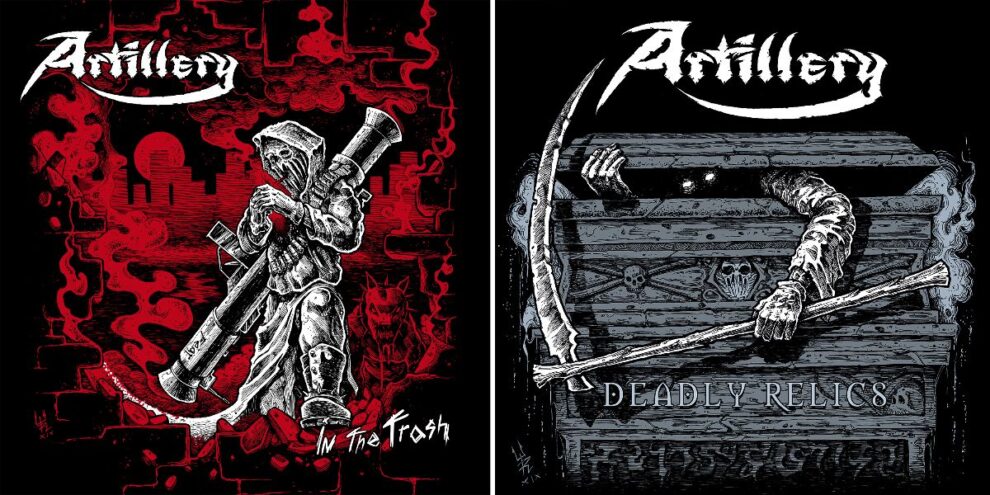 I think at least the name of this band is well-known to everyone in, more or less, my age and even every Metal-head who loves Thrash Metal! Anyways, I was thinking long time if I shouldn’t write one and the same review for both “Deadly Relict” and “”In the Trash” albums. This is truth is I’m comfortable person or maybe even quite lazy one and always looking for the easiest and the less tiring solution. But here the thing is about something totally else! I decided to do it, coz both albums are compilations and both return to early days of this, at least as for me, legendary band. These two last words mean that I delete information about the band as itself – you know, bio, discography and so on.

Actually there’s one more reason why I’m writing one review for two albums is that I always had a problem with reviewing such releases of such bands. There’s possibility I overrate knowledge of some people, but somehow I never what to write to seem for smart one. Other thing is that I assume that readers know about in this case Artillery as much as I do and like it as much as I do. By the way, albums contain songs taken from demos, but also “Fear of Tomorrow” and so on. Well, “Deadly…” is re-issue and this is very fresh – released December 6th last year, so 21 years after its debut.

Music is of course old school (well, in these times when songs was created, it was the only way to play this music) Thrash Metal. Maybe coz of near of Germany influences of classic bands from there are very easy to notice. But I can also hear some American ones. And have connotations with some Japanese Thrash Metal  horde – for me classic, too. Everything is like it should be in this music. Of course someone could say, and it’d be truth in some way, that heard music like that thousands times and Danish discover anything new. But hey… These songs was written in the first half of 80’s mostly. And it changes the standpoint, doesn’t it?!?

I know I’m not objective on here, because Artillery was one of these bands I grew up on, but… I recommend these stuffs, just like other ones of Danish kings of Thrash Metal, to all Thrashers. Older ones will listen to it with some note of nostalgia and younger should to do it to learn history of the genre. I’ll surely back to “Deadly…” and “In the Trash” as often as I can!

“In the Trash” track-list: