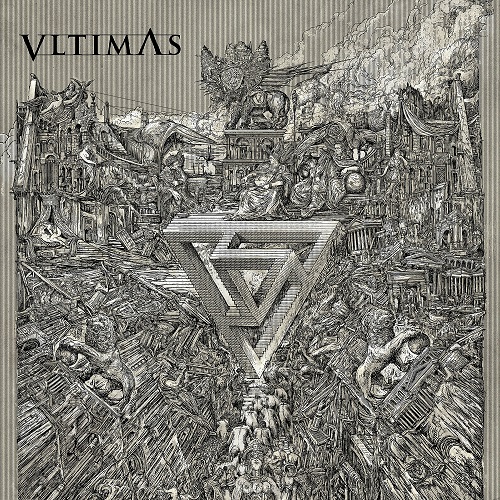 What do you get if you mix ex Mayhem and Aura Noir guitarist, Cryptopsy drummer and ex Morbid Angel bassist and vocalist? If your answer is VLTIMAS, continue reading. If you never heard of those bands, than you are at wrong page!

Metal cowboy, David Vincent, worldwide known as former Morbid Angel bassist and vocalist, despite believes, is not the band mastermind. But, take it slow…

After he left Morbid Angel in 1996 to join his wife in industrial metal band Genitortuers, David faced with the rage of Morbid fans (at least in my home country). I am open minded girl, so no matter how much I love Morbid Angel, I have never thought, even said he made mistake leaving the band. Come on! How many of you guys would support your girlfriends/wives? Or how many of you girls would like your boyfriend/husband joins your band?

In 2004 Evil D. was back to Morbid Angel and in 2015 he made final decision: leaving Morbid Angel for good. Should I mention I am Morbid? Or Terrorizer? Or his other generous contributions?

On the other side, we have Rune Eriksen, former Mayhem (1994-2008) and current Aura Noir guitarist. Well, Earth Electric, Twillight of the Gods, Mezzerschmitt are still his active bands, and in past he can add to his biography membership in Nader Sadek, Ava Inferi and Testimony…

I took the order I thought it was the logical one for most of fans. But… This is the truth. Rune was the one who had hand full of riffs he had no idea what to do with, so he suggested to Flo to form the band after he presented him piece of art. In reality, David Vincent is the last band member who joined VLTIMAS.

Why am I writing so many facts? So you can get the impression who you are dealing with here. So, when we sum Evil D, Blasphemer and Flo, of course, result is super group VLTIMAS!

In 2019, almost each album of each artist is available on digital platforms. So, “Something Wicked Marches In” is available in full on YT since March 28th, the day before the album was officially released.  So, I was waiting and waiting till I got real copy of the album so I can write review.

Although I heard from fans here and there, ”Something Wicked Marches” In is just a missing link in Morbid Angel career, I really can not accept that in full. Yeah, maybe David Vincent is the most recognizable figure here, but you can not underestimate talent, skills and experience of Blasphemer and Mounier. VLTIMAS brings the best they could ever bring from their rich careers. This is no competition, all the band members seem to be equal, no one is dominant in contributing, creating and delivering great death metal album.

The title song is the slower one, but don′t be tricked. Album in general is overloaded with power, fury, anger, evil, majestic riffs, killer drumming and recognizable vocal, clean enough to understand each word.

Of course, production is at high level, as expected. If I would have to pick three outstanding songs, hardly, but hardly I would choose “Praevalidus”, “Total Destroy” and “Everlasting”.

I would like to mention the man who is responsible for cover art, Polish artist Zbigniew M. Bielak. His outstanding style perfectly fits to atmosphere VLTIMAS created musically.

Back on top of review… “Something Wicked Marches In” is not just a missing link in Morbid Angel career, as many describes. I would say it is finally cutting the umbilical cord.

Although each band member brings his recognizable style, the truth is that VLTIMAS is unique band, and consequence is great album.