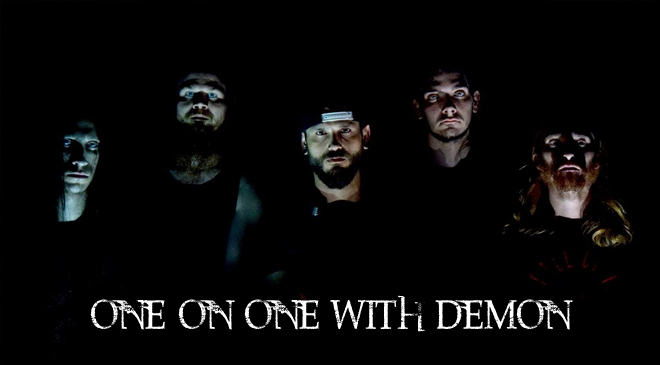 1. How the band started?

“Curse the Flesh was formed when Myself (Duel Guess), our vocalist Jeremy Dahmer, and our former guitar player Wes Cook were meeting up to basically hang out, drink and write the type of music we tended to listen to on a regular basis. I was in a band at the time which was not creatively satisfying for me so when Wes told me about this guy named Jeremy who was working on putting an extreme metal band together, my interest was piqued to say the least. Within a few months we had some really solid songs that sounded nothing like what was going on here in Mobile, Al. Most metal bands in this area never tended to stray from either thrash metal or some form of southern groove, think Pantera but not nearly as fun to listen to over the years. It was at this point that we realized that we had something cool on our hands here. We recorded a few songs and then began the process of finding an extreme metal drummer capable of blast beats which in this area is actually pretty rare.
I think that is when Curse the Flesh was truly born when we went from being a solid idea to actively bringing our vision of what metal should be in our area to life. That vision was extreme metal that was actually catchy. Shorter songs with huge hooks. We were focused on songwriting, not overly flashy musical techniques. Not convoluted song structures. Not that we don’t like those things because we do, many of our favorite bands do just that, it just was not and never will be what Curse the Flesh represents.”

2. Which band is your role model?

“It is difficult for me to say just one band because i’ve been influenced by so many, but The Black Dahlia Murder has always inspired
me because of their relentless touring, amazing live shows, pheneomenal lyrics and soaring harmonies. I also really enjoyed their
happy go lucky image instead of the typical grim or brutal images most metal bands tend to portray. Although more traditionally
speaking, I would not be the type of guitar player I am today or playing this type of music if I had not discovered both Dissection
and Emperor. Those bands personified evil and beauty. Their melodies and lyrics always spirited me away to a special place in my
imagination that only black metal can truly take me to.”

3. What do You think about today’s metal scene?

“I have mixed feelings about it. In many ways I think it is healthy, bands like Mastodon and Ghost are breaking into the mainstream while the nderground bands still maintain their hold on the scene. I will say that perhaps the music itself is maybe a bit stagnant. There hasn’t been a huge shift in what metal is or sounds like in a long time but technically speaking, the shit still works. I still buy Cannibal Corpse albums on day 1 even though they haven’t changed in nearly 30 years. I suppose I wish there were more bands able to break into the underground upper echelon, but it seems like a band has to be around for 5-7 years before most metalheads start to respect anything they do. You’ve got to pay your dues, you know? But here in the Gulf Coast we’re currently experiencing a big resurgence of extreme metal. Alot of black metal too. At this point there are a ton of really good bands out here and new ones popping up daily it seems like. Panama City has Lustravi. Dothan has Evenfall. New Orleans has Sytherium and countless others. Here in Mobile we have Gathering Ov Vultures, Oracle, Excessum and ourselves. The talent pool here is getting crazy. But the crowds are showing up and the bands and venues are making money. As long as that continues, it will keep growing. I believe young southerners kind of got tired of being represented poorly by its music scene and are in the process of taking it back. I expect some of these acts to really break out in the next couple of years.”

5. Why did you decide to play this musical direction?

“Blackened melodic death metal is the best type of metal to me and I’m saddened by the fact that it kind of went away after 2000 or so. The soaring harmonies of melo death bands like At the Gates that give you this sense of epicness and adventure combined with the sound of evil emanating from bands like Emperor comes together to form the purest form of metal. This sub-genre can be heavy, fast, slow, brooding, evil, and beautiful all at the same time. There is a song we have called “”The Shroud.”” The chorus melody perfectly embodies why I chose to walk this path as a musician. It just takes me away, and that is why we all listen to music in the first place right? To be taken away. Metal is the only music that gives me chills, and Blackened Melo death is my favorite sort of metal.”

6. Where would you most like to play a concert?

“It has always been a dream of mine to play in Europe where metal as a whole is more respected and revered than it is here in the states. Germany would have to be my dream concert. Wacken Open Air would be a dream come true. I would be content getting run over by a bus after that. Japan would be amazing as well”

7. Do you think that the metal festivals are enough visited?

“Not in this country no, Ozzfest went away, and the only replacement we got was the Rockstar Mayhem Festival which also just folded after 7 years or so. We still have Knotfest, GWAR-B-Q, Summer Slaughter and other summer festivals which I attend regularly but the turnout to those fluctuates year by year depending which bands are playing. There have been some disappointing turnouts some years for sure even if the bands playing are incredible.”

8. What are you listening to the most right now?

9. What would you say to your fans?

I suppose if we had them all in a room. We’d just have to thank them for their outpouring of support for what we’re doing. We hoped but, when we started, everyone was telling us there was no way we could do this type of music here in this area and we’d really like to thank them for proving those people wrong. The people attending these shows are what is making this possible.

10. What are your plans for the future?

My name is Jelena Indjic.  I chose the name Ajatara because it is a demon that has the most influence in my creative work.