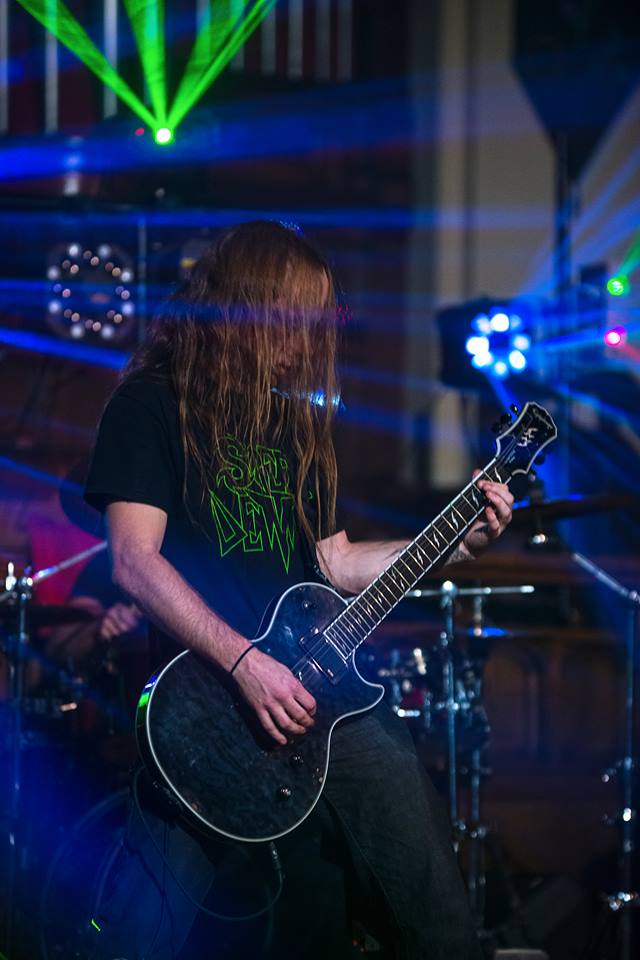 Interview with Jonathan Hayward guitarist of groove thrash metal band Dark Messiah about how was the band formed, about metal music, their first EP ”Dark Messiah”, their music video ”No Soul To Sell” and many more info down below:

1.How was the band formed, and why did you start playing metal music in general?

I started playing metal music as a teenager. As soon as I started hearing it I felt an urge to be a part of something so spectacular. So I picked up a guitar and started developing my style early on. I worked in a local metal bar and saw bands perform every weekend. I thought it would be great to have a band of my own to play on stage and music to share with the world. A few years passed and I decided it was time to start putting something together. The band started around August, 2015. I grew an online network of local musicians and started looking for people to jam with. Once we had enough members and a few songs under our belt we started playing shows right away. Then we came up with some more songs and just never stopped writing and performing.

2. Tell me something about you debut EP ”Dark Messiah”, about the reactions to it and the lyrics of the songs?

The lyrics are pretty gloomy and sometimes a bit twisted but that’s what you should expect out of metal isn’t it? A lot of the songs speak of what we think would happen if a “Dark Messiah” existed on this earth. Sort of a fictional tale if you think of it that way. With a subject matter like that and a genre of metal that doesn’t usually go there reactions are never really in the middle. People seem to either love it or hate it.

In my opinion and no particular order:

4.If you could have a chance to change something in metal music, what it would be?

I wouldn’t want to change anything cause I’d hate to effect what metal has become, but if I have to choose something it would probably be the death of Dimebag Darrell.

5. In your opinion, which song is the best from your debut EP, and which one fans liked and reacted to most?

I don’t like to pick favourites with our own songs but the 2 that people react to the most often are “No Soul To Sell” and “Death From Above.”

6. Which gig that you played is the best one, in your opinion?

One of my favourite gigs is when we opened for Wednesday 13 at a local venue called The Pyramid.

7. Your latest music video for ”No Soul To Sell” is just amazing, tell me the true meaning of the song?

The song is about someone trying to sell his soul to the devil in exchange for something but he eventually realizes that the devil has tricked him and he has no soul to sell.

8. Which band is your role model, if you have any?

There are a lot of bands I’ve been influenced by or looked up to for most of my life. Pantera and Metallica are probably on the top of that list.

We got back from a tour of Western Canada about a month and a half ago. Once we have new music we’ll most likely hit the rest of the country.

We’re currently writing new songs for a full length album. We are really looking forward to that. We just want our fans to know that we appreciate all their support and that we’ll be back hitting familiar places and playing new ones soon enough.