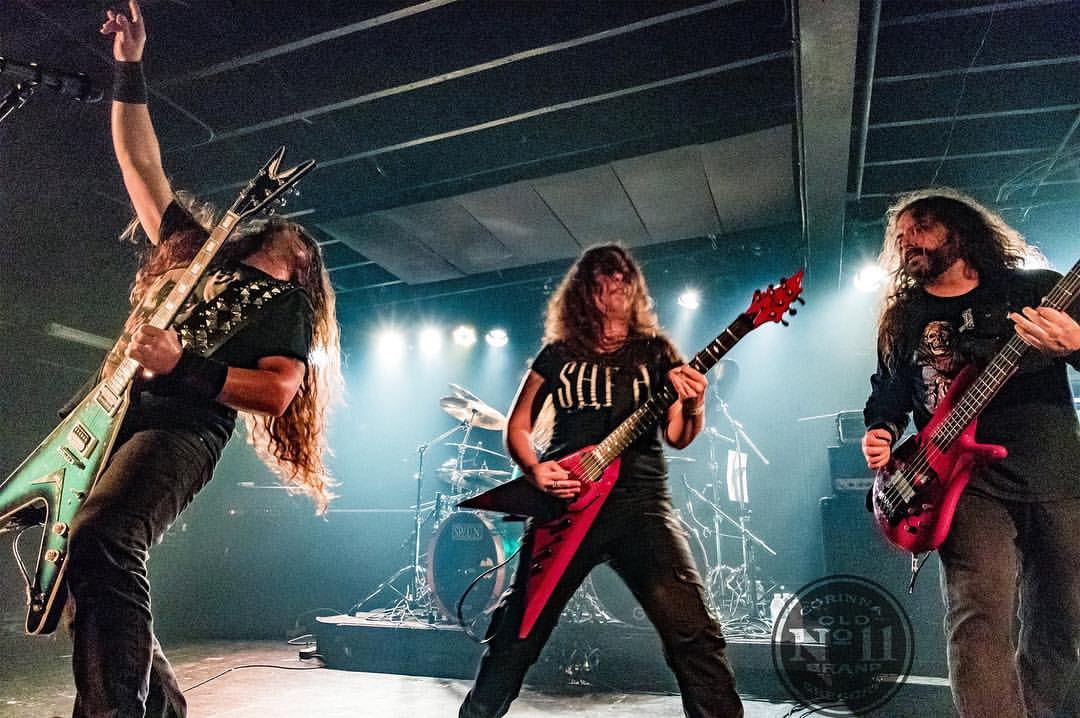 1.How the band started?

Back in 2012, long time friend Steve Brogden asked me, Don Lauder, if I was interested in slinging some Thrash Metal bass for him and I said yes, of course. At the time, Steve was playing in the band Cage with drummer Norm Leggio and guitarist Dave Garcia. Since Cage was at a temporary pause at the moment, we decided to see if Norm and Dave wanted to jam with us. They did and we wrote some songs and got Nukem rolling. Shortly after, life happens and Dave decided to step down from Nukem. We’ve played out as a 3 piece band which is great, but every now and then our really good friend, Laura Christine, steps in and makes us a 4 piece, which is better in a lot of ways.

2.Which band is your role model?

Wow, I don’t know if I can narrow it down to just 1 band. All my favorites have unique qualities that I try and make into my own. I love their music of course, but their personal endeavors as a band influences me as well. I’ll just name a few: Overkill for their unending drive of always delivering the music. MetallicA for their tenacity of being at the top of the Metal food chain. TestAmenT for their perseverance.

3.What do you think about today’s metal scene?

The Metal scene on the global scale is bigger than ever! The number of sub genres of Metal is insane and there seems to be more and more popping up each year. I find that totally awesome and inspiring. The fact that there are that many Metalheads out there playing music is just a beautiful thing.

Nukem’s music is just straight up Old School Thrash Metal. The kind we all grew up with and loved. With this project we decided to have fun and play what comes natural to us. Nothing forced and nothing fake.

5.Why did you decide to play this musical direction?

I think Steve, Norm, and myself were all on the same page with our music careers. We’ve all been in bands that pushed the envelope in the ways of technical Metal. Looking back to those times, I think we realized that we just wanted to Thrash it up again.

6.Where would you most like to play a concert?

I would love to play Waken Open Air. I think that’s my Holy Grail for venues. But not to take away from anywhere else. I’ll play any place, any time. I’ll play your backyard party!

7.Do you think that the metal festivals are enough visited?

Here in the USA? No because we don’t have enough of them. I get really envious when I see all the awesome festivals happening elsewhere in the world.

8.What are you listening to the most right now?

All the awesome new Metal that’s been released in 2016! This year has really sucked in just about everything but Metal releases. It seems like everyone and they’re grandma delivered the goods this year. New releases from Metal Church, Death Angel, Flotsam & Jetsam, TestAmenT, Opeth, Meshuggah, Anthrax, and I have to say that I am looking forward to this new MetallicA.

9.What would you say to your fans?

Guys! Thanks for all your support and for even listening to Nukem. We really can’t have this much fun without all of you. I can speak for the rest of the band when I say, we want you guys to be apart of the Nukem Family!

10.What are your plans for the future?

It’s 12 noon for me right now, so maybe lunch? haha Well, the album just released in September so we are going to continue to push the hell out of it and at the same time, we have 3 songs in the works for album #2. So it will be a good balance of that along with making new friends and getting ourselves to a venue near you!