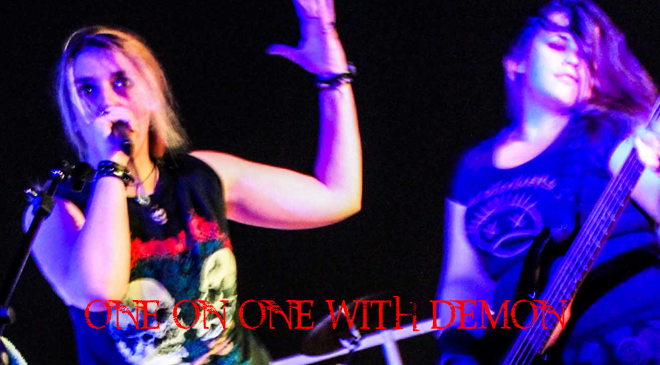 1. How the band started?

Band started in 2013. when singer Sanja Drča and guitarist Aleksandra Petrović contacted drummer Selena Simić. We wanted to make a band that is inspired by Arch Enemy. When we first met each other, we thought it would be great to make it all-female band. Shortly after, Anja Tvrtković and Tijana Milivojević joined the band, and we started taking things more seriously. We started working on our own music and now we have a music video for our first single “Vengeance” and one recorded EP that is waiting to be released.

2. Which band is your role model?

Mostly Arch Enemy, but we are also influenced by Death, In Flames, Kreator and Pantera.

3. What do You think about today’s metal scene?

Well, things aren’t that great. Many people claim that they listen to metal, but not many of them are visiting concerts or supporting the scene with things such as buying music or merchandise. Metal bands in Serbia don’t have any mainstream media coverage or support from cultural institutions. I think that these things affect bands more than we think. Also, there aren’t many clubs where metal bands can play.

Giving our best and moving boundaries with every metal step.

5. Why did you decide to play this musical direction?

Almost all the girls from the band listen to melodic death metal in their spare time. We also think that there aren’t many death metal bands in Serbia, and we wanted to change that, because we are deeply connected to the lyrics and energy of that music genre.

6. Where would you most like to play a concert?

In Japan, definitely. Since I started playing I was hearing stories about how awesome audience in Japan is and how big is their love for metal. Besides Japan, we would like to perform on festivals in Serbia and Balkan.

7. Do you think that the metal festivals are enough visited?

I don’t think that metal festivals in Serbia are visited enough. Maybe it’s because of the lack of mainstream media support, maybe because financial situation isn’t the best at the moment. But I honestly hope that we will have more audience for metal in the future.

8. What are you listening to the most right now?

I (Selena, the drummer) am mostly listening to Arch Enemy, Trivium and Amaranthe. But right now, I’m listening to Nervosa, because I’m still under the impression of the concert we had with them few days ago.

9. What would you say to your fans?

That we appreciate their support and that they mean so much to us. We don’t have fan base that big, but it always feels good to see familiar faces in the audience. Also, stay metal and strong!

10. What are your plans for the future?

Our plan is to release our EP really soon. Also, we are planning to enter the studio in winter to record our debut album.

My name is Jelena Indjic.  I chose the name Ajatara because it is a demon that has the most influence in my creative work.