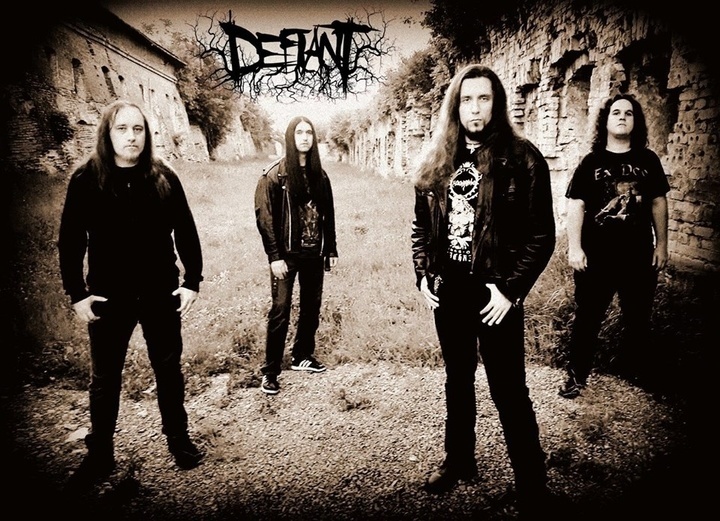 In this interview Demon Reports Journalist Vladimir Cincovic was talking  with Croatian death/black metal masters Defiant– about their upcoming new release, their latest release “Insurrection Icon” how is it different from their previous releases, about their line-up changes, and how did they manage to make music with the line-up changes, also about the difference between worldwide metal scene compared to Balkan metal scene, more exclusive details, below:

1.Tell me about Defiant, the music influences, inspiration for lyrics, and most importantly, role models if you have them? How did you decide to create this band?

I played in a few bands before Defiant and because of many reasons, well, mostly because of human nature and negative approach, all those bands never moved further than a few local shows, in the best case.
So i decided to form something more serious and here we are, still alive after almost 15 years.

2. Your released the latest album “Insurrection Icon” in 2018, tell me how is it different from your other releases?

Kris: It ‘s different a lot, if you’re compare it with our first album and it is different from our last album “Morbid Spiritual Illness” as a big step forward. Finally, we found ourselves in our latest work and that is what we are looking for. We will continue this road.

Tomislav: Every album in a way marks the certain moment in time of the band. During the years people change, their personality and what do you want to write about.

3.How did you manage to create your music, with all of these line-up changes, through the history of the band?

Kris: It was not a problem for me, people coming and people go. Music stays. It was not affected on my part of creating the songs in any way.

Tomislav: It was pretty much a testing field can Kris and I work together.  First, he writes the music, and then I lay on the vocals and work around the rough edges.

Tomislav: At first was intimidating, I was fan of the band before I took up the microphone. It took some time to find my footing, especially when I was back in the day in another band and stretched thin a bit with other obligations.  Now it’s simple as breathing.

5.As a band, you had also changed the musical influences on few of your releases, experimenting with the genres, tell me why did you do it, and did this helped you guys make more success?

Kris: The main reason was because I like to experiment but also i do not like to move a lot “out of box”. It was always a death metal combining with some other sub-genres. Every album that we make had their audience, it’s a normal thing. When the band makes experiment, with their music, it could be tricky, you can lose some fans but also you can get others who will like the new stuff. It was same thing with us. People who like our first album probably do not like much our latest album because it’s completely different. But , I’ll leave that to our fans.

Tomislav: I would not call it experimentation, its simply to maintain your own identity and sound while stayingfresh from album to album.

6.You recorded your first album in 2006 “The End of Beginning”, how do you feel about it know? Was it hard for your guys in the beginning to promote your band?

Kris: it was a really different time with different people in the band. Actually, the album was very successful in Croatia and Balkan area. It was self-released and we make a breakthrough in local underground metal scene.

7.Are you going to record a new album, and when it will be released, as well which title it will have?

Tomislav: We are hitting the studio next summer, very possibly again in Hellsound studio with Honza Kapak as producer. If everything goes well, this time in the next year would be out. That is the plan.

Well, we do want to spoil everything, don’t we?

8.What are your thoughts on the global metal scene compared to the Balkan metal scene, what is the crucial difference between those two?

Tomislav: It is the same; the main difference is the size. Every country has its own mentality and that mirrors the crowd.

9.Are you going to have a new influence maybe, a darker one on the upcoming new release?

Tomislav: We have around 9 skeleton songs and I’m laying on the vocals as we speak. It is darker if that is possible since the last two albums. It’s definitely more atmospheric.

10. Do you have a massage for your fans and audience, as well?

Tomislav: I would like to send big regards to everyone supporting the band and extreme music. You know who you are. Stay heavy.

Check out the live music video for the “One With Chaos”, here: