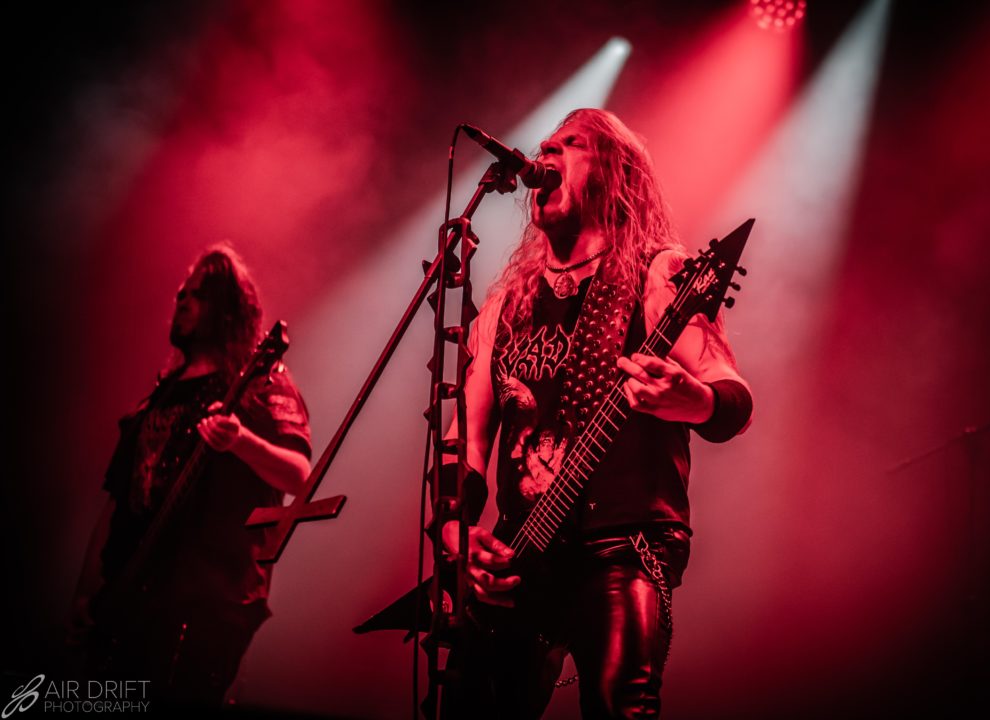 In this interview with Vocalist and Guitarist Piotr Wiwczarek from Polish death metal titans Vader. One of the Journalist from Demon Reports magazine Tomislav Kuternik was talking about their new upcoming album “Solitude in Madness”, about the video for “The Witcher” game, about the whole situation of the Corona virus/Covid19, his thoughts on writing blocks and Tomislav’s introduction for this interview with all of exclusive details, below:

Vader as a name in extreme metal genre transcends a lot, named as one of the first death metal bands in its genre and breaking many grounds in metal, still to this day. Including their unstoppable break neck amount of touring which rarely hits a stop sign.

But it did not stopped Piotr and myself use the power of the internet to chat about the current situation, the album, bands anniversary, ”The Witcher” and many more.

So blast some Vader, enjoy and stay safe out there. 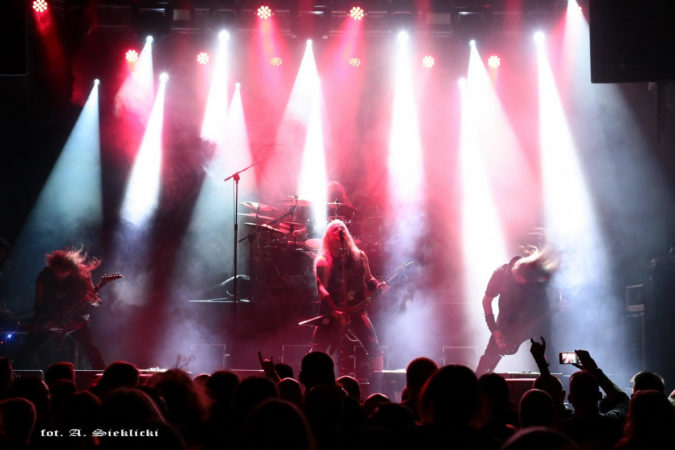 1.Pozdrowienia Peter! This kind of interviews usually starts with ”How the tour is going”, but with the current situation as it is, the first question would be more akin to ”How are you guys doing”? Most of us at the Demon Reports are having anger issues.

”Actually we all ARE in war with a plague at the moment. The enemy is cruel and smart but proper tactic can eliminate it. Discipline, understanding and cooperation is the only way to fight any virus. This situation is something new and shocking for our generations but – remember – this is not the first nor the last time, when a plague attacks humanity. There will be causalities but it will be gone at the end tho. Optimism is always much better weapon then losing a hope. And us? We had to end the tour in Europe after five shows that we have played. We came back home and now all are grounded and waiting till the global situation will clear up a bit. We’re spending time with our Families and doing some work in our houses. Coming Spring is giving much new energy even in those grim times of pandemia. We all are in touch online and there are no symptoms of virus so far.”

2.For this tour you choose ‘’De Profundis’’, ‘’Litany’’ and ‘’The Art of War’’ which are the absolute bible for any Vader and death metal fans, but why did you pick those three among all other killer records?

”2020 is a very anniversary year for Vader. All those titles, you mention, were released 25 years (De Profundis), 20 years (Litany) and 15 years (The Art of War) ago. We could even add „Morbid Reich” 2nd demo that really changed all situation for the band and was out 30 years ago. All those titles are very important in our history and also one of those most favorite among our Fans. 2020 is also a year zero for Vader’s new album. However, „Solitude in Madness” will be out in May – as planned, and we scheduled to tour with that one not before September. That’s why we named all concerts before that date as „Anniversary Tour”, where we focused on mentioned above albums. All in all we prepared set list, that was more like „Vader hit medley”… and Fans really liked that idea.”

3.Recently you announced your new album ‘’Solitude in Madness’’ which will be out on May 1th on Nuclear Blast. What can you tell us about the concept of the album and how it will differ from the last records?

”Most crucial difference is new studio and producer. This resulted in further changes. After almost 15 years we left Hertz Studios to change a general feel and look at Vader sound itself. Scott Atkins and His Grindstone Studio refreshed bands formula and gave a new breath for the style. New album sounds sharper and brighter but with much air and punch. I loved to work with Wieslawski Bros in Hertz but we all needed a change. Sound and work system became just too routinely, even if we were still developing in cooperation. Scott motivated us in the way that nobody did before. For example I never before spent so much time with vocal recording. I never really need it. In effect we recoded the best sounding voice in my history as a singer. Or maybe rather „as a screamer” 😉 And this is just one factor.”

4. ‘’Solitude in Madness’’ was recorded in Grindstone Studio in England; what drove you there to record with Scott Atkins? I know that your first recording in UK has not went well as planned.

”We were looking for a studio since the end of 2018. There were some options – like Eric Rutan Studio in Florida. Situation but forced us to wait and then change the plans. James came up with an idea of recording in Grindstone Studio, because He was already working in that one and knew Scott pretty well. That was another reason, why I gave a try. I wanted James to feel good during recordings to let Him do His best. All was but seriously delated and we started recordings in early May. Soon we started touring season too so the whole session was divided and spread in time indeed. I hate to work in studio and play shows in the same time and won’t ever do that again. Just too much trouble with travelling. The album was done and ready by the end of August.” 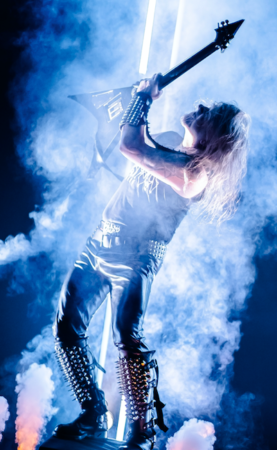 5.This is you 12th album with original material (not counting Future of the Past and XXV), with some bands struggling after their fifth album to write songs you keep releasing new killer records steadily for now almost 30 years.

”Well. What can I say? I am glad, that Fans like us. This is most motivating and best support for any band.”

6.Where do you draw you inspiration and did your style of writing changed over the years?

” However trivial it sounds, I write about my life with all included. I only transform my emotions, thoughts and feelings into some stories and that specific language, you can find on Vader’s albums. The only think, that was changed in last three and half decades is, that I am more experienced as men and musician and I have so much more to say.”

7. Did you ever had a writer’s block? How do you deal with it?

” „A writer’s block”??? And what the Hell does that mean? There is still so much to write about. Just look around! We live in „perfect” world to make a Metal song about, don’t we?”

8.Over the last decade, Vader has a steady line up with Spider on guitars, Hall on bass and James on drums, how is the comradery between you? I know that there are some age gaps.

” „Age gaps” You said? hehehe… Indeed. James could be my son. However in this point age differences do not matter. Not for a band with such experience. Present line up is the most stable in Vader history and that definitely helps in any work and inside cooperation. I did experience many changes and I know, how to deal with that – however I feel better to work with men I know well. It is obvious. What does help is, that we all live separated in time between all touring and typical bands life. Vader is probably one of most busy live acting band ever and we spend enough time together. This system helps to „keep the fire” and avoid of routine.”

9.With a lot of people, Vader was one of those bands that opened the world of extreme metal for them. Why do you think is that?

”I can be just very happy, that Vader keeps Metal spirit and spreads that among st following Maniacs. I am still huge Metal Fan, who additional had a chance and will to create and play it too. I also had (and still have) „my bands”, which inspired me and made me hungry for more! I know that great feeling and I am glad, that Vader can deliver that to the others. What else should I add?”

10.Aside great metal bands from Poland, your other popular import are The Witcher books, video games and now most currently TV series for Netflix. You did the video ”Sword of the Witcher” for the first game back in 2007. Are you happy with Henry Cavil in the titular role?

” Oh yes! He caught that character perfectly – in my opinion. The movie looks more like the game then and I am sure, that CD RED’s „The Witcher” was a decisive factor here.  I am not that huge game Fan, but you should talk to Hal 😉 He’s a real freak of the story – game included. „Sword of the Witcher” was or me an experiment. I never did any soundtrack or music like that before. That was just before the game  – and then the story – became so popular in the world. Composing the song I wanted to keep Vader spirit but do it in less extreme way tho. Using some real game soundtrack inspiration I made quite nice consensus, I guess. Sometimes we even play that song live.”

11.What is the current state of the tour at this moment? We really hope to see you again as soon as possible.

”Nobody knows. We are in the extraordinary global situation, which we all must understand. Virus is hard -to-kill motherfucker IF You don’t follow some serious procedure. We will eliminate this problem as soon as we all understand it and cooperate worldwide. However this will be just a next grim story in our lives sooner or later. Plagues wake up sometimes. Maybe we should all use that time to slow down a bit and think about that senseless race (sic!)?” 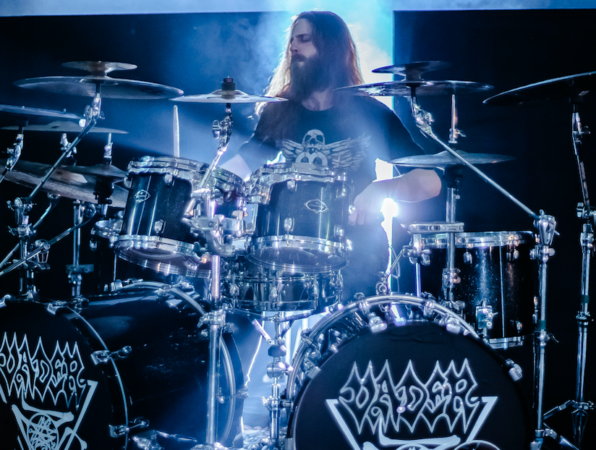 Check out the new music video for the “Into Oblivion”, here: