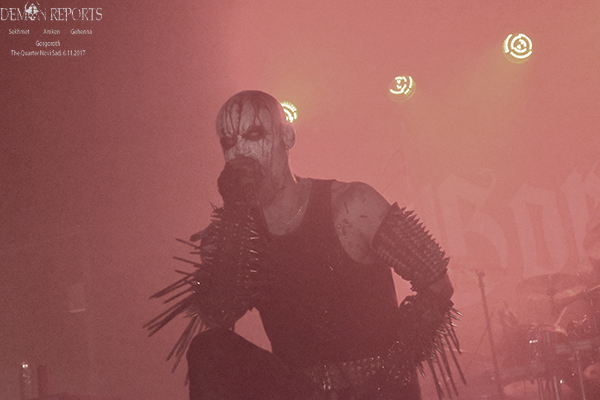 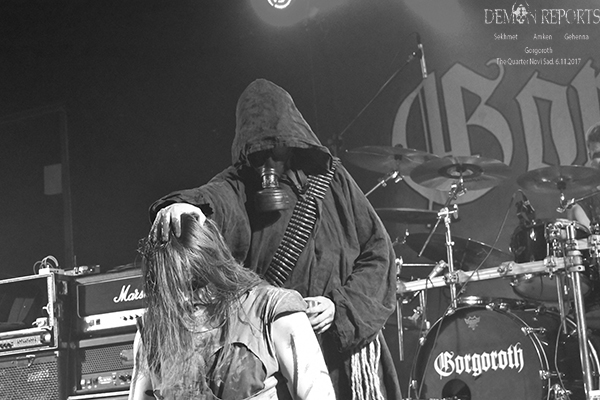 This show was something special full of energy, the sound was perfect, all four bands were technically perfect and the crowd enjoyed every minute of the show and of course, Gorgoroth showed their perfect balance with their crushing sound added with some touch of pure evil and darkness.

The first support act to play on the stage was Czech black metal band Sekhmet. What I like about this guys is how they’ve entertained the crowd all the time they had that pure destructive energy in their performance, on each songs the crowd reacted very good, the crowd was enjoying fully the concert. I can say this is one of the rare band’s that can present pure raw black metal music in such a devastating way, I love the part when the guy with a gas mask came to the stage it was incredible, so the band played their songs and went off the stage and the second support act can demonize the stage. 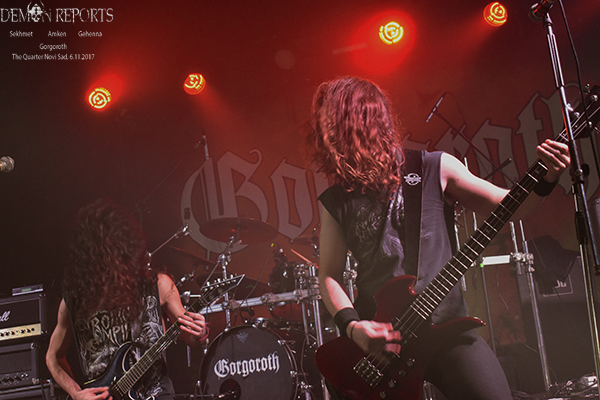 The second band to play was Greek thrash metal band Amken. These guys are pure old school underground thrash metal, they presented this genre of metal in the best possible way, the technical part was beyond amazing, they were so into it, that you can see their souls in the guitars. They greeted the crowd few times, they were there to kick some ass with some good metal music, well they were not in so good position, because mainly the crowd were black metal fans, but they enjoy it they saw their talent and their fierce kickass energy, which is great that one thrash metal band can stand side by side with other bands that are completely different genre of metal.  The crowd enjoyed the show, and it was time for the band to leave the stage, they were satisfied with the reactions of the crowd. 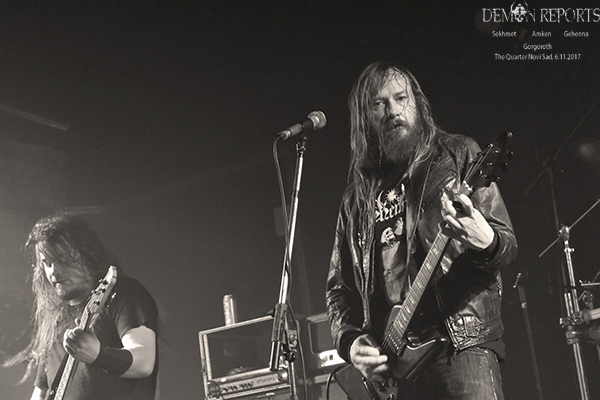 The third band to play was Norwegian black metal monsters Gehenna. This band are the pure masters of the black metal genre, technically they are the best band on the show, every sound and riff were so accurate and precise. The first song that they played was ”Adimirion Black” and of course the crowd went crazy when they started playing the first song and the madness went on through the whole show. The second song that they played was ”Devils Work”, the third one was ”Abbatoir”. the fourth was ”Angelmaker”, the crowd gets crazier and crazier as the time passes went’s on, the fifth song was ”Death To Them All” and the mayhem was present in the audience when they heard this song, the six was ”Nine Circles of Torture”. the seventh ”Werewolf”, the eight was ”Ad Arma”, the nine-song was ”Pallbearer”, the ten-song was ”New Blood” and the last song was ”Serene Faces”, the band blow up the stage they were amazing, but the negative side was that they left without a word, they just left the fans without thanking  for being there, as a black metal band this is not some unusual thing, it just my personal opinion about it. The time has come for the legends to take over the stage the main act. 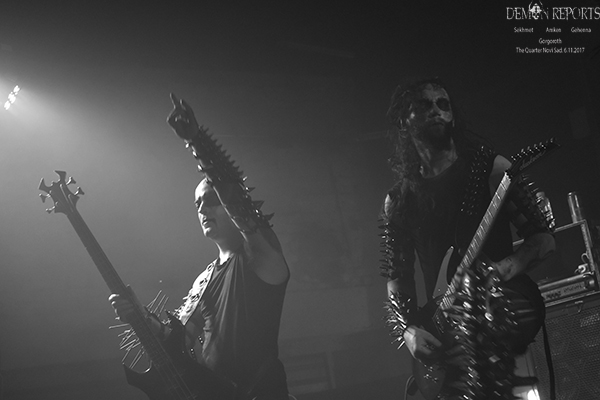 The Black metal legends Gorgoroth came to the stage, the ovations and euphoria were beyond amazing. 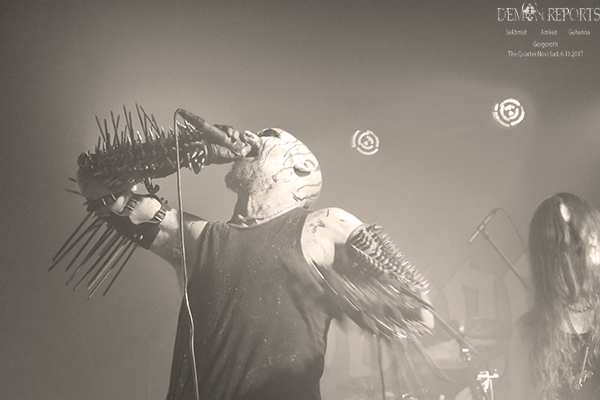 I can say about their show that is was brutal and great as hell itself, the vocalist Hoest  of the band Taake showed his impressive vocal skills and that he can have a fucking awesome time on the stage, he was possessed basically, the screams and the performance left the fans in the hypnotized state of mind, they truly enjoyed the show. The band played songs from their last album ”Instinctus Bestialis”, the crowd reacted good to the songs, but they were waiting for the older stuff from the band and they played it for them with some killing riffs and brutality in their eyes. They played some old songs that are very known to the crowd and they reacted every time like they were possessed by the sound with full darkness in their eyes, hypnotized in every way. The best reactions were to the song ”Destroyer” and it was one of their last song on the show, they were mosh pits, headbanging, and singing, it was magical. The time has come for the band to end the show and they did in the black metal style they gave the crowd the best they can.

This show was an amazing experience for all the fans of the genre. It was unique and a fucking good time. Black metal apocalypse dominated the club and Gorgoroth showed the way they are legends, Long live black metal and metal music.

Lacuna Coil got down with sickness, a night of pure demonstration of power and might!
Folk metal storm, will conquer all!!!