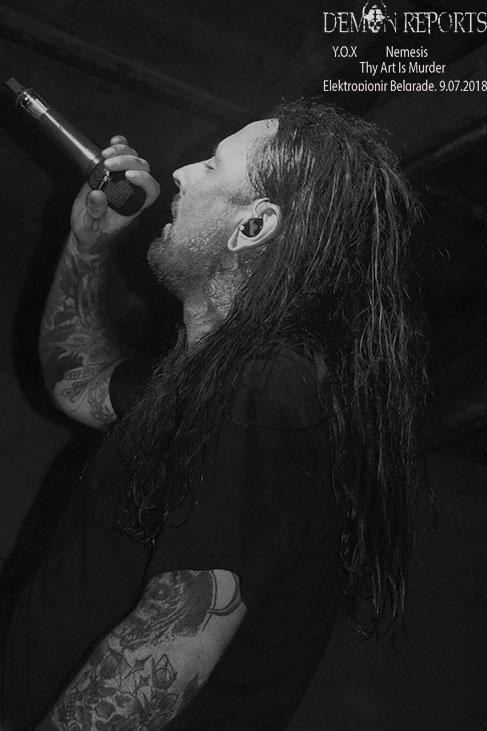 The Australian deathcore giants Thy Art Is Murder held a concert as a part of their European tour ” in Belgrade at club Elektropionir on July 9th with amazing support acts and they are Serbian melodic death metal band Nemesis and deathcore Serbian metal band Y.O.X. This show was a demonstration of the full power of the extreme genre, everything was in the place, the whole package, the energy of the crowd of the band, a pure  brutal destruction tearing the soul of the each living thing in the club, with some raw riffs and some amazing growls that maybe woke up the dead! 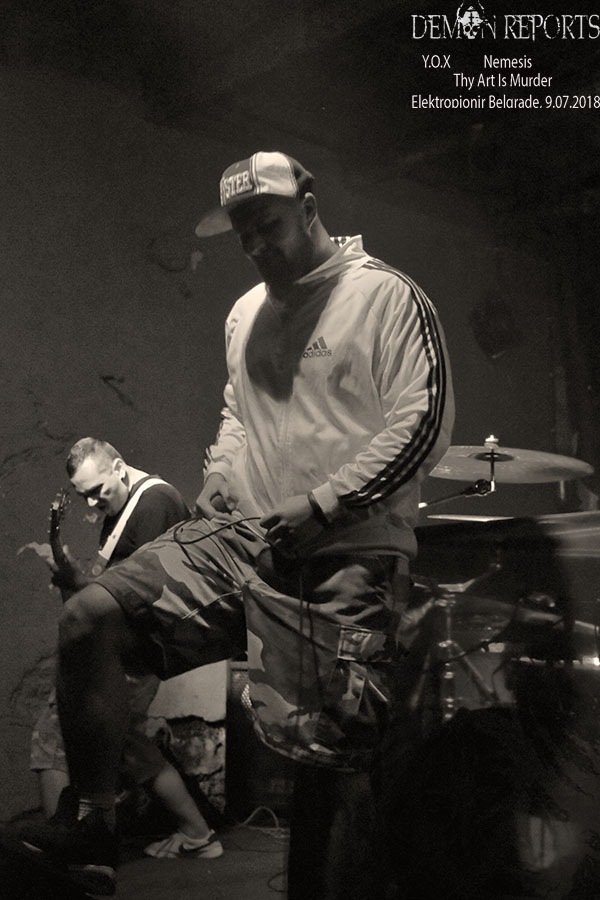 The club has opened at 8 p.m. The crowd had arrived in small numbers, but as the time passed by the club was full, whole deathcore scene of Serbia was in one place united. 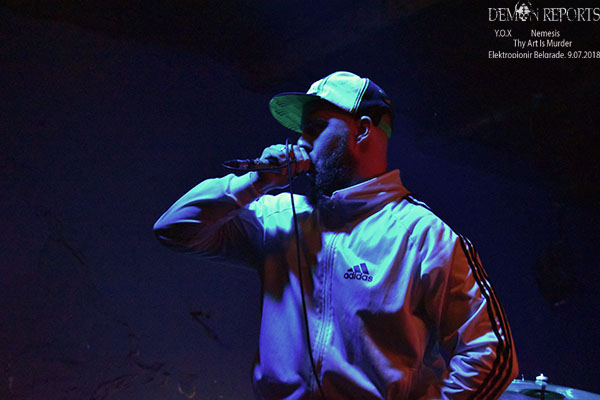 First Support act to perform was Serbian death-core metal band Y.O.X. I can say about this guy they can bring it like the band, they shake up to the whole club, with their brutal riffs and the amazing brutal vocals, they kept the crowd on their feet all the time and alive until they can stand no more and of course the mosh pits, the crowd really had fan, they were in trance. So their performance can be described in one word, we are here to dominate you, whatever you like it or not. So the band left the stage and the fans of the band and the other crowd was pretty satisfied, they have that quality of the big bands, and they are going to be very known, because they are specific, their sound is unique, and the stage act is like a fire pit in hell, you can only enjoy it or die. 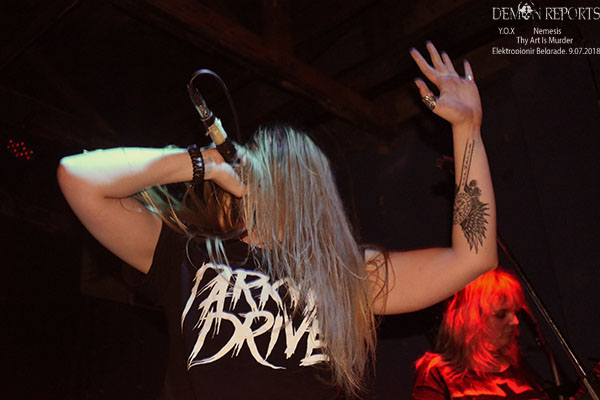 The second support acts all female Serbian melodic death metal Nemesis. Well there was discrimination in the past about the females being in metal bands, and in this band, there are five women kicking ass like real man, they have that warrior attitude in their shows and that’s why this band is going to be something amazing all over the world, they are different than the other female metal bands. They began at 9.15 p.m and they rocked the stage in their own style. They have a soul, it can be seen on their shows that they are into their music,  they are one with their music, the rage the fire in their eyes while performing is priceless. 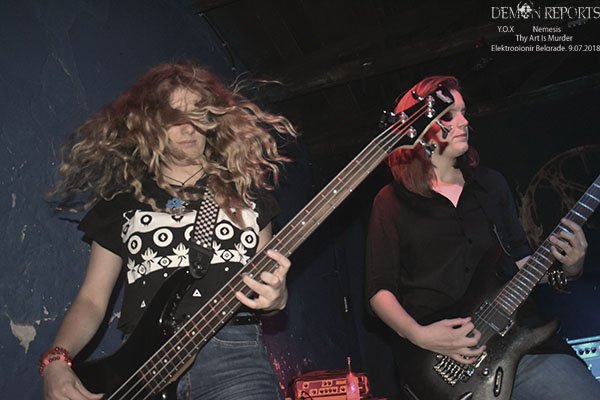 They played their new songs like “Dead End”, and the other ones like “Pandemonium” and “Uprising”, these girls were all over the place playing these songs. 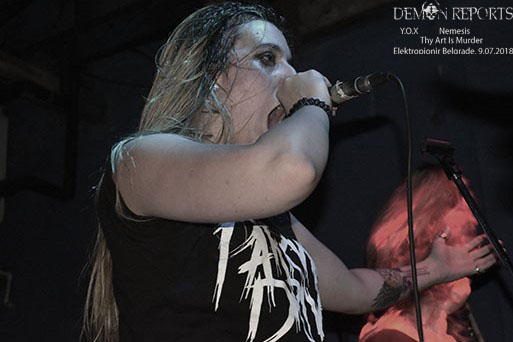 The vocalist Sanja Drca was amazing her energy and that kickass attitude is just great, she was in that rage trance mood totally dominating the stage. 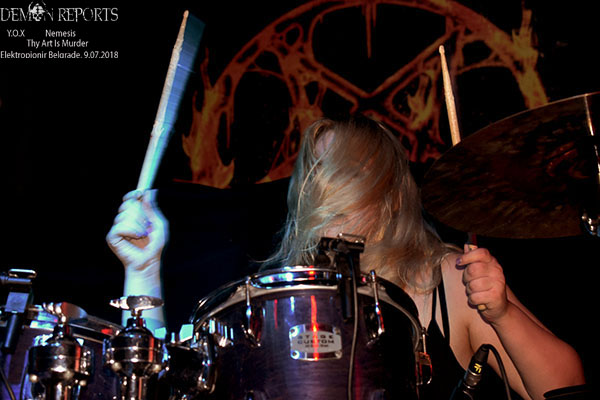 The drummer Selena Simic was amazing as well with her drumming skills and Aleksandra Petrovic with her magical guitar skills, it was just a brutal magical show delivered with some dark love from ladies. 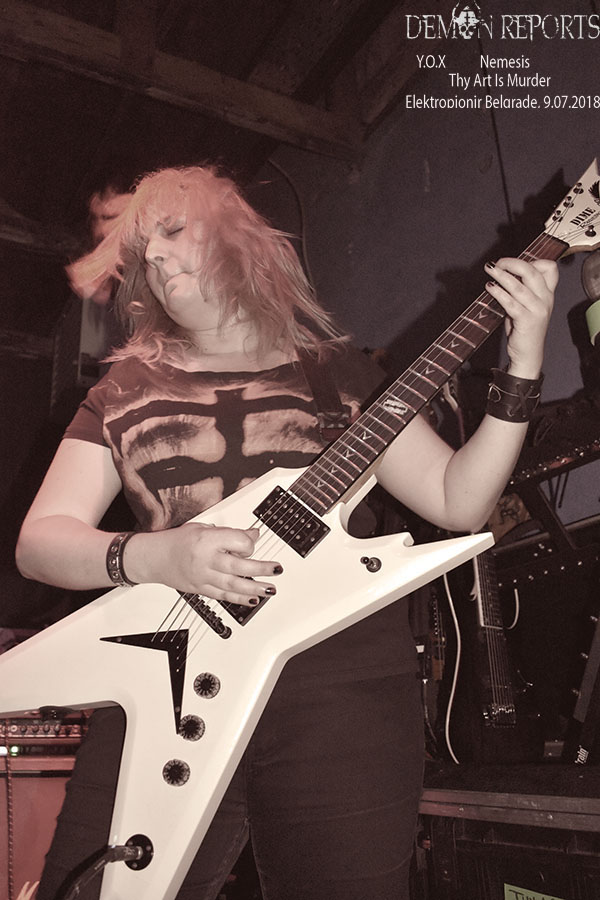 So it doesn’t matter to be male to completely dominate the stage and to be brutal and had that raw energy and passion for the music, the crowd enjoyed every minute of their show. The last song that they played was “Living Dead People”. So the ladies got off the stage and the further destruction can begin. 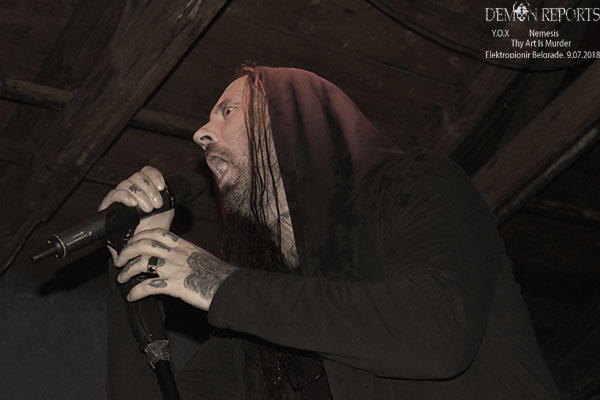 Now was the time for the Deathcore monsters Thy Art Is Murder to destroy every living soul in the club and to live the eternal memory in their minds. So they were preparing for the show while the fans were waiting, the someone for the technical team played the song as the introduction for the band  from Vengaboys called  ”We like to party”, it’s was a weird atmosphere because you think now the metalheads and core fans are going to be pissed off, but no, they laughed, dance to it, they had fun, and the band showed their comedian side to the crowd and they enjoy it very much. 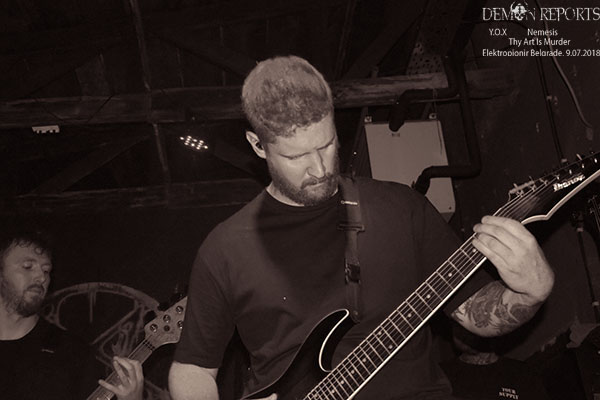 The band got on the stage at 10.05 p.m and the brutal Monday in a brutal style can begin, fans got insane they were singing, there were mosh pits, crowd diving, some of them love the band so much that they wanted to go on the stage with them to sing with them, amazing positive atmosphere and everybody enjoy it with some pure raw power of the crushings riffs and vocals by Vocalist CJ McMahon and the drummer  is a beast, he has that beast mode drumming skills that tear up ears for sure, but in this case it’s a good thing. 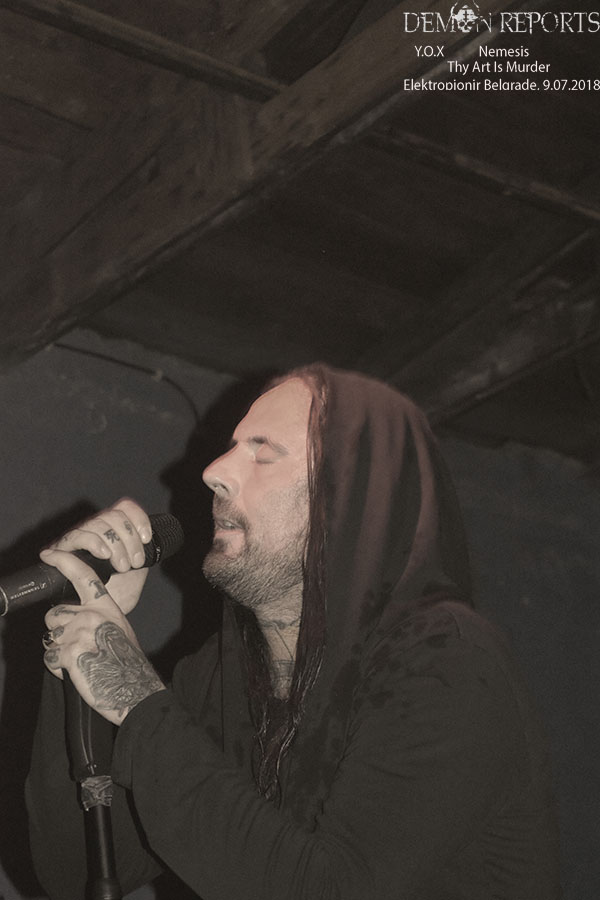 The first song that they played was ”Dear Desolation” from their latest release called “Dear Desolation”, the crowd went insane all over the place the atmosphere was so pumped with energy, that in some moment’s you can feel it in the air all over the place. The second song that they played was  ”Puppet Master” and the crowd reacted very well to it too, the third one was “Holy War” and the crowd sang the song whole the time and they enjoy every second of it. the fourth song was “The Purest Strain of Hate” as the time passed the reactions were better and better, the fifth song that band was   “Absolute Genocide” and the genocide in the crowd began, they were some crazy moshpits, crowd divings and some other crazy stuff and crazy moments. 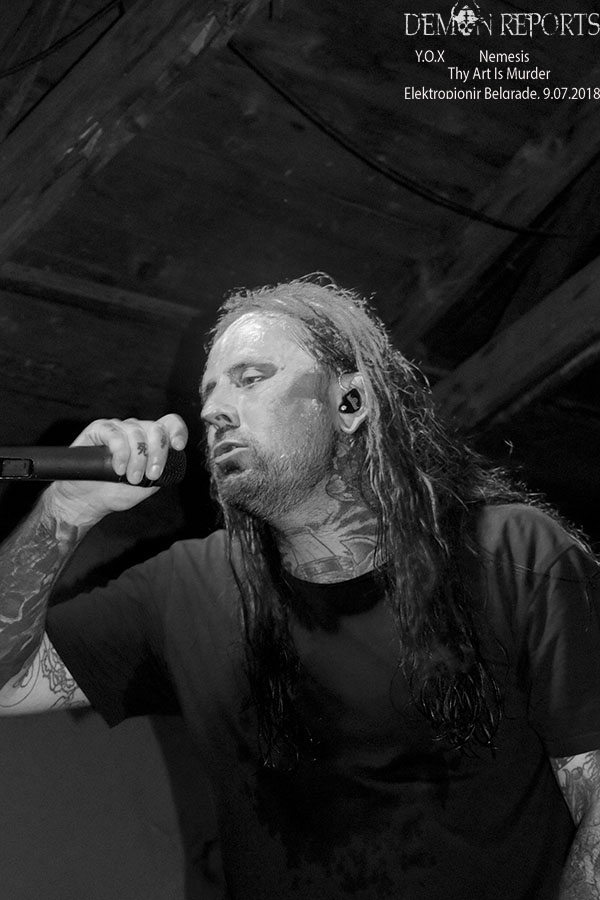 The next was a changed cover of the Industrial German legends Rammstein “Du Hast”, I like the more extreme version with growls it was so amazing and brutal and had that insane dark vibe. The band mention the Serbian female melodic death metal Nemesis the Vocalist CJ McMahon was amazed by them and with the fact that there are five girls in the band, so much that the band dedicated their next song “The Son of Misery”, he even mentioned that he likes Belgrade and the fact that it’s by the river and that he loves the Controversial Serbian film “Serbian Film” and added this as the message: ”The World is a fucked up place with fucked up things” and then he had ovations of the crowd. The last song that band played was “Reign of Darkness” from their album “Hate” from the 2012 year. After that, the band got off the stage and the already tired fans could not stand anymore, they did a great job they destroyed the club into pieces. 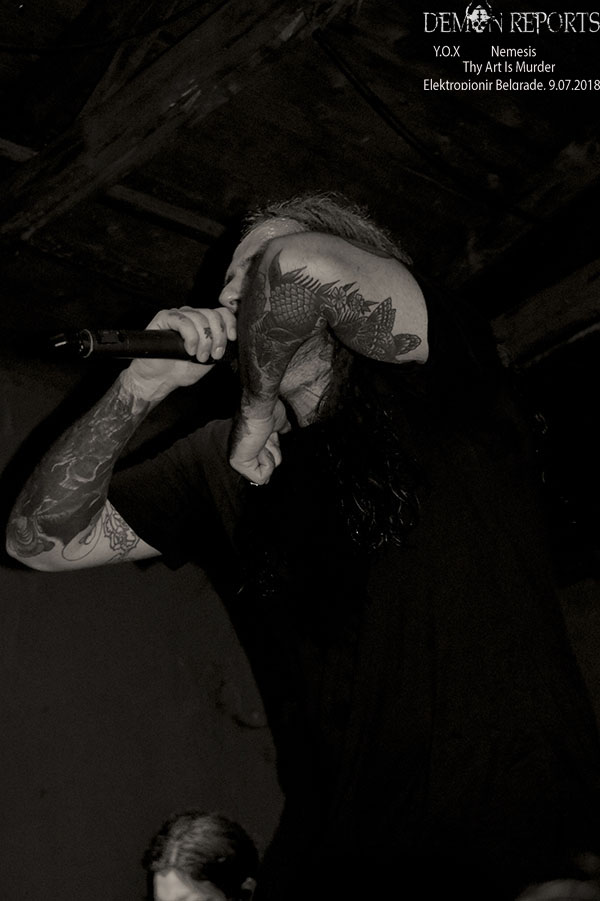 This night was like some long dream where you can enjoy music forever, but you know every dream must stop in a meantime, positive atmosphere, amazing kickass bands, if this show was a dream it’s the one worth living for, the dream that never ends. Amazing riffs and sound, the Brutal Monday filled with some quality music, energy and extreme metal that can blow your mind, a night of pure chaos and destruction that will be remembered, and for the fans, this night will stay forever in their hearts and minds.

Live Report: Night of the hearts on fire, while the hammer falls!
Avan-garde destruction in some creative style!