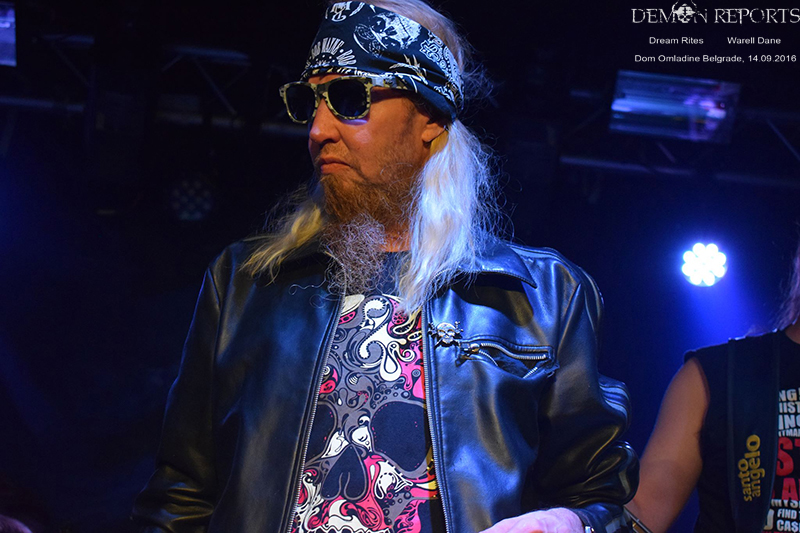 The celebration and dominance of heavy metal

Warrel Dane held a amazing concert in Belgrade with his band in club of Dom Omladine. The show was about to began, the fans were coming to see one and only Warrel Dane from Legendary metal bands Nevermore and Sanctuary. The concert had to begin at 20:30, but it started at 21:30, because of the opening act Dream Rites, the van broke down. But DreamRites made it after all, and played at Dom Omladine.

The first act was Greek heavy metal band Dream Riters. Crowd was already in large numbers at club.The band started playing, there were screaming, ovations. They played in 80’s metal style, to me they look like they transported themself’s in 21 century, mindblowing. Killer and melodic sound, badass riffs, the fans enjoy it. Each song was better than another, there were headbanging, mosh pits and a very cool atmosphere was in the air. The band went off the stage, they were satisfied with smile on their faces.

The time has come for Legendary Singer Warrel Dane with his band to play. They were extreme ovations and screaming, the female fans were crying,happy to see Warrel. The show began with intro (Precognition), and after that the first song was “Narcosyntesys”, the crowd went crazy with headbanging, mosh pits. The next song was “We Disintegrate”, the crowd reacted with ovations too, and also the same thing as reaction as in the first song, the crowd went even crazier.

The ninth song was “ Insignificant”, then the apocylpse among the crowd started, there were heabanging, screaming, crowd diving. The tenth song was “Believe in Nothing”, crowd was a bit tired, but they have the power to continue to sing with Warrell and the band.

The eleventh song was “Dead Heart from the Dead World” public was excited about this song, but they were a little static at the moment, but they woke up and went insane, as usual with the every song on the concert too. Band got of the stage, the fans and crowd scream their name to get back, they got back for the first bis, and the intro came along, after that the next song there are going to play was “Enemies of Reality”, the crowd got excited, and they were in the crazy good mood again.

Eighteenth song was “Born” the last song for the end of the show, crowd was satisfied and very happy. The band got off the stage for sure now, leaving the fans in confused and bewildered. I can say for this concert that is was one of the most possitive and mindblowing, one of the best. Warrel Dane proved why he is the Legend in a metal scene, and a big name, but also a cool normal guy, that has his moments with fans. Amazing concert, great fun, heavy metal to the core and to the end.