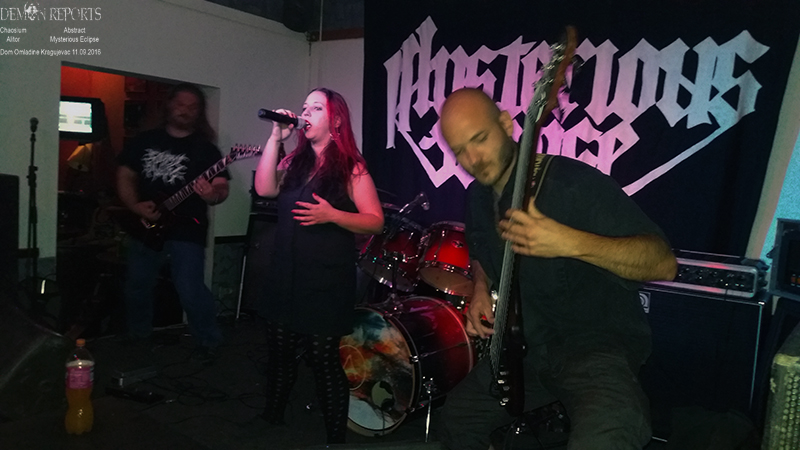 Feel the power in underground of metal

Four great bands held a awesome concert in Kragujevac at Dom Omladine. While approuching the Dom Omladine, crowd was there in a few numbers, waiting for the bands to start playing. Crowd was excited and they wanted to heard these bands rocking the house.

First band to play was Chaosium Serbian death metal, they started playing loud and very brutal, the band was in a good mood, they were jumping screaming, the crowd supported them, they were screaming with them, also they had a special guest who was a singer also, they finished the show, and they went of the stage.

The second band that was playing was Serbian thrash metal band Alitor.They had some tehnical problems, but they have solved the problem. The show began, they were furious, loud and they have pure thrash metal anger in their eyes, the crowd was jumping, headbanging, screaming and totally supporting the band. The band said Hello to Kragujevac, and how are you in some moments on the show. They went off the stage, the crowd was sreaming and happy.

The third band was Slovenian industrial metal band Abstract, this masters of insrtumental metal, rock the house literally, the frontman was in very good and positive mood, he was jumping, screaming,the crowd was sreaming with him, they were headbanging and trance moments beetween the crowd and the fans, they played loud, with style and powerful riffs. The frontman was speaking Serbian a little bit, so he communicate with the crowd very well, and he thank them for being there. The band went off the stage and they were very happy and satisfied, so were the fans and crowd too.

The fourth band was Slovenian melodic blackened death metal band Mysterious Eclipse, the band gets on the stage, and the show has began. They were very interesting, the female singer was brutal, with her amazing vocals and growls. The fans and crowd were screaming. The band played very well, they were static but its ok, the show was great. They went off the stage, and the concert was officaly over.I would like to say that this concert demonstrated the full power of underground metal bands, and their quality, how the underground scene is powerful and awesome. The concert was very good, in underground metal style.