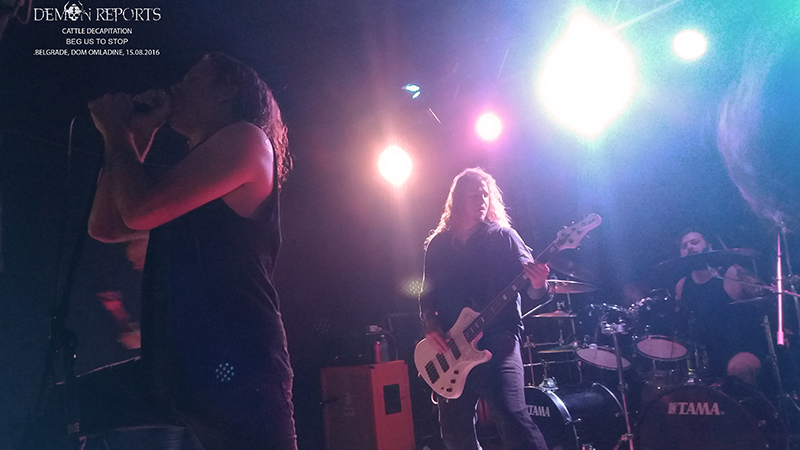 Death apocalypse at its full power

Legendary American deathgrind metal band held for the first a concert in Belgrade,Serbia at Dom Omladine. While approaching the small hall of Dom Omladine, it can be seen that the fans of this band, were waiting for their favorite band to start playing. The fans waited , with a delay of half an hour for bands begin to play. Finally the fans entered the hall.

The support act was a Serbian deathgrind metal band Beg Us To Stop, the show begun. The hall was half empty, the band played brutal, fierce, loud, chaotic. The crowd supported them all the time, there were mosh pits, crowd diving, headbanging, complete madness. The played on, the crowd was satisfied, and they left the stage.

Cattle Decapitation enters the stage, there were ovations right from the start. The one problem with the band was that the sound was too loud, so the singers vocal, could not be heard. The band played insane, fierce, loud and brutal. The singer said that they are for the first time here in Belgrade, and that they are glad to be hear for the first time.There was headbanging, screaming, mosh pits, crowd diving, complete insanity among the crowd. The band played each song with, real deathgrind power. This band proved that they are master of this genre, but the sound and the acoustic was too loud, and that was the big problem, but any way great band, played a real good show for the true hardcore fans, and they enjoy it completely, killer show, with very toxic and amazing music.

Feel the power in underground of metal
Female metal power