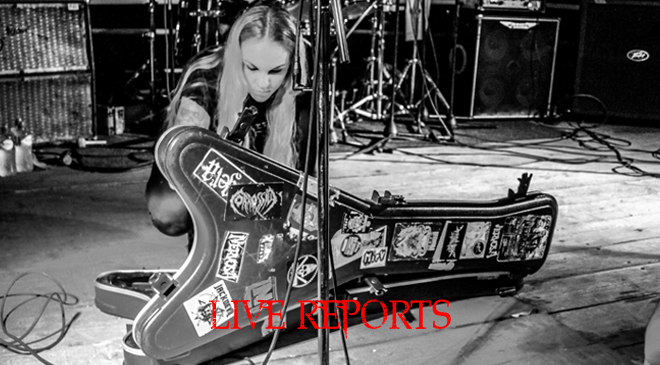 Nemesis, Jenner, Wolf‘Hunger, Nervosa, War-Head- On the boat in Belgrade, Legendary female- Brazillian thrash metal band Nervosa held the concert. When approuching the boad, it can be seen that the fans where waiting to enter the boad. The small crowd in front of the boad, where true fans of the band, and the other bands, and they where here to gave a support to all of the bands on the boad, the bands were late about 30 minutes, so after that the show has begone.

The first act to perform was Serbian female melodic death metal Nemesis. The ladies were amazing , they were fearless, fast, loud, and in a good mood. The crowd support them fully, they were headbanging, screaming, cheering. The band also played a covers of, Legendary Swedish melodic death metal band Arch Enemy, the songs where “Nemesis“and “War Eternal“, The live covers where awesome, the vocalist Sanja, completly demonstrated the power of melodic death metal, with her vocals, and she sounded almost the same, as the singers of Arch Enemy. The girls rocked the boad they were in good mood, and the crowd was saticfied.

The second act was Serbian female speed thrash metal band Jenner, the crowd was cheering, supporting the band, and every time they finished the song, the band got the ovation, the crow hadbanged, screamed. The band played cover of the Legendary American thrash metal band Megadeth, and the song was “Tornado of Souls“, the cover was very interesting in female version, it gave the song something different to it, the rest of the band totally mastered the song, awesome live cover. The band was playing fast, loud, powerful. The band got of the stage, leaving the fans saticfied and happy. The third act was Serbian black thrash metal band Wolf‘s Hunger they got on the stage, and the show began. The crowd was hadbanging, screaming, the band played brutal, raw, loud, fast. They had a special guests Predrag Milovanovic and Srcan Ranisavljevic from the Serbian thrash hardcore black  metal band Putrid Blood , Predrag perfomed with the band a punk song, and the crowd reacted very good to it.The band keep on playing on and they left the stage.

The finally, the time has come for the Legendary Thrash metal band Nervosa to play. They got on the stage, and the crowd went wild, crazy, totaly insane, they played brutal, fast, fearless, with the anger in their eyes, like real thrash metal band. The singer Fernanda said, thank you for coming, we are glad to be first time in Belgrade, and the show continued, there were headbangging, screaming, ovations every time they announce the next song, they played there songs from their new album Agony, and the older songs too, the most amazing thing was that they let the crowd sing with them on the stage, it was insane the fans sing the songs with them on the stage, amazing and awesome atmosphere, the time went on, and the band played their last song, and got of the stage.

The last band was Croatian death thrash metal band War-Head, they played brutal, fast, loud, fearless. The band played on, the crowd was saticfied, and they left the stage. Nervosa showed why the girl power in metal is needed, they showed they can be brutal, as every thrash metal band out there, The Legendary band gave a night to remember, metal steel in thrash metal style.

Death apocalypse at its full power
Metal chaos and destruction