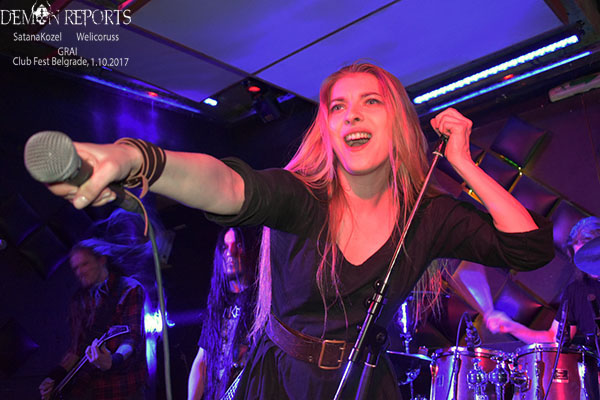 On October 1st at Club Fest three amazing band SatanaKozel, Welicoruss, GRAI held a concert in Belgrade as a part of their Balkan tour. My opinion of this show is that it was amazing, all three bands demonstrated the true power of metal and the atmosphere in the audience was magical, the bands and the audience enjoyed the show. 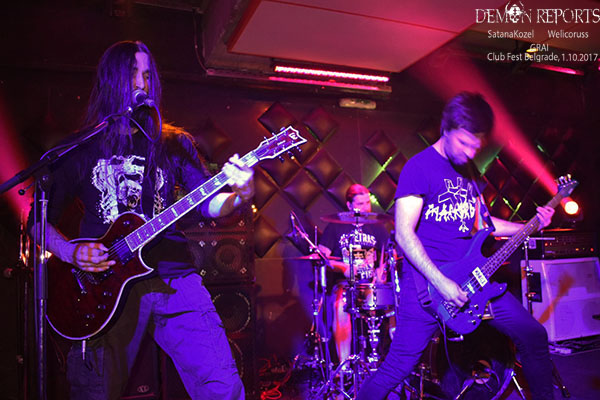 The first band to open the show was russian folk metal band SatanaKozel. The band started playing with some heavy riffs, the vocalist rocked the stage, his growl’s were some kind of mix of giant monster and demon in one, the audience was in trance and the band of course too.

Then they began to play a first song, but before that was intro, “Битва”, the crowd reacted very good to the band, they were listening to all of the song with attention, the second one was ”Kузнец”, great song the reactions of the crowd is getting better and better, the third one was ”Mедведь”, the reactions are quite good to this one, the fourth one was ”Bъюга”, the fifth one was ”Musta Mado”and the final one was ”Баня”. The reactions of the crowd were amazing for this band, they were headbaning and satisfied with the hole performance it was just great, sadly they had three more songs to play, but the pedal of dummer Nickolai Kuskov was broken. The band left the stage satisifed with performance although there were technical problems. 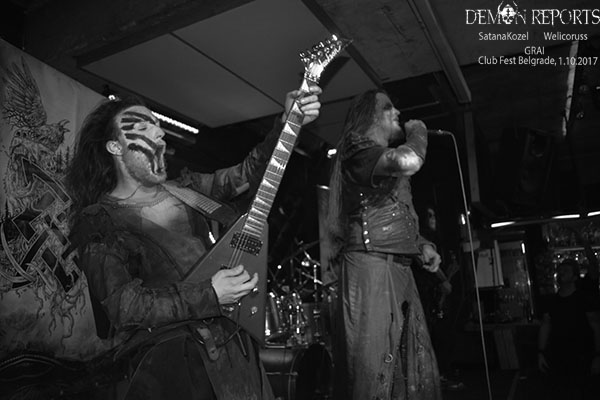 The second band to perform was czech/russian symphonic black metal band Welicoruss. This band is unique with their performance and with that dark atmosphere in their music yet melodic, they owned the stage, they were so in a good mood, like they were in their own little dark world, the crowd was hypnotized by them, for me personally it was something amazing. The first song that they where playing was ”Az Esm” in English ”I am”, before that there was intro, the second one was ”Bridge of Hope”, after this one they played the third one ”Kharnha”.

I like how this band have made all the time, this insane dark atmosphere on the concert, like you were in Siberian forest all the time, and the vocalist Alexey Boganov dominated the stage with his unclean and clean vocals with pure pagan power. The forth song on the playlist was ”Slavonic Power”, great song, amazing reactions by crowd, fifth song coming up and it was ”Slava Russi”, the crowd is in trance, and they liked this song in a special way, six song was ”Voice Of Millennium”, then the seventh song ”Outsider”, eight song was Woloshba, the ninth song was  ”Sons of The North” the most famous song by the band, the crowd got tired, but there were some loyal fans that headbang to their music until the end. The last song that they played was ”Waterwalking”,then the band left the stage and they were satisfied with their performance.

At last the third band that played was russian  folk metal giants GRAI. This band rocked the stage in every possible way. Irina Zybina vocalist of the band had a chat with audience in russian and then she had some jokes about that the Serbian audience don’t understand them and that they don’t understand Serbian too, it was a funny moment on the concert. 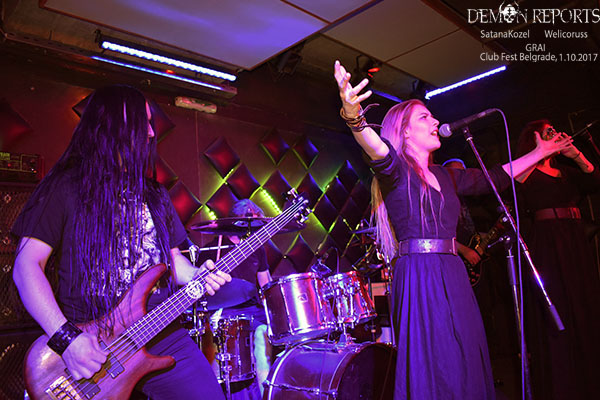 The first song was intro  ”Марево” intro song and the crowd was impatient from the beginning of the concert to hear all of the songs. The second one  was ”Поступь зимы”, crowd goes crazy and the show can began. Irina had that magical slavic influence all of the time on the concert, she has that magical hypnotic voice that left everyone in the club hypnotized, the power of her voice and energy is insane in a positive way. The true slavic warriors destroyed the hole club into pieces with some slavic warrior power, that tear up the walls and the souls too. The third song that they played was ”Млада”, the crowd gets more crazier and crazier, they began dancing in treditional folk style and headbang, the fourth song was ”Тень”, the atmosphere was like a fire pit in hell, but the crowd was very happy, with the sound and the fire in their hearts, the fifth song was ”Мгла со мной”, the six song was ”Береза”, the seveth song was ”В объятиях Мары” the most best reactions were to this song, crowd was dancing and singing out loud to this song, it was some pure slavic atmosphere, the ancestors were proud for sure, the eight song was  ”Доня”, the ninth song was ”Крепкая охота”, the tenth song was ”Крепкая охота”, the eleven song was ”Пшеничная”, and the last one they played was ”Лешак”.

This concert was something special, it had that vibe of pure slavic destruction, the whole magic of it. The negative thing about this, is that it should have been more crowd on the concert, they deserved it. Pure chaos in a positive way, the night of pure russian metal destruction, that left a mark on a soul.

Black metal madness and destruction in some true crushing style!
From the might of melodic death metal, we will rise!