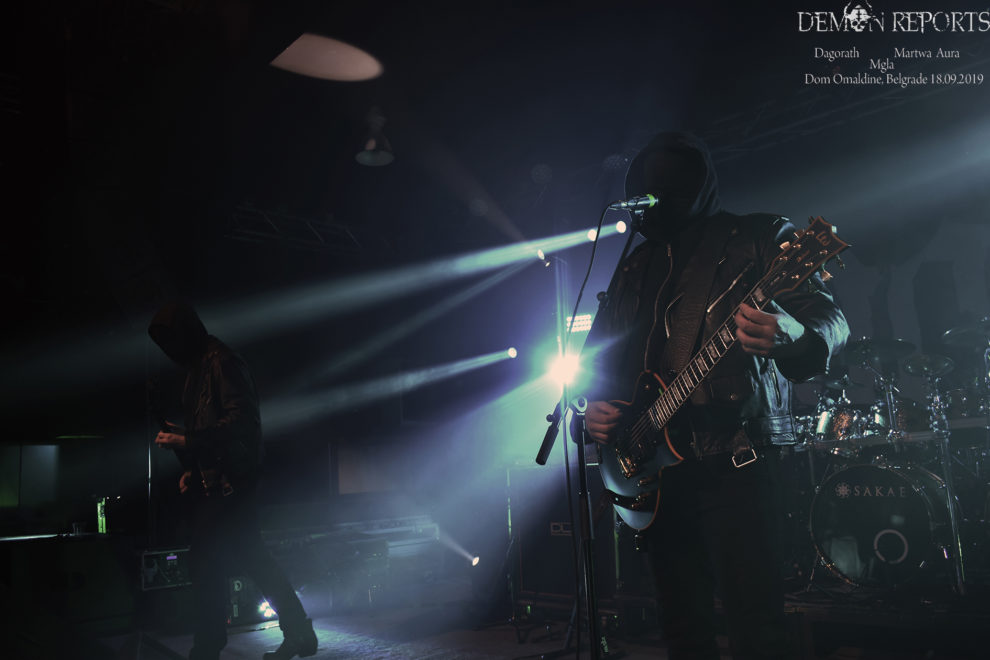 Mgla is the band that became a high ranked band on the black metal scene – and got to the position to be one of the best black metal acts currently, for a short period of time. The hall at Dom Omladine was full, there were not enough locations, just for standing at the gig. This show was a demonstration of what black metal is all about, the true meaning of it, with riffs, atmosphere, the scene and most importantly that underground vibe, from which black metal was created. It was a gig, that had everything that one black metal fan would expect to hear and watch.

At the beginning of the show, the first band was preparing themselves for their performance. On the stage, at the first sigh, there were big candles, scene was just great, indicating that their show is going to be a black metal blaster, that will dominate the crowd in the hall. 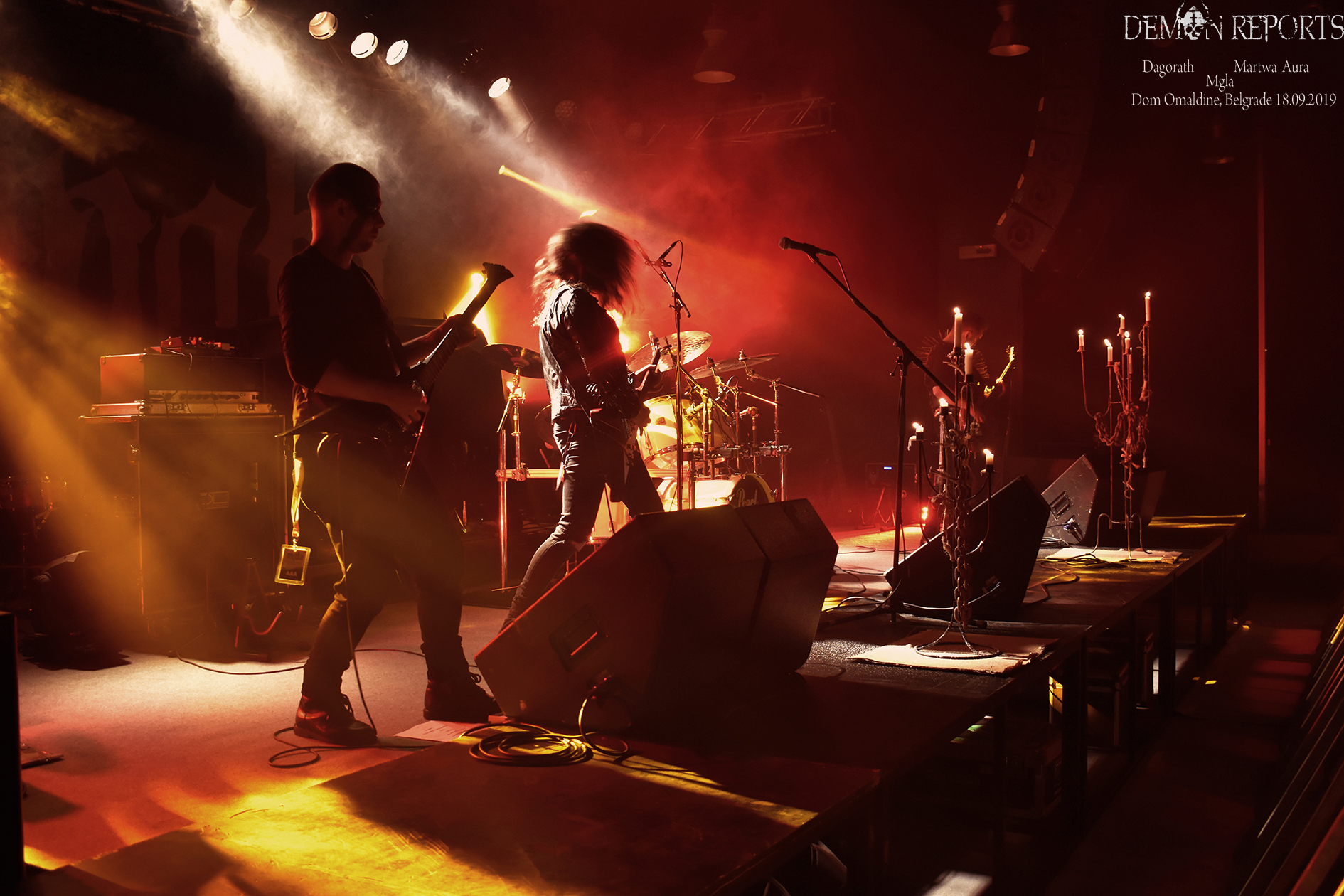 Then, it was time for Dagorath to perform. They were extremely good, with whole black metal attitude and scene, playing some insanely bad-ass black metal, and the audience enjoyed it. This band is for sure, influenced by old school black metal, and the most presented influence is mostly by Norwegian titans Darkthrone, but there is also the influence of the Norwegian gods Mayhem. They totally presented it, with their performance and energy in a true orthodox black metal way. The whole underground sound, was a true dark oasis for the black metal fans, that witness it on their show. They play for the 45 minutes, and the time has come for the other awesome black metal band to perform. 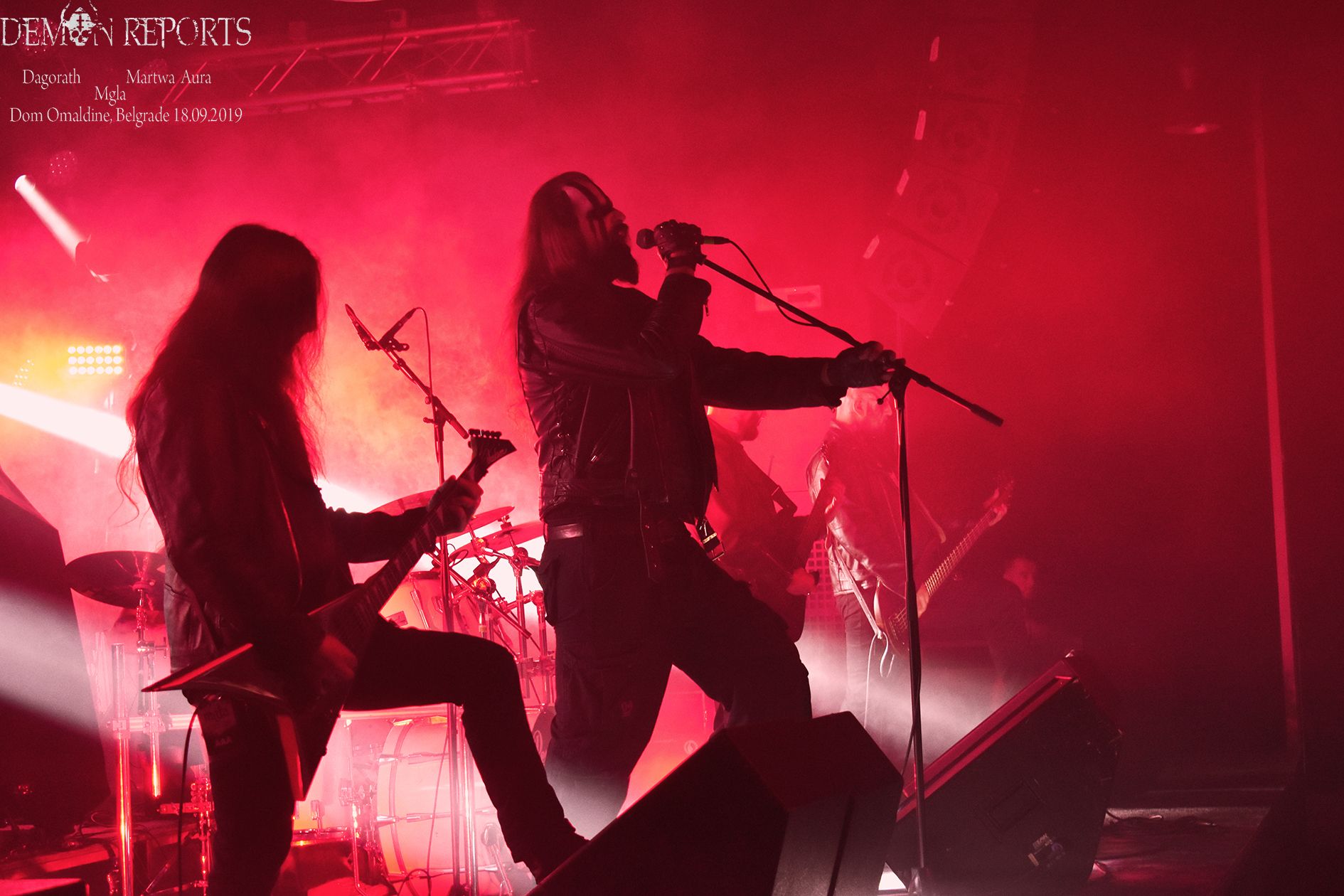 The next band Polish black metal Martwa Aura crushers brought the hell on the Earth at Belgrade in it’s best form. They had also old black metal influence, mainly their influence is between  Norwegian legends  Mayhem and 1349, and even maybe Deathspell Omega.

They have created perfect balance between this influences and their original music that they played, and of course they show it better live, with that attitude, you can just take it or leave it. They dominated the stage with this attitude and their outstanding black metal sound, and the crowd totally got in their mood, enjoyed every note that they played fully. 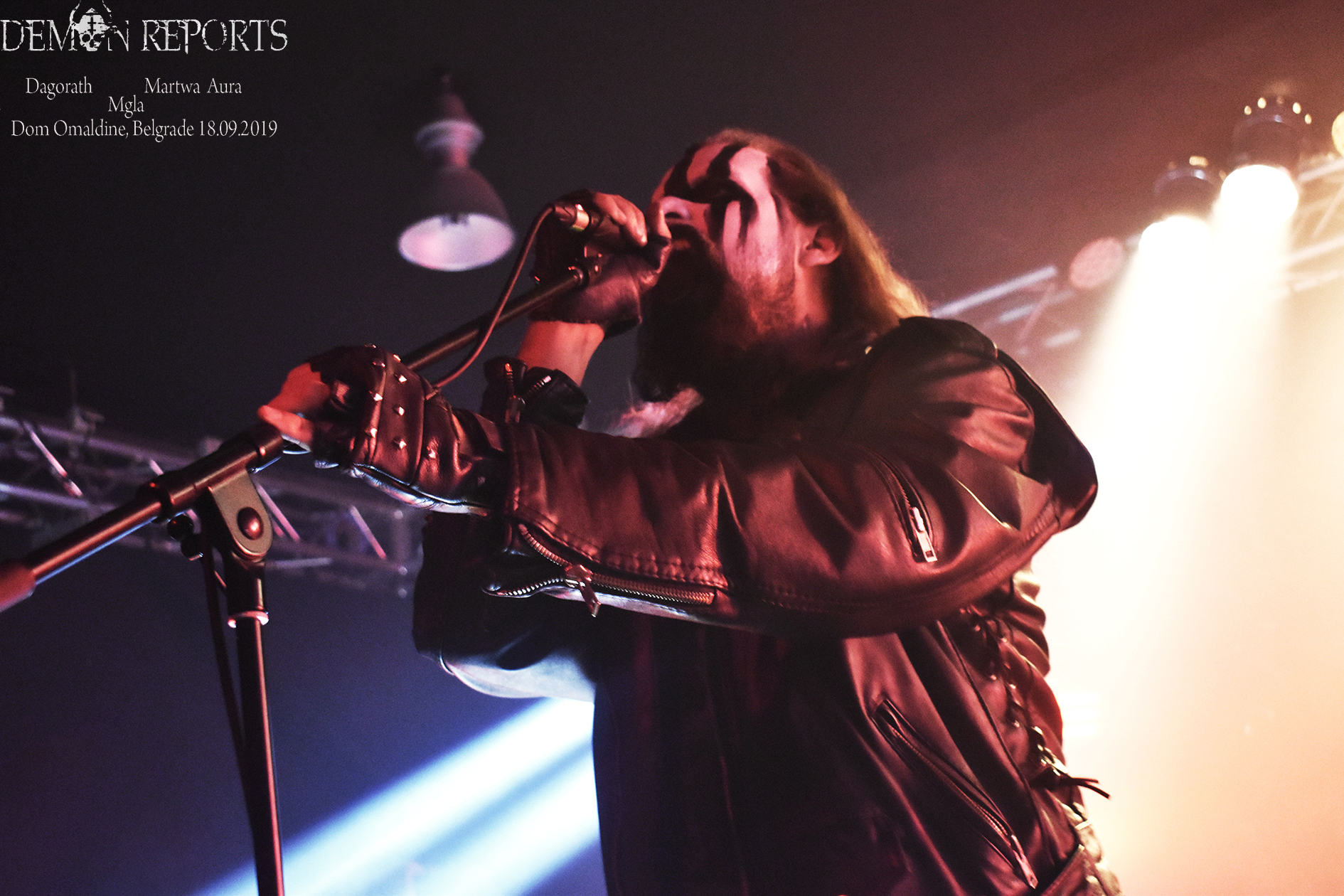 The Vocalist Gregor owned the stage with his clean vocals and scream/growl vocals, and with his appearance as well, the audience looked at him with feat, but respect as well. Tall man that surely got the attention- of the audience . He looks like Gaahl the former vocalist of the Norwegian gods Gorgoroth – they look so alike, so the audience enjoyment the polish Gaahl in every possible way, and of course the crushing devastating black metal from the band, and the band itself, until the end. They are as well static as the headliners of the show Mgla, and are the most closest to the band, with the ideology like Dagorath as well, but closer than the first band, but they did outstanding job entertaining the audience with their presence. The time has come for the band to finish their crushing performance. Next where the stars of the show Mgla, and they made the mayhem that the fans of this band will remember for a long time. 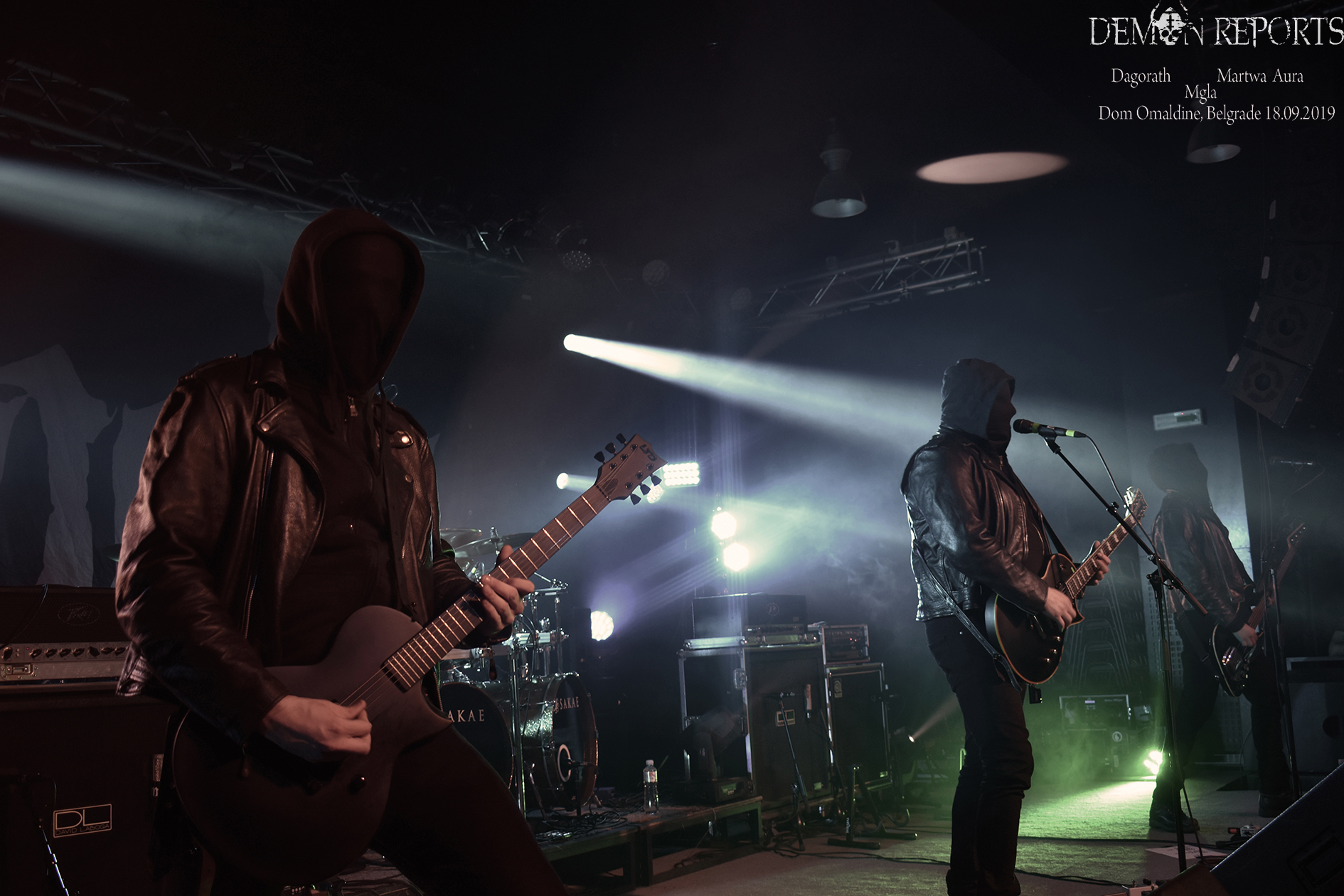 The devils got on the stage, after a while-like a manifestation of the demons them-self’s. Mgla demonstrated technical perfection of the stage, balanced riffs, tones, great sound, melody, vocals- the whole package presenting the true unholy divine music- that has that unique perfection in a true dark art form, like a journey trough deepest parts of the mind, and dark side of it.

They played the songs like “Eif I”, “Eif IV”, and the  ”Age II” and “Age III” which are from their release “Age Of Excuse”, so they promoted their latest album as well. The perfect set-list, and of course perfect formula of balanced music and performance, showed that this band, didn’t need to be active on the stage- they showed the story through their music, a dark one without hope. Reactions of the audience through out the whole show were just ovations, simple as that- they hypnotized the crowd with divine sound, making them listen to the whole show, with the fire in the eyes- they were all in trance. The show remained me of the 90’s black metal concert, so underground, and true to the whole genre. This was a night of the devastating underground music, that left the mark in the brain, as something divine and unique.

The end was near of the show, and then it got even crazier, because they played “With Hearts Towards None VII” and “Exercises in Futility VI” songs, which brought out the best reactions of the audience, the atmosphere got to the point-like almost everything was on fire….

The band dominates the show further, and then got off the stage. Then they got back to play the last song and it was ”Exercises in Futility V”, it got amazing reactions also. Through-out the whole show, black metal spirit was there, the true essence of the black metal, reincarnation of the underground culture and black metal genre, leaving the memory of the night of pure chaos and destruction at a high level.

Mgla is the band, that once again reminds us of the power of black metal, it’s origins-the true essence of it. It was a night of the black metal madness, mixed with some divine atmosphere. Hails to the true black metal, the most wild create of them all.

Live Report: The Noctambulant, Grimaze, Thy Disease, Hate, Vader 20. 09. 2019, Malmö. Plan B!
Live Report: Humanitarian concert for Darko: Night of great music and even better cause!