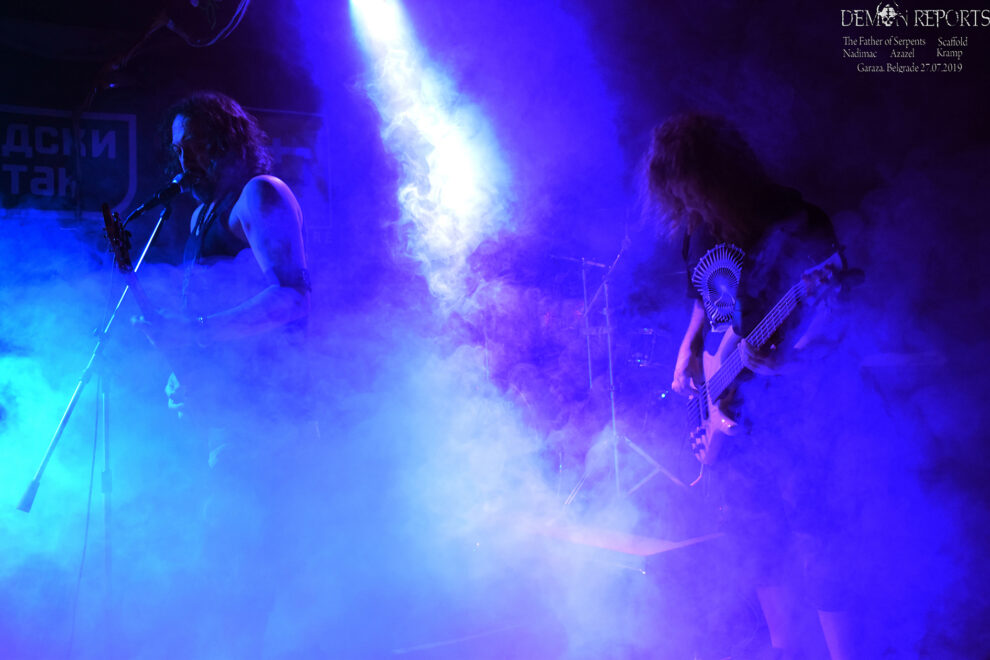 It was hot summer day. June 27, 2019. Standing in the Shadow of mighty Whitesnake, group of enthusiasts decided to organize donor evening for metal brother Darko Kutlačić Drda. Drda is best known as organizer and promoter of metal gigs in the City of Šid, Serbia.

Darko suffers from heart insufficiency and his metal heart works only 20%. As a transplant candidate, Darko was hospitalized long way far from home in April. Unfortunately, Serbian health system does not include medications that are very expensive.

That was one of these days when Bad Boys and Children of the Night were united after all. In front of the club, we could mostly hear one sentence: Good to See You Again! Bands and fans are old friends, so positive, united in pain. 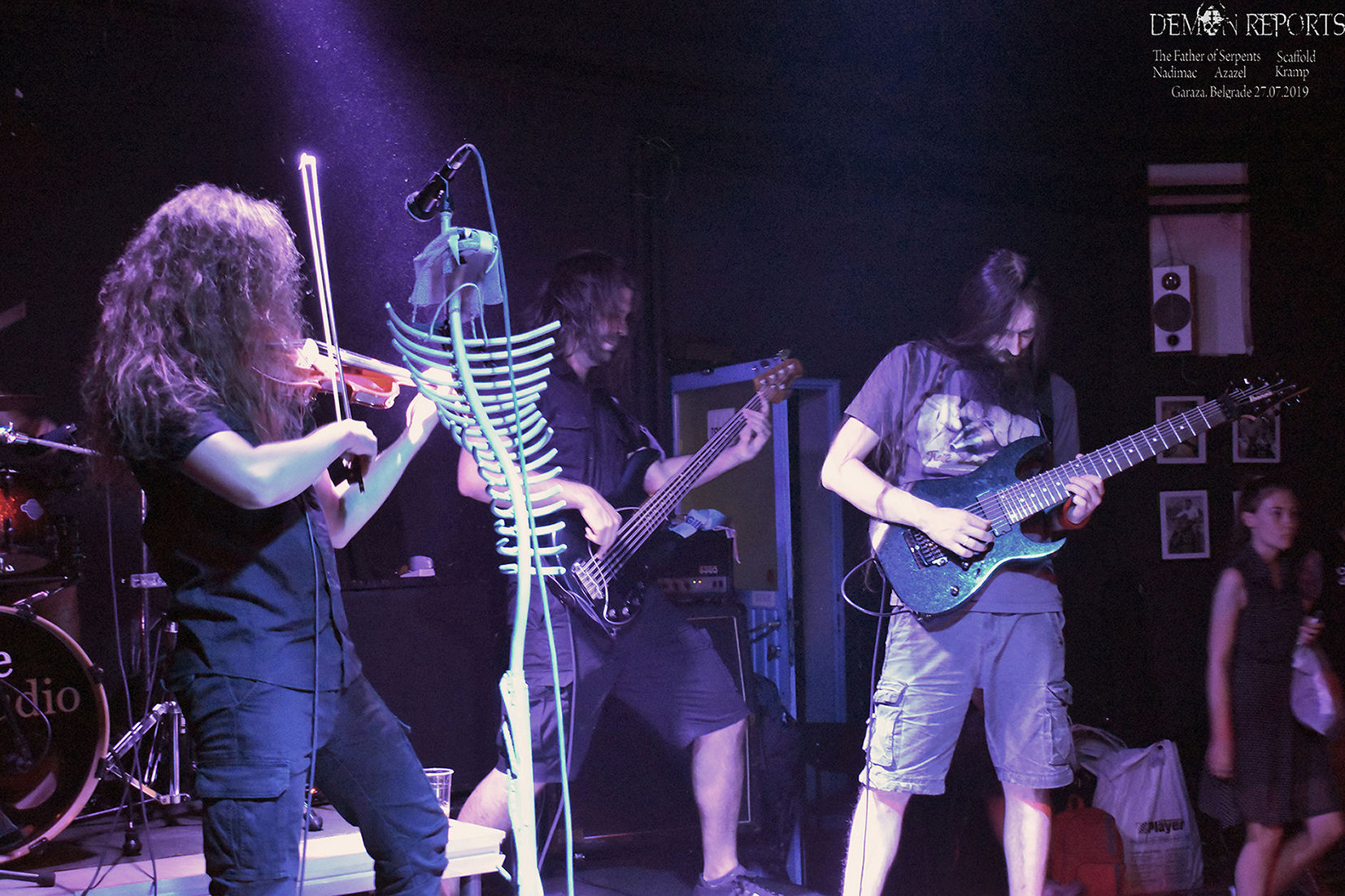 To be honest again, I am not a fan of genre, but guys, highly experienced musicians, obviously influenced by Moonspell and My Dying Bride, hypnotized fans. Atmosphere was at high level, although it was extremely hot, so mostly fans were desperately searching for a fresh air or a beer to recover themselves between the songs. 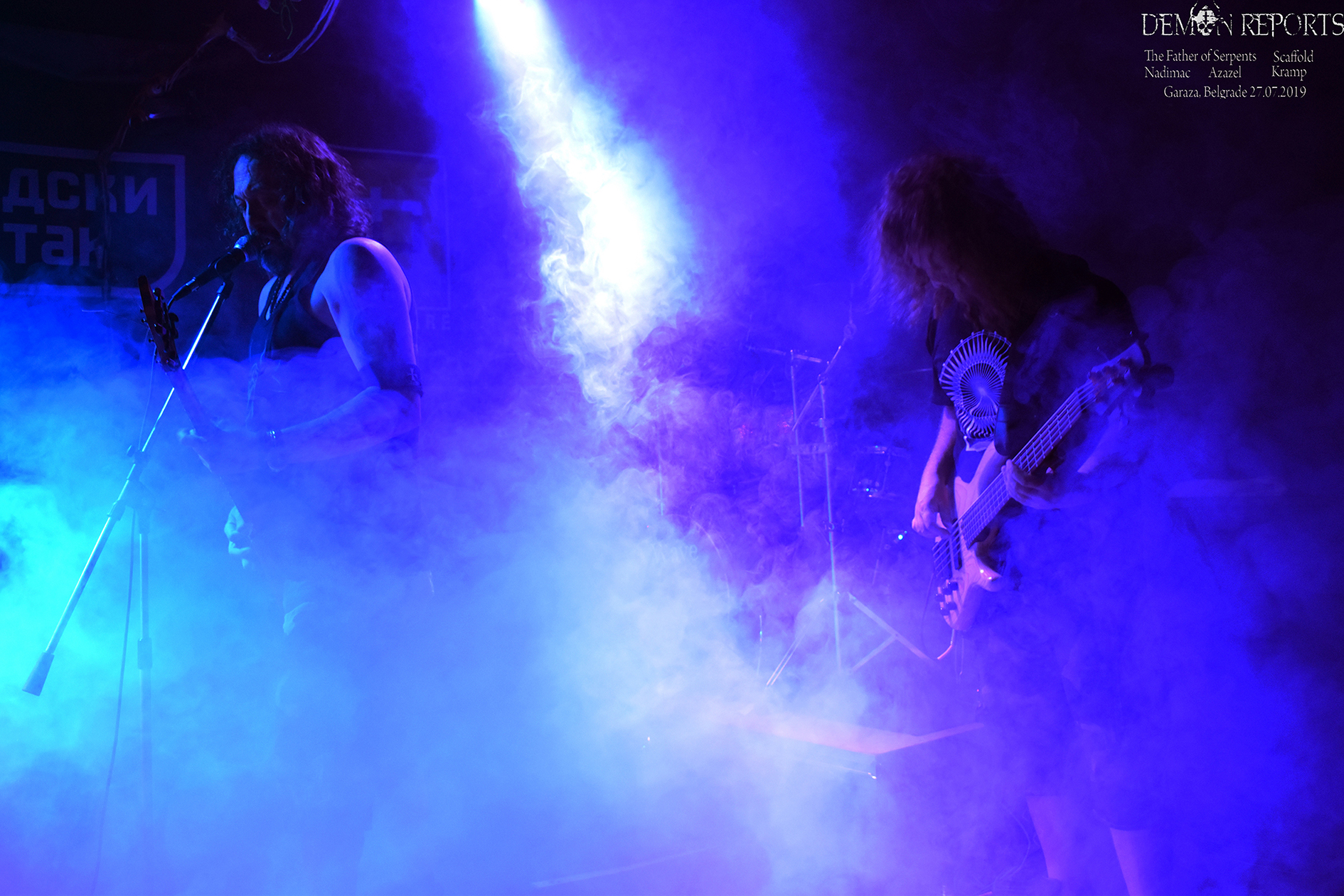 Next one: Scaffold. One of the long lasting (better than write oldest) death metal bands started their set with ”Butcher of Rostov”.The madness continued with ”Die Agression”, ”Wird Introiziert”, ”In the Dawn” of ”Judgement Day”, ”Years of Decadence”, ”Suicidal Future” and ”Five Circles” in a ”Barbed Wire”. Although one of the long lasting bands in Serbia, Scaffold, it seems, have always had a problem with stabile line up, so their high anticipated album ”Codex Gigas”, for now in fragments, can be only heard live.

After the Scaffold, it was about time to catch some fresh air. Summer Rain surprised me as hell. I had to leave venue. Coming Home! Have to prevent flood in apartment that was left with doors and windows wide open. Knowing that my friend Vlada will do his job professional, I am leaving club careless. 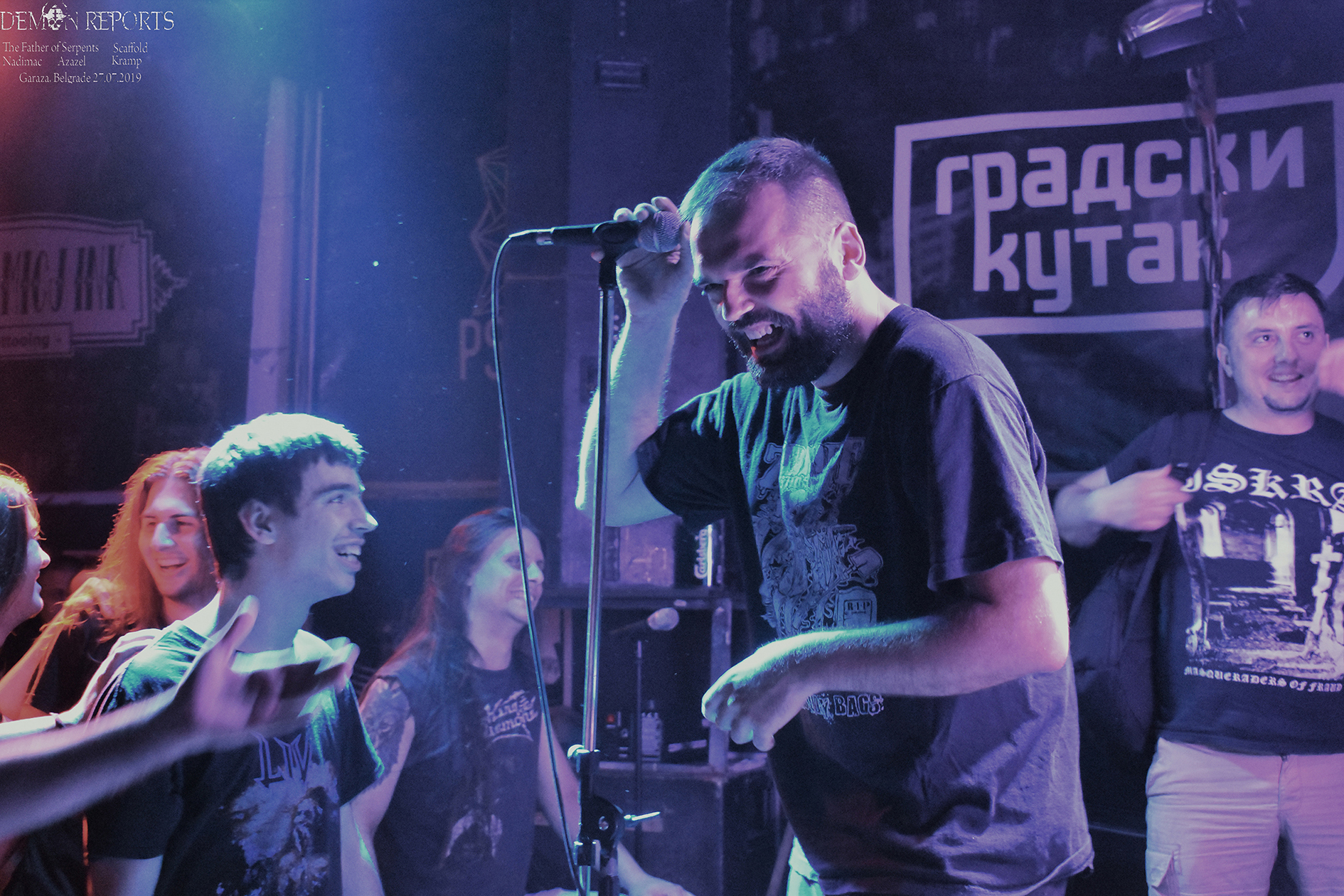 The time has come for the next band to perform, and it was Serbian thrash metal band Azazel. This guys have that kind of performance where everyone around them watch and listen to them without blink of the eye.

I have to point out that their sound was majestic, also they had that crushing energy while performing the songs. Their riffs and vocals tear the souls apart of the audience, which enjoyed their show fully, and bang their heads like there is no tomorrow, while there were mosh-pits and insane ovations to it . It was a show that pumped the blood in the veins with just the sound of their song, for sure. Their sound reminds of Slayer, and the quality of the band is basically on the Slayer’s level. 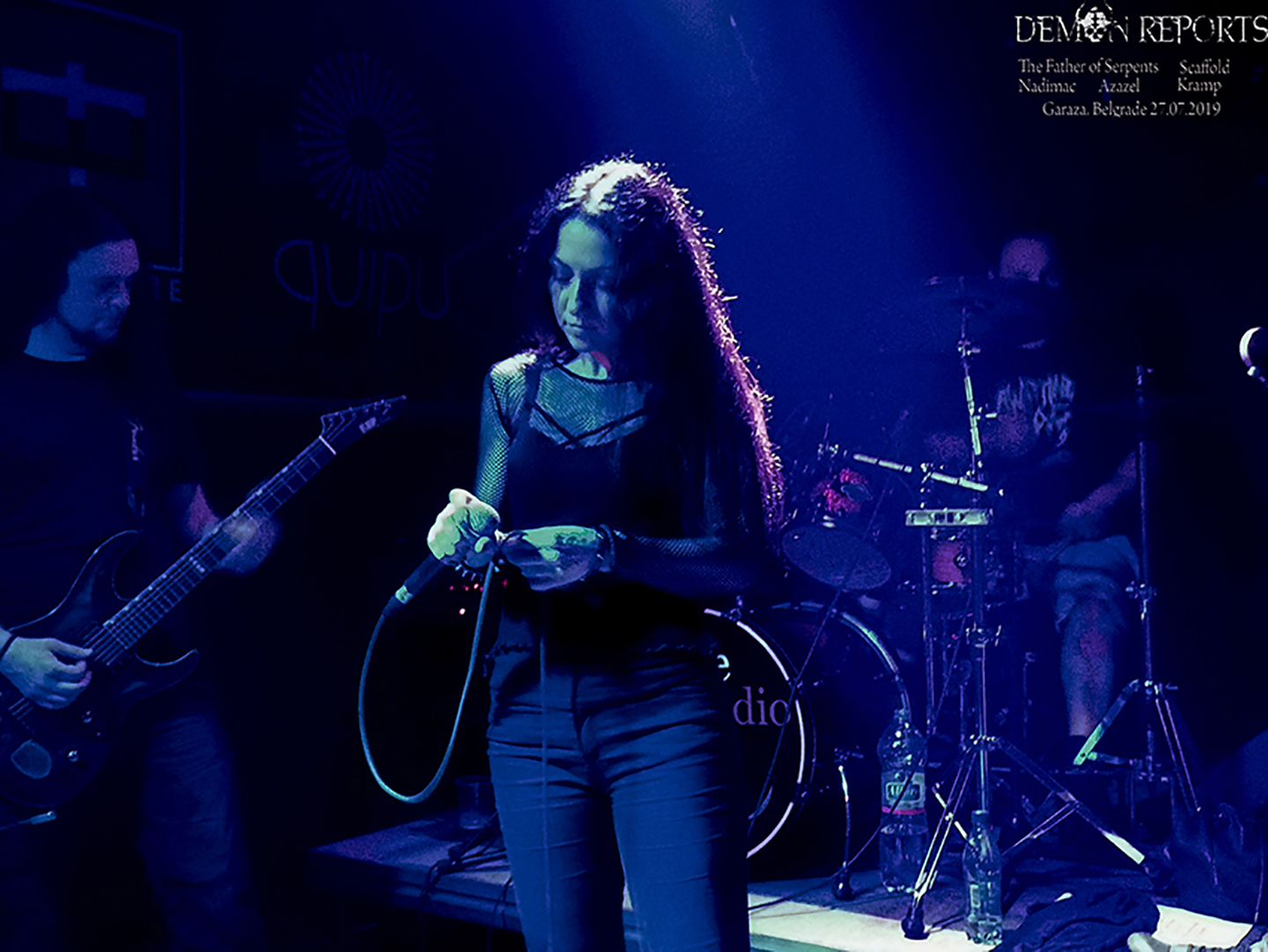 The final band to perform was Serbian death metal bone crushers Kramp. There are no words to say how they dominate the stage as the last band, they had this brutal sound that no one can’t be immune to. Ivana had that superstar vocal, that even the most best female growl vocalists can be jealous of her, brutal, coordinated and balanced. The riffs and sound were so insane, brutal, technically perfect. Kramp sound is based on the old school death metal, and they existed for long on the Serbian metal scene as well, so that is the main reason for their influence. Ivana and the band close the wonderful chapter, showing that good people exist, and that they need to be example for others every day, helping someone who is in trouble.

This show presented that god people still existed , brave metal hearts united for a good cause, supporting one of their own. That kind of thing is rare this days, because club was almost full. Night of positive energy and brutal sounds, made this event something that needs to happen very often, to unite people to do something good and enjoy good music.

It’s was just a night like no other. Darko is proud for sure, that he got all of this support. The main massage is to be kind and do good things, because that makes us all better human beings.