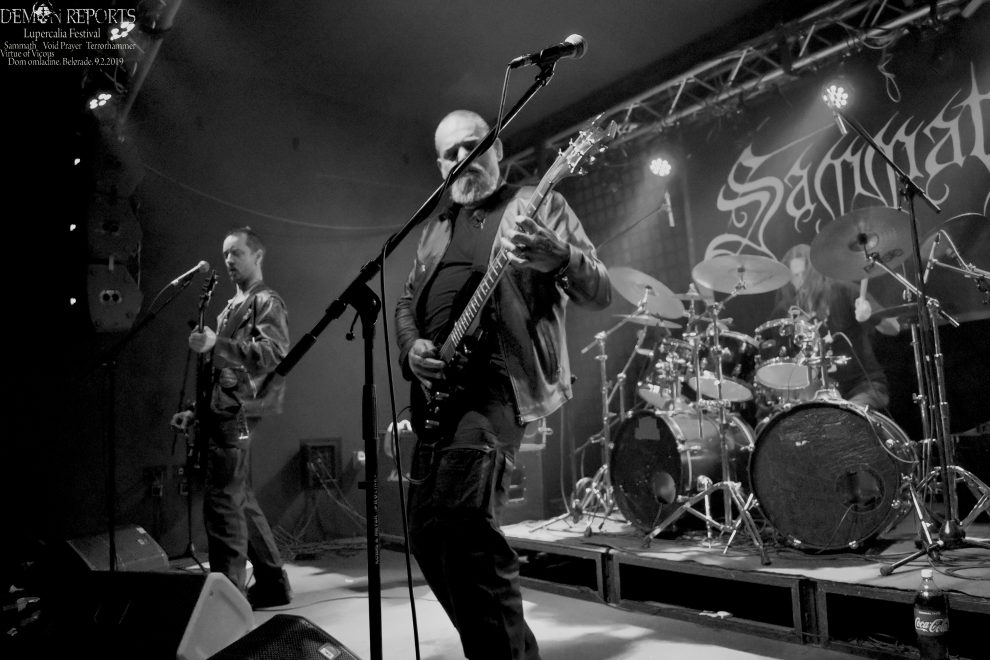 Lupercalia Prima Festival is one of the rare ones, with this type of extreme metal (black, death, thrash metal), that was organized in Belgrade/Serbia on 9th March at Dom Omladine by Jeremija Parkerovic.

This festival is a typical underground festival. Sadly, and I got to point this out, there was a small number of the crowd on the festival, it deserved to be attended by audience in a bigger number. The four bands that played on the festival showed why extreme metal music is such a quality music in many ways, and of course not for everyone, for the few that truly understand it. Main point is that this festival presented very good music and the performances were epic, full with energy on the stage and brutal vibe to it. Bands did their job great, they presented the true vision of extreme metal and that underground pure sound, what black, thrash and death metal is all about.

The first band that performed was Serbian Virtue of the Vicious . My impression about this band was, when I heard them for the first time, and for me the first time, they have great energy in their performance, their music is pure chaos and noise, elements of noise in it gave to their performance a total different perspective, it’s just a great presentation of chaos. Vocalist of the band was all over the place, and so into that chaotic atmosphere and also himself in that mood, giving the audience the show that they needed. Their performance had a pure underground extreme metal vibe, with a attitude take or leave it. So time has up, and the next band will get up on the stage. The band was satisfied with the reaction of the audience and they left the stage, and the next band will make a mayhem on the stage.

Second band that performed on the stage was Bosnian black metal band Void Prayer. This guys were literally insane on the stage, they had true black metal stage act, and the Vocalist handled his role in such a perfect way, after all he added some action to the whole performance, which made their whole show a perfect experience to witness. From the start of their performance till the end, all members were in their own crazy mood, there will candles, of course which are traditional part of the black metal performance, and yeah they played their music with such a fury and passion, this guys were into their performance, and in a great mood. This was one hellish performance, and the Vocalist was totally into his acting, it was just priceless to watch, they ruled and dominated the stage. The show went on, and the next band will speed a lot the things on the festival, I mean literally a lot.

The third band that performed on the festival was Serbian thrash black metal band Terrorhammer. The speed riffs and the whole perfect technical part of the show, made their performance perfect for the audience to go crazy and wild. Each song that they performed had that classical thrash metal vibe fused with rawness of black metal, interesting combination for the live performance, and there were some mosh pits, crowd diving’s while they performed on the stage, and they add that speed energy to the show which is similar to the headliners of the show. They brought the terror and crush the audience with the musical hammer, that they will remember for a while. The final performance made every person in a hall, remember why they love this band, and also way they fell in love with extreme genres, especially with black metal.

Fourth band to play were Ultimate Dutch black metal masters Sammath, and I mean real masters of this genre. They are all about their music, and they presented the full vision of their music in the right form in Belgrade. It was fast, raw, brutal, deadly, just amazing performance, a true black metal show, with some good old school black metal music. For the beginning of the show there was intro “To Hell”, then they played the first song “Stalingrad”, and it was a brutal fast start for the beginning of the show, black metal chaos devouring all. Show continues with a another crushing song “Drakenbloed”, the third one was “Totenhugel”, fourth was “Godless”, this songs are just perfect example of crushing black metal and it’s dominance, the fourth one was “Savagery”, fifth was “Thrive In Arrogance”, six song was “Battletorn”, seventh was “Nineteen Corpses Hang in the Mist”, the eight song was “Ferocious Mortar Fire”, nine one was “Shot in Mass”, the tenth was from the their upcoming release “
Across the Rhine is only death” and the song is called the same way, this song is quite good it’s fast like the older ones that they played on this concert, the last was outro for the end of the show. The crowd was tired but they move them in the right way, and everybody enjoy it fully, a true mastery of black metal, and one of the rare shows with some true essence of pure divine extreme metal.

Lupercalia Prima Festival showed that the extreme metal festivals are extremely important for the promotion of the extreme metal and his survival. This Festival proved why metal as a genre is powerful, and I hope that there will be more festivals like this in Serbia to promote underground culture to the maximum point.

My name is Vladimir Cincović. This magazine was created out of love for music.Support the magazine and blog Demon Reports, We need your support.

Live Report: Prog rock domination in a true melodic power!
Live Report: Viking and Pirate madness brought the fun through a night in a crushing form!