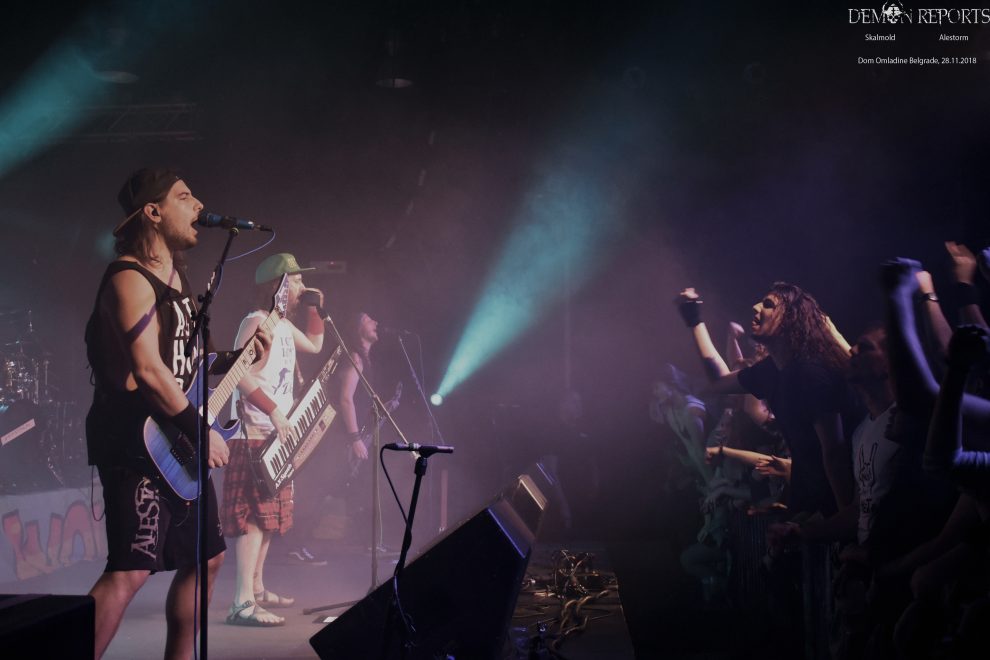 On November 28th Scotish and Icelandic metal giants Skalmold and Alestorm held a concert at Dom Omladine in Belgrade/ Serbia. This show was amazing, positive crazy energy flied through air, the audience and the bands had such a emotional connection between each other,  this was a party, that was an escape from reality in some safe, but positive and crazy world, where drinks and fun are always available, an oasis of pure fun.

The first band was amazing Skalmold Icelandic masters have a unique sound in their music trough viking metal mixed with death metal and the influences of icelandic music and culture.

The crowd was very excited about both bands performances, because this two bands bring the fun and great atmosphere on the whole new level.

The band got on the stage, and the ovations begin, the best reactions where to their older song called “Kvaðning” from their debut “Baldur” .

I can say the band has a very explosive performance live, they are all over the stage, having fun, feeling their music, and what I liked even more is that they want their fans, and the audience to feel that as well trough their performance.

They were so into the show, into making their fans go crazy, each song was a tehnical perfection, they played, also the songs from their latest release “Sorgir”, and the crowd reacted amazing to them, except they didn’t sing the songs fully, because they didn’t know the language, and some known the language, but they singed after all, so the point is that the band had a performance, where they hypnotized audience and fans, with their music not just words, it was something special, and with their beautiful melodies, atmospheric keyboard, back vocals and vocal changes on the stage, all of it made the show just magical, in a true viking spirit, they greeted the fans in Belgrade/Serbia as well.

The show went on, the atmosphere was heated up, and the band got off the stage at some point of the show.

The time has come for the crazy Pirates Alestorm to perform. Vocalist Christopher had a unusual wardrobe on the stage with the sandals and the cap on his head and the t-shirt with the slogan “I Got Lost in the Gay Dolphin”, so this can only mean, that the show is going to be fun and crazy as ever, they said many times ”Fuck You” in their performance which the audience liked the most, because Serbs swear a lot.

There was a giant yellow duck on the show, which made the show more interesting and even weird, but it looked great on the stage with the whole atmosphere and everything. They played the songs like “Keelhauled” i “Alestorm”, and the audience reacted to the second one, because the band shot the music video in Belgrade/Serbia.

They performed  the song “Hangover” which is a cover song from the pop singer called Taio Cruz, and the audience reacted very well to this song, they were screaming, dancing, crowd diving, totally insane in a positive way at that point, this cover is way better than the original, it has a true party spirit to it, with of course some metal domination to it.

Christopher  had a funny interaction with audience saying to them: “Do you like Beer”, and the fans reacted with “Yes”, he continues: Do you like to push pizza in your ass”, and the crowd reacted also to this with laughter and enjoyment, he said: “I knew it”, they really know how to entertain their fans, and to enjoy it as well, with some humor and amazing atmosphere, that is a trademark of the band. The next songs that they performed were “1741 (The Battle Of Cartagena)”, “Mexico” and
”Nancy the Tavern Wench”.

They were mosh pits, headbanging, crowd diving, death wall, every soul on the concert was in paradise, having time of their life, so the show went on and it was the time for the band to get of the stage, of course the Vocalist Christopher said once again something to the audience and it was: “You stink very bad”, and the audience was smiling about the comment.

The show went on and the best interaction with the had the Guitarist
Mate Bodor who had such a great time on the stage that he even, almost went with his guitar to the audience, but it was such a great moment, to see the true love of fans, and the happiness of the Guitarist on his face about it, it was priceless. The time has come for the band to leave the stage, and they went of the stage, satisfied with the whole show.

These bands are unique, their music is a inspiration to all of their fans. This show presented the fun side of music, and why we all love music in general, and the true point of it, to have fun, to enjoy being you in moment in something that you like, that drives you to be a better person. Viking and Pirate fusion for the bands, showed the true spirit of rock and metal, it was a mix of powerful and positive vibes, they did it at the show, each band on it’s own way together making a music a thing about the heritage and fun, which is the point of the music itself. This was a show that change a perception of things from the ordinary things, it was portal to a full enjoyment, making a one ordinary day unusual and divine.

My name is Vladimir Cincović. This magazine was created out of love for music.Support the magazine and blog Demon Reports, We need your support.

Live Report: Lupercalia Prima Festival, a night of chaos at it’s full speed!
Live Report: St. Patrick meets Halloween, night of the full joy on the Holiday of the horrors!