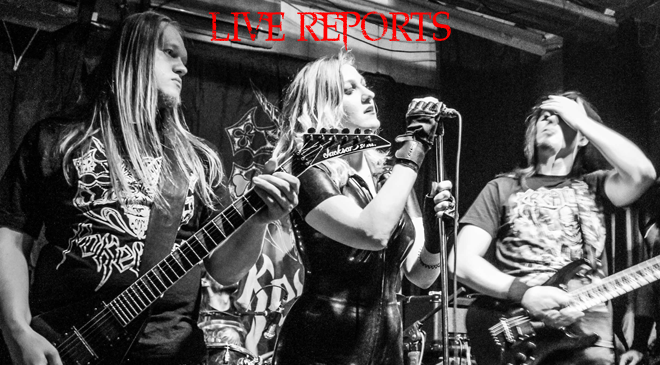 At Belgrade, there was held a festival called METAL FEST, held in Belgrade in club Vrtoglavica. There were five bands on this festival, and two of them were Wol’f Hunger and Pokerface. Approuching the club Vrtoglavica, there were people outside the club, waiting to get in the club, for the show to begane.

The bands delayed performances about for a half an hour. The people entered the club, and the first Serbain psychedelic stoner doom metal  band Madvro started playing in the almost empty club. The band played fiarce and loud.

The crowd supported them like they were a very famous band, and also they had a special guest, that played in one of the songs mouth organ, that was fitted awesome with the song.

The second band to play was Serbian thrash black metal band Wol’f Hunger, the club was almost full. The band’s was brutal, loud, in a very rage mood, that lift up the atmosphere in the club. band had a special guest Predrag Milovanovic, who perfomed a punk song with this band, a the song was very addictive.There were most pits,headbanging,screaming and the public gave the full support to the band, as they desirve it.

The next band was Russian thrash metal band Pokerface the stars of the night, they entered the club, and the show begane, the public in the full club went wild, there were ovations, most pit’s, headbanging, complete chaos. The female singer Alexandra Orlova was in a great mood, and also at the begging of the show she said: We are a band from Moscow, we are glad to be here in Serbia Belgrade. Alexandra Orlova the singer of the band, lift up the atmosphere to the most highest point, she was headbanging, dancing, screaming, all over the place, the whole time, and the whole band was in extreme amazing mood.She was cheering the audience, to go crazy with her and the band. The band was fiarce, loud, powerful and very incredible.

The next band that is going to play was Serbian thrash groove progressive metal CounterIgnitioN. They played were loud, powerful, they were great. The public supported them in the best way, in small numbers. The last band was Serbian Wartburg Rock ‘n’ Roll band Upitaj Prah, they music is interesting, and it was interesting to listen to them, they were different from other bands in the festival. This Festival was great, even with the small crowd, the festival was metal to the core. The bands were awesome, the club atmosphere was great. The stars of the night thrash metal Russians are the true thrash metal band, there music is the sweet punch to the face. Ultimate thrash metal band that proved with this concert way they are so unigue and special in thrash metal genre. METAL FEST is one of those festival, that has a cool relaxing vibe to it. Great atmosphere and festival,in the most best way.

Female metal power
The power of symphonic and folk sounds