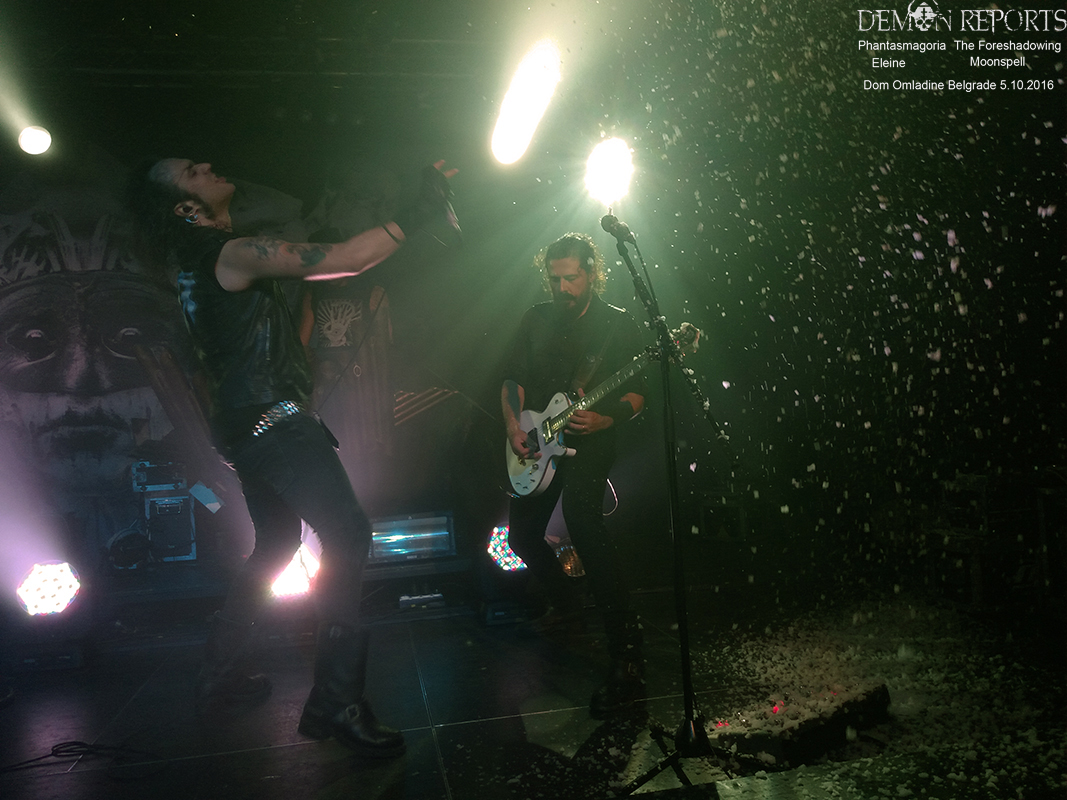 The night of gothic darkness

In Belgrade at Dom Omladine , Legendary Portuguese gothic metal band Moonspell held the concert. I would like to say for the start, that Moonspell, brough the darkness to the audience on the hole new level.

The first support act was Phantasmagoria Croatian gothic rock/metal band. The crowd was in few numbers in the big hall “Americana”. They were guite good, the crowd supported them for each song, sound was good, the songs were interesting. The singer stated about the band, and he said this to the crowd, as a joke: “You can now give as the money for the gasoline, for us to go back home”, the crowd was laughing of course. The band played each song with the passion, and you can feel that this songs, were played with some emotions. The band gets off the stage, and the show goes on.

The second support act are Eleine Swedish gothic metal band, that brings a lot of attention to themeslef’s, as well as the female singer is a belly dances also. The band welcomed the audience, and said that they want selfies with the crowd. The show began, the crowd was screaming, headbanging, and they were hypnotized by the beauty of the female singer. The guitarist and the second support vocal of the band ask the audience to sing with them, i had an interesting announcement with a half singing for every song. The band had not much time to play the show, so they with the smile on the faces said goodbye to the audience, and the audience said goodbye, in the same way with smile on thier faces.

The third support act was The Foreshadowing Italian doom gothic metal band. The bands got on the stage with some dark energy, preparing the audience for devastation.As the crushing doom atmosphere covers the hall, the crowd was in silent mood, the music of the band, put the crowd in some depressive mood, but they enjoy it, there were ovations, screaming and headbanging. The time was up for the band, and soon the stars on the night were about to get on the stage. The band got of the stage, the fans of th band were happy, the other were just waiting for Moonspell.

As the darkness devoured the hall, the spooky sound of impatience eating alive the fans, and then the Gothic grandfathers entered the stage. The ovations, the screaming were more than loud, the fans were in trance. With every song that band played there were reactions, girls have that sparkle in thier eyes, the males were happy from the out side, some males even cry on the concert, very interesting. The singer of Moonspell perfomed with singer of Eleine their song “Scorpion Flower”, they were amazing together, great voices, and amazing song, the emotions on the high level in the audience. The band played thier most famous songs, the show goes on, and band left the stage, and the fans were calling for them, and they returned for the bis, and played three more songs, and that was it for the show. I can say that Moonspell brought some dakrness to the concert, in a true gothic style. They prove that they are the best in this genre, the concert was amazing, crowd was great, gothic darkness, with some real metal power to it.