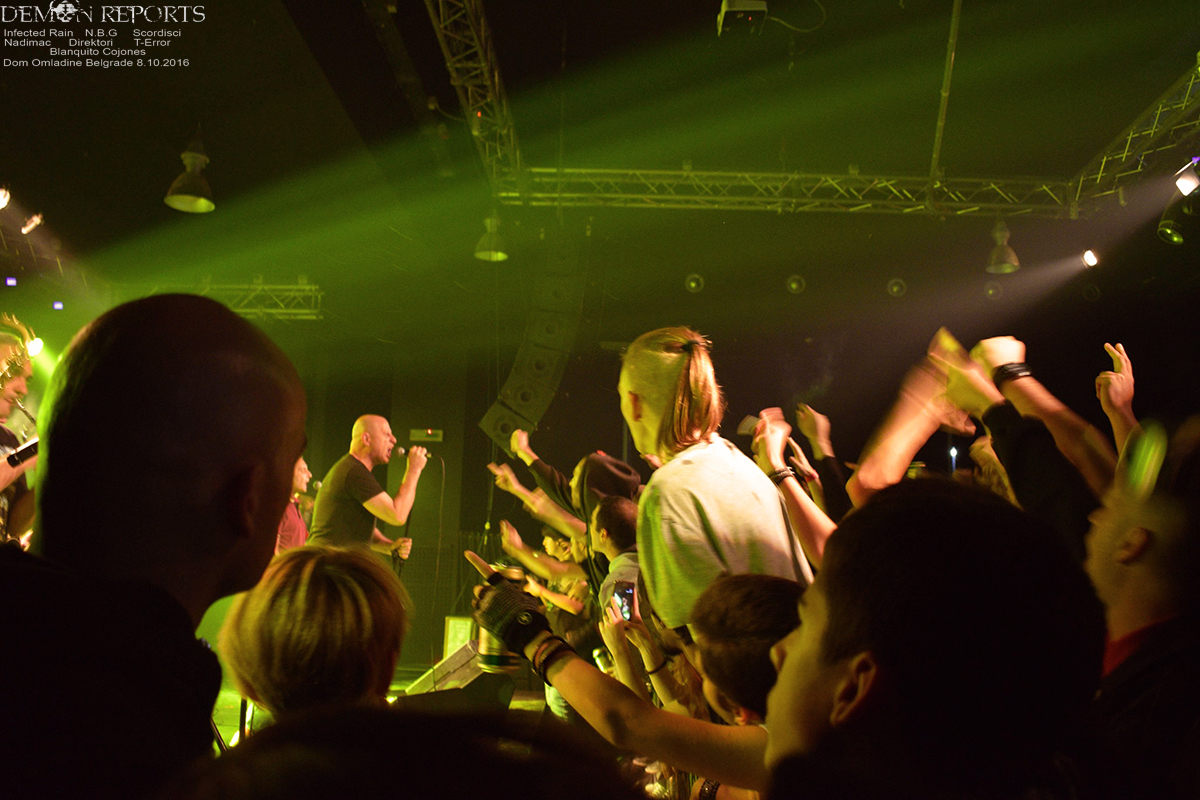 Night of the punk and metal alliance

The second Belgrade Riot fest began with some very interesting and awesome bands. In a Dom Omaladine at big hall Americana, punk and metal were united together, to take over the world.

First band to perform was Infected Rain Moldavian nu metal band. The crowd was there in few numbers, they were mosh pits, headbanging, ovations for the band, like the hall was complete full, but it was not. The singer Lena of the band, has a powerful influence on the public, and has that crazy energy, that keept crowd sreaming for more.The said that they are glad to be in Serbia, also in Belgrade of course, the singer asked the crowd how to say thank you in the Serbian language, it was funny how everyone responed at the same time on that question. So the Lena said thank you on the Serbian language. The band played on, and they went off the stage, they were sad because they didn’t have time to play more, but the crowd was very satisfied.

Second band to play Scordisci  Serbian Celtic punk band, brought the joyfulness to the crowd, everyone was singing, dancing the irish dance, there were mosh pits also. The band was great, they played fierce with the true punk attitude, but with the spirit of celtic roots, there was magic in the air. The band played on, and they left the stage, in a good mood with smile on thier faces.

Third band to play was Nadimac Serbian thrash metal band. They thrashed the stage out. They were fierce, loud, fast, brutal. The crowd was headbanging, there were mosh pits. The singer was all over the place, he had that energy, to keep on jumping, screaming all the time, and to entertain the crowd. Trash metal power in thrash metal style. The band get off the stage, leaving the metaheads satisfied.

Fourth band to play was Serbian punk rock band N.B.G. . They entered the stage and there were ovations and screaming right from the start. The band showed, that they are old punkers, with the old school punk attitude. They were all over the stage, the crowd was hypnotized, and the hall was full of people. They celebrated on the festival the 32 years of career, the show was amazing. Band kept playing on, and they left the fans and crowd very happy.

Fifth band were the stars of the Serbian punk band Direktori, that crowd was waiting for.They were ovations, crowd fall in trance, it was madness. The band itselfs, looked like they are going to create a insane party, which they did. With every song, the fans and the crowd were singing like it was as a anthem, and even some fans and other members of the bands were on the stage dancing and screaming with them. The band kept playing on, and it was time for them to left the stage, but they have return for a encore, and the fans went crazy, and finally they left the stage, and the fans and crowd did not know  what hit them, they were beyond happy and of course they wanted more.

Six band to play was Serbian hardcore band T-Error, the big crowd left the festival, after the show of the Direktori. So the smaller crowd stayed to support the band, and they did support them very good, they were headbanging, screaming with the band. Their show was quite good, they satisfied the crowd. They left the stage, and the show goes on, crowd was tired, but satisfied.

Seventh band was Serbian punk band Blanquito Cojones. The band are the true stand up comedians, they had there speach at the beginning of their concert, and after that the show begin, the fans and friends of the band, were happy, and it was a intimate atmosphere, cool sound, and more cooler attitude of the band, in the punk style. The band played on, and they left the tired fans and friends, to go in one piece to their homes.

Belgrade Riot Fest is one of those festival that brings fun, pure fun. This festival brought pure enjoyment to the fans of punk and metal. This was a very special night, with punk and metal power, united to make a change, to show the true side of rebellion.

Slavic madness at it’s best
The night of gothic darkness