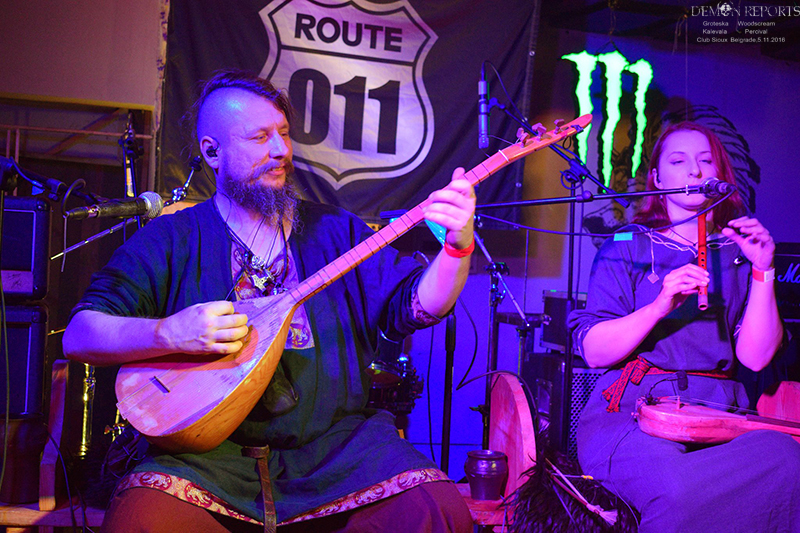 At Belgrade in Serbian in Club Sioux, Hrast Festival was held. The most amazing slavic pagan metal bands played on the festival. Celebration of Slovenian culture and tradition was the most important think on the festival.While approuching the club the bands were arriving, but the crowd wasn’t still there, so the bigger crowd was there at the beginning of the first band.

The first band to play was Serbian melodic gothic metal band Groteska. They statrted playing slow, and then some of the songs were faster, the atmosphere was great, the sound of the band was not to good, but they transfer the emotions to the crowd. The vocal was good a emotinal and also then with growls, which is a great combination from soft to hard. Crowd was enjoying there show, there were singing with them, but they didn’t gave the full support to the band. They got of the stage, and the show goes on.

Second band to play was Russian folk metal band Woodscream. There were ovations right from the start. The band said:”We are glad to be in Belgrade” and the show goes on. The sounds of folk music and metal were crusing the walls in the club, the beautiful vocal of Valentina the singer of the band was amazing also the growl of the guitarist too there were like beauty and beast together, the crowd was in trance. There were also mosh pits, headbanging, crowd diving, the crowd had an awesome time during thier concert.The band gets off the stage and the crowd was satisfied,with the smile on their faces.

Third band to play was Kalevala also a Russian folk metal band. Kalevala entered the stage, the crowd went crazy and then there were massive ovations. The interesting think about this band, is that thier music has that raw metal power, with some really great folk music. Thier show on the festival brought out the most reactions. There were ovations, screaming, headbanging, crowd diving, mosh pits. With each songs, the crowd was crazier and more crazier, as the time went on. With the specific vocals by lead singer Ksenija, the atmosphere was amazing. The band rocked the club, they brought out trought there music a true meaning of Slavic pagan tradition, with every song, the spirit of Slavs was there. The band left the stage, the fans were paralyzed with happiness.

The fourth band to play was Polish Slavic pagan band Percival. Besides other metal bands that played on the festival, Percival is different, they played a show with traditional slavic pagan music. With the awesome traditional pagan costumes, and the music, the audience was hypnotized by thier music, there were singing with them, it was peacefully, with some true pagan energy, that was in the air all of the time.They were singing one song that was about Kosovo, the audience reacted to it in a very positive way, as time went on, the band played the last songs, and they left the stage. The audience was tired, but they were very happy with the Percival and the hole festival.

Hrast Festvial is one of those festival, that is one of the most amazing, yet interesting festival that brought out the Slavic tradition and culture trought music in the best possible way. So Hrast Festival is going to get bigger and better  in the name of the gods. Slava.