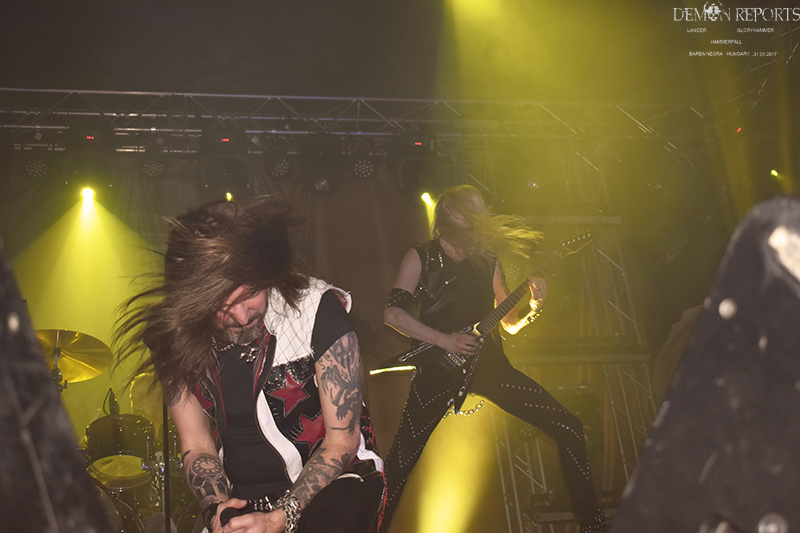 Hammefall held a concert in Hungary at Barba Negra club. I can say about the show, that it was something special, fans enjoyed the show, and the band demonstrated, why their are one of the best metal bands out there. The show was amazing, band had a amazing time during the show. Club was already full of people, waiting for their bands to start.

The first support act was Swedish heavy metal band Lancer. This band has that true heavy metal vibe to their music, which they presented also live on the show. Fans loved it from the start to the end, they were screaming, headbanging, supporting the band in the right way. Vocalist Isak was all over the place, with insane positive energy to it, fans enjoyed it in every way.

At some moment during their show he brought out the head of Medusa, and play with it in very interesting way. That head of Medusa is mascot from their latest album ”Mastery”, also they played the songs from this album. As the time passed, it’s was the time for the band to leave the stage, and the fans were very satisfied.

The second support act was Scotish power symphonic metal band Gloryhammer. This crazy guys, lift the atmosphere on their concert to the roof. There was a introduction at the begining of thier show, it was a story about their latest relase ”Space 1992: Rise of the Chaos Wizards”. There was a magic in the air, the fans were hypnotized by the band, they were having a time of thier life.

Troll entered the scene with a big hammer, which later  singer Thomas or the Green Lantern, took it from the Troll, and left him to cry in his agony. Fans went crazy after each song ,they were screaming, headbanging, total chaos was unleashed. This band has this amazing costumes, that are comic characters, on the show, they were like superheroes, saving a souls of the metalheads. So the show went on, the fans were in trance, they wanted more, but it was time for the stars of the night to entered the stage.

Finnaly, the mighty Swedish power heavy metal legends Hammerfall entered the stage, there were ovations, screaming, fans falling in completly trance. The best reaction were to the two songs ”Riders of the storm” and ‘‘Let the Hammer Fall”, which the audience was screaming the words out loud. Band was in the great mood, fans of the band were so happy to see them, that they bright gleam in their eyes.

Singer Joacim in one moment on the concert said: ”Are you ready for real heavy metal”, and later added this also: ”I can see there are more women here then man on our show interesting”. Hammerfall continued with such a furry, and power, it seems that the power of the hammer served them well on the concert. Then he asked: Are there any newcomers here, and the almost hole club, raised there hands, as a yes to a question, he was very suprised, but in the positive way. The show goes on, the fans were got insane, and them the time has come for the Hammerfall to leave the stage, so they did it, but the fans wanted more screaming their name, and they gone back to the stage for the last time, and this was it. The fans were more than happy, tired, with smiles on their faces.

Hammerfall showed that, why they are who they are today. Amazing show, with some other amazing bands, heavy metal power, at it’s best. Trough the mighty power of hammer, no one was able to resist. Hammer has fallen, leaving his mark, on the place were it has fallen.

Here are some video clips from the concert, enjoy: