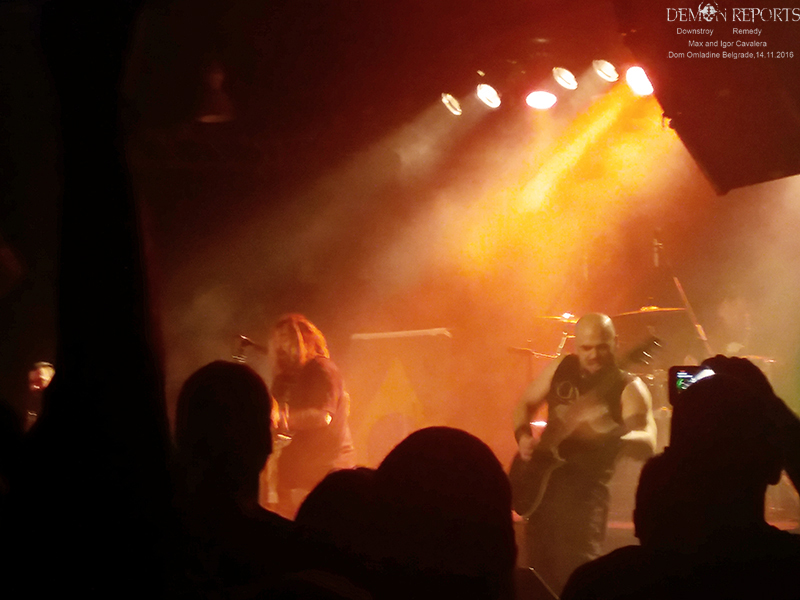 So Cavalera brothers Max and Igor Cavalera a members of Legendary Brazilian metal band Sepultura held a concert at “Dom Omladine” in Serbia at big hall “Americana”.I can say that the concert was more than amazing, they brought there special vibe and energy that Sepultura had a long time ago, it’s not the same, but almost the same.

The first support act to play was Serbian Downstroy hardcore groove band. The guys were really good, the sound was, the singer was all over the place full of energy, the crowd reacted to the band very well, there were ovations, screaming, headbanging.The think about this band I like the most is that energy, they totally has that positive spirit in their perfomance. Afer same time the band left the stage, the crowd was very satisfied.

The second support act was Serbian metal band Remedy and this is there first gig ever as a band. This band brought some interesting to their show and unigue. It something like reggae and metal together, the crowd was hypnotized by the sound of the band,the lead singer Kojot had some very amazing energy that he brought to the audience. The sound was good, there were headbanging, screaming, the crowd was totally in the good mood. Sadly the band left the stage and left the crowd and thier fans confused and happy.

So the moment has come for the legendary brothers from Sepultura to play. The few minutes of waiting were in progress, and them the massive ovations were heard in the hall. The band is going to play a full legendary masterpiace “Roots” from Sepultura, so the show started. Max welcomed the audience, and said many times “Go fucking crazy, I would like to see some circle pits”. There were screaming, ovations, headbanging, mosh pits, circle pits, the crowd was really having a awesome time.With every song from the famous record, fans were in trance, there was a jungle atmosphere at the stage and beetween the crowd also. There were also playing a “Ace of Spades” of the Legendary godfathers Motorhead, the crowd went crazy on this live cover.So the band left the stage, the fans and the crowd were calling them, they return for the encore. The shows goes on, the madness was still there, but the madness had to stop in some point. The band goes of the stage at the fans and crowd didn’t know what hit them.

This concert was one of the most interesting and entertaining concert’s. Return to the Roots with Max and Igor in some badass junge style.