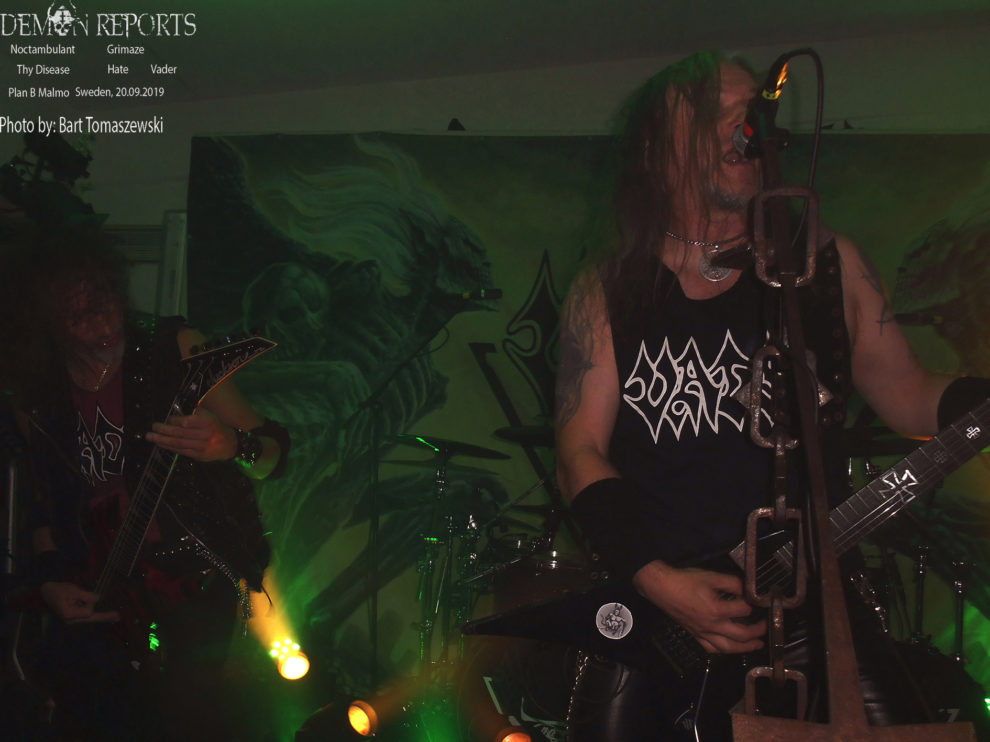 I was waiting this gig since I got to know about it in June or so. Well, the worst was the time after Malmö Massacre Festival, coz any gig took place then and that’s why time went so slowly – every single day supposed to take almost eternity.

I wait entire gig and count days until this, but here it was about Vader, the band I have some very warm feelings for and sentiment to.

The main reason isn’t they’re coming from Poland or even not that they were the first Polish band who signed with really huge worldwide label. This is first of all about how they played on the very first show I was on. It was yet under the communism in my hometown . Anyways, finally this long awaiting Friday has come!

It already became a tradition I’m taking few hours before the gig my friend from train station, we grab some beers and so on. I’ll maybe don’t describe it all in details. The most important is that we were on the place even earlier then a concert should began. Unfortunately it didn’t help in any way to me. I mean, I somehow forgot to take camera with me, what I noticed when wanted to take the first this evening pic. 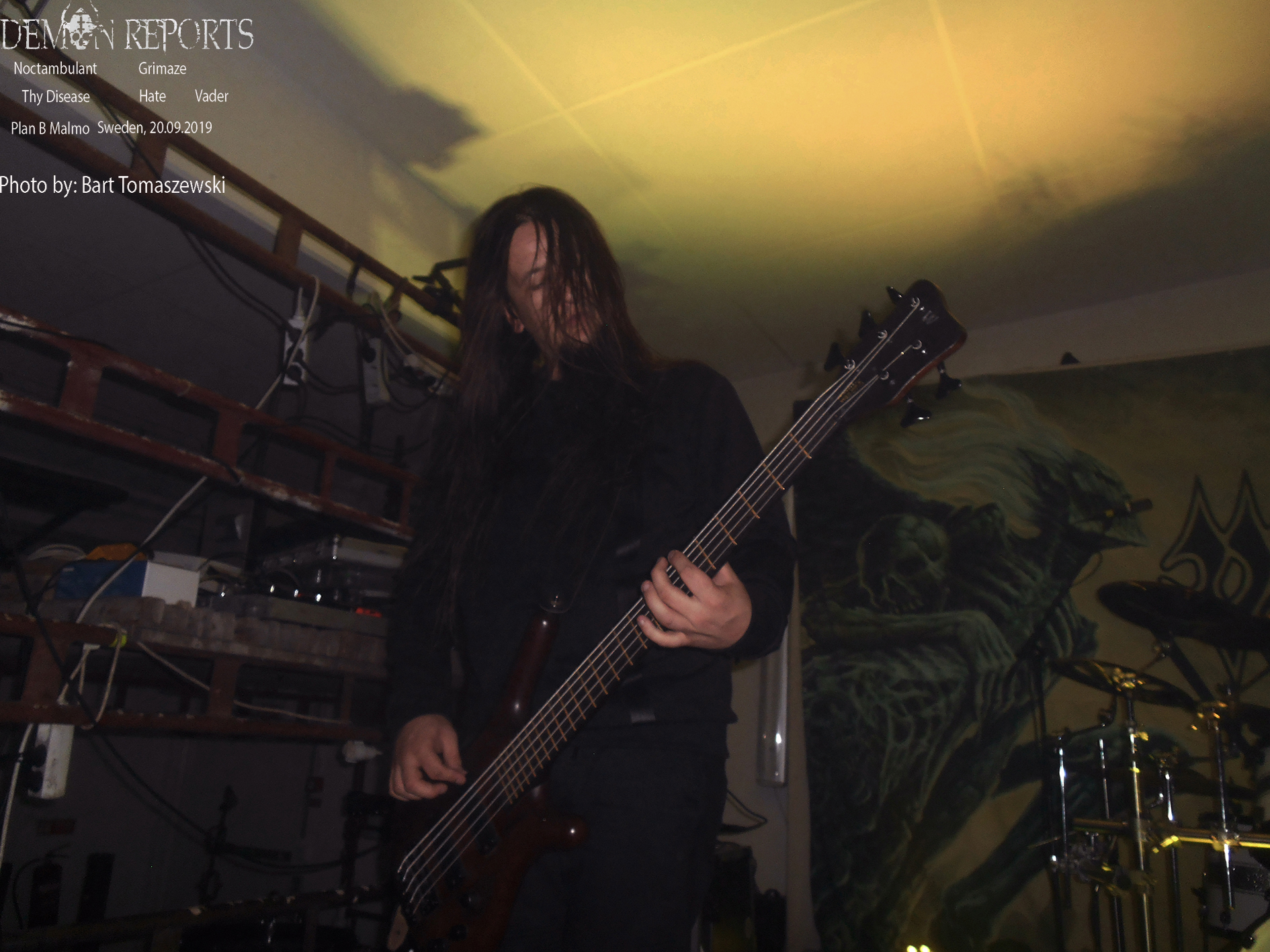 Fortunately I live very near to the club and I could correct this mistake. But since you always have to pay price for your mistakes, I lost the most of show of band opening the evening – American The Noctambulant. That’s why I can’t write s lot about them.

Well, I reviewed their debut full-length and I really the music. So when I heard they’re play with Vader, I was very interested how they sound live. Instead I was running home and when I came back they disappeared from the stage.

Buddies told me show was fine and had right Black Metal climate. Here I wanna thank Jimmy who gave me some pics of them! Then came some break of course and stage entered Bulgarian Grimaze .

I didn’t know them before and tell you what. Their music sounds much more Death Metal life then on releases.

You know, somehow you don’t notice a little twisted Melina’s guitar on the gig. The same is about Pavel’s vocal. Stage working of all musicians was on good level and they were living as well what, I guess, caused that under the stage some movement has began. 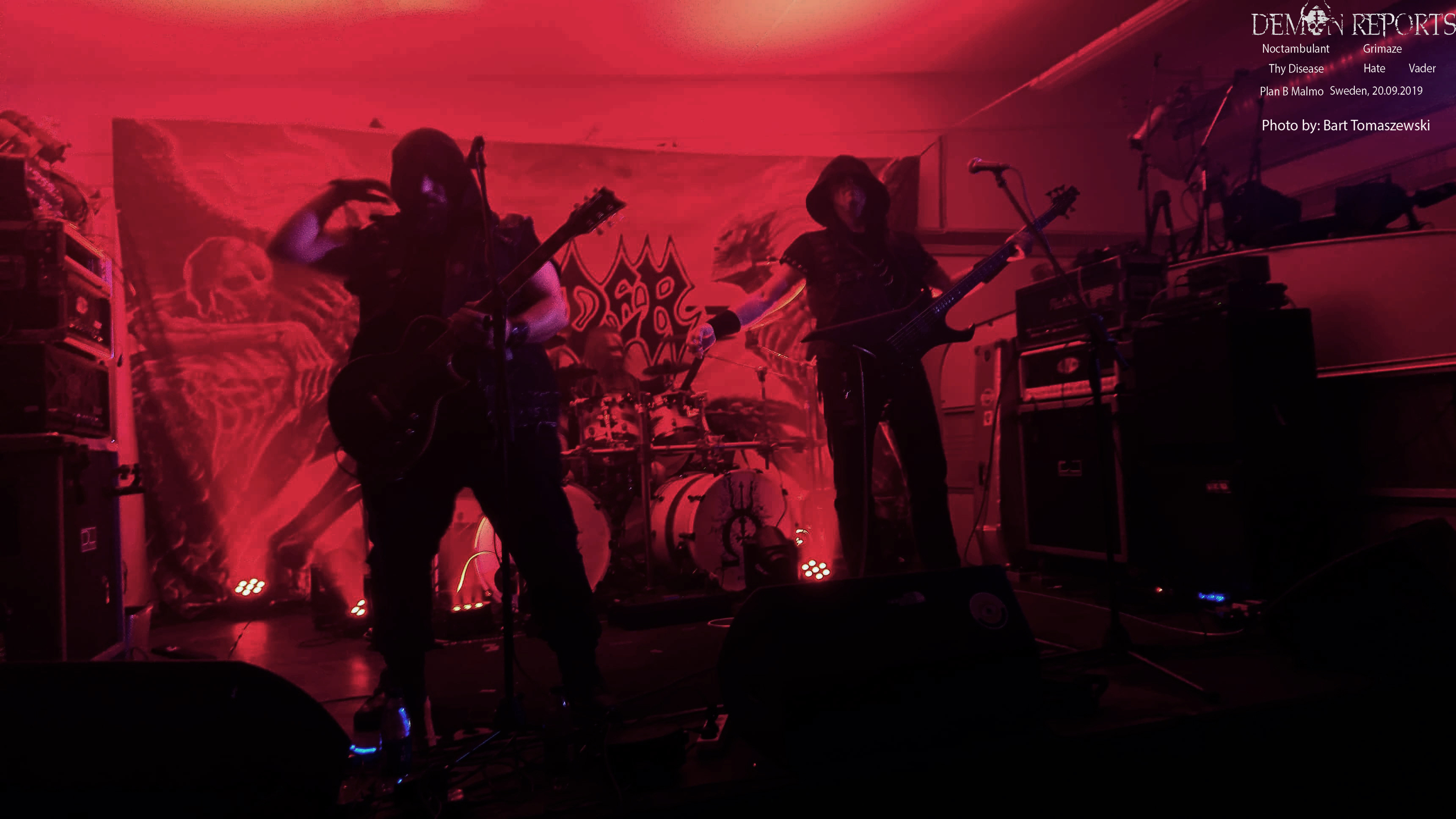 It wasn’t maybe some total insanity, but… Guys played first of all tracks from their debut and the only album “Planet Grimaze” released independently last year (in digital version only).

Well, especially as on the quite young band, who was found in 2013, they played good show and emanated some brutal energy. Another break and time for Polish invasion has come.

It was the youngest (what doesn’t mean that with short career in background) Thy Disease who was beginning
this. And here I could and even should repeat what I wrote a little bit above. Live they sound more Death Metal then on releases, especially these newer ones.

They gave a good show containing some mix of their creativity. Under the stage there still was some move, but, as I saw (of course I can be wrong, coz first of all I watched a band), it was first of all headbanging. By the way, their show was good, let’s say, overture of what happened after another break. I’m not sure, I didn’t look at the watch or count in the mind seconds, but I think it was a little longer one then other ones. 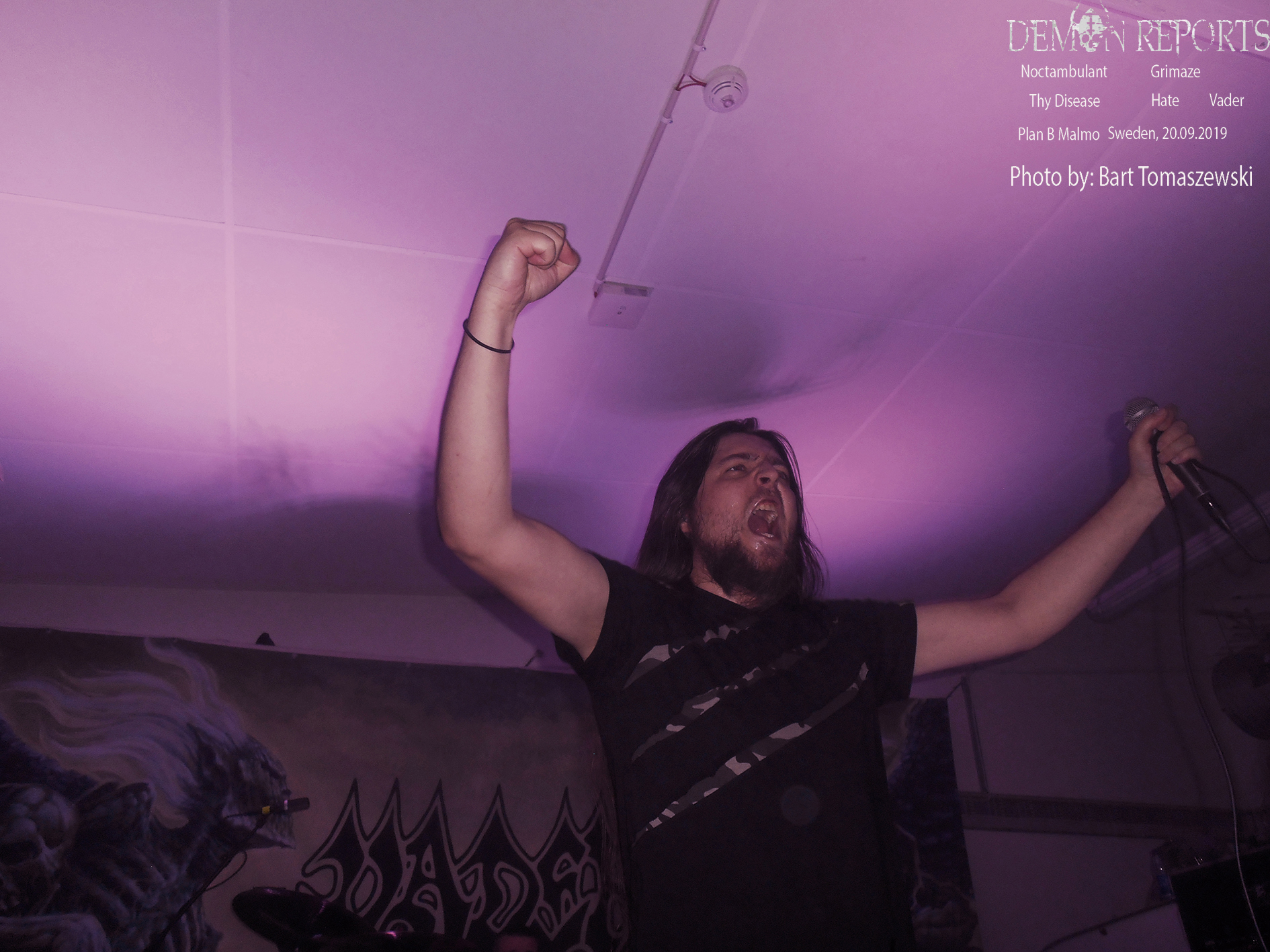 It was because stage had to be prepared. I mean, choreography here. To be honest, I preferred these earlier incarnation of Hate. But this one is also cool one. However, headbanging continued and even some moshes, too. Adam and company played quiet long and from the stage emanated some Black Metal atmosphere as well. Surely these skulls and musicians’ make-up helped in that. But I guess even without these attributes it was like that.
Of course between shows of two living legends of Polish scene there was time to grab some beer, talk with buddies and so on. 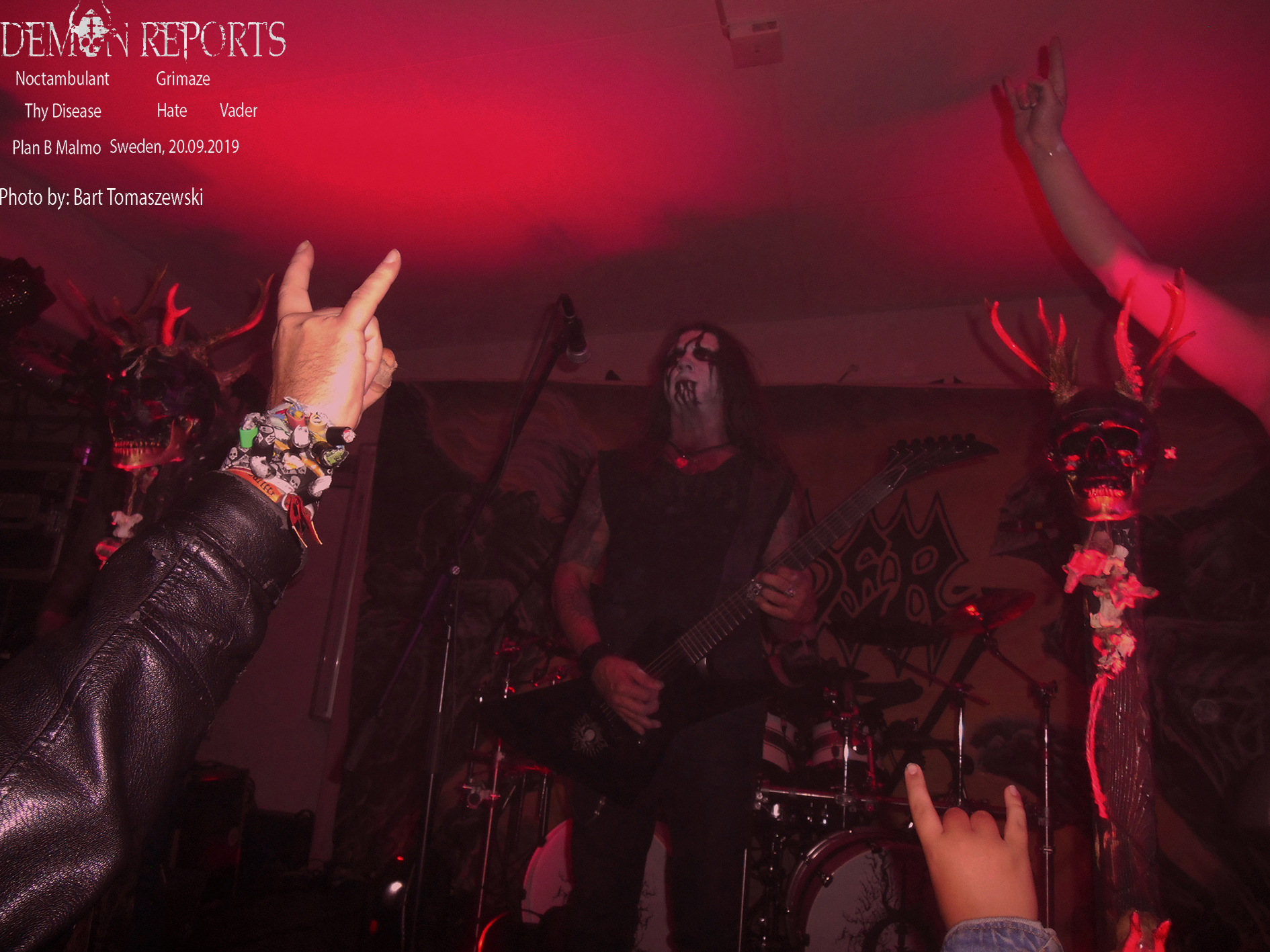 But all the time my thoughts were with what will happen for about a moment and I guess I wasn’t very good company at this time… hehehehehe… And finally I heard this word!!! So I came, well, almost run to be in first line. Well, I think I don’t need to write anything about how great Vader is alive. 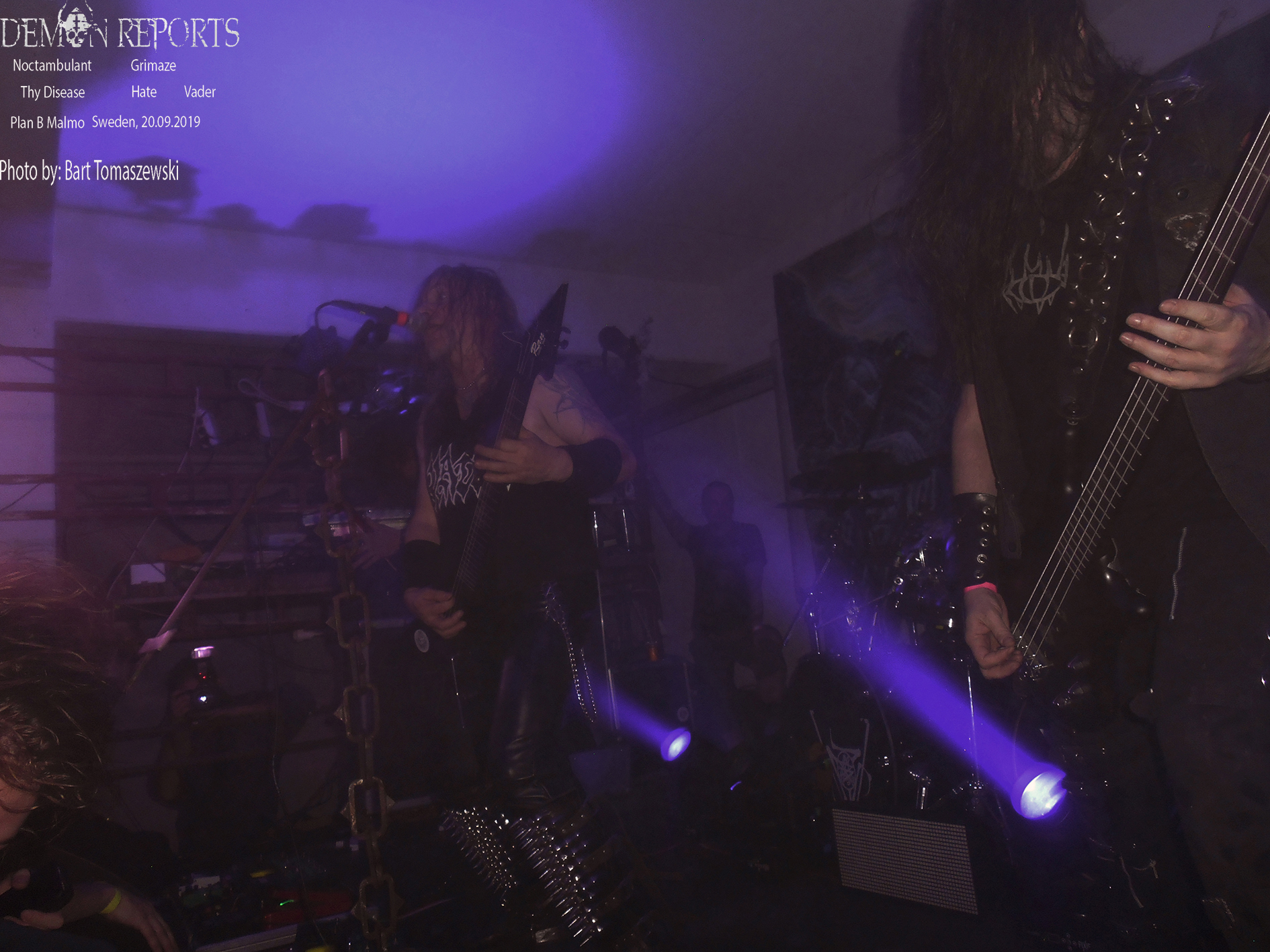 Albums also rule, but gigs are definitely their element!

Somehow in my opinion this is first of all Peter’s merit. Under the stage of course some inferno began and took place until the end of their show. And it was long one, coz crowd “forced” them to play longer then they probably planed. But well… Maybe I expected too much, but after what I saw on  Deranged I thought mosh will be even greater then it was in real. Well, it seems I overrated some things. Or maybe I’m mentally still in early 90’s when mosh in Poland was brutal as hell and almost everyone participated in that?!?

If I’d need sum this gig up in one word, it surely was great!!! I know I used this word few times, maybe even too many times on here, but since this everything was very well connected with this concert.