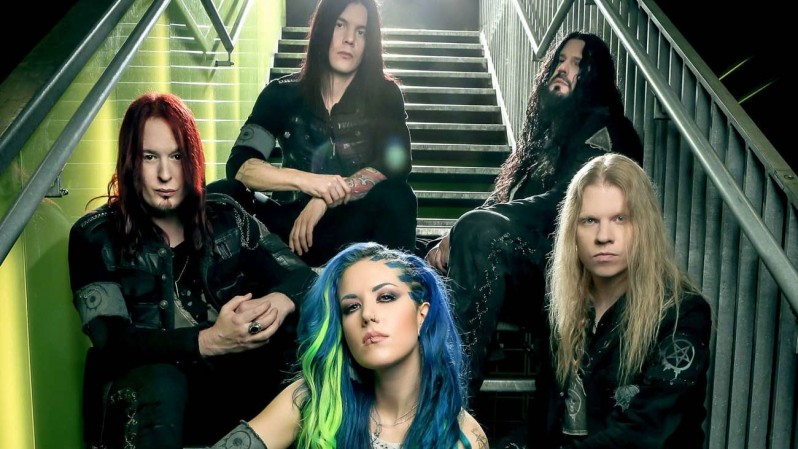 Swedish melodic death metal giants Arch Enemy are preparing some wicked material for the new album, with Alissa White-Gluz, this album is going to be very interesting, because that the question is that, is Arch Enemy going to record a massive successful album ”War Eternal”. Check out their comment’s  on the interview with Conny Schiffbauer of Germany’s Rock Hard magazine had a  interview with Arch Enemy singer Alissa White-Gluz and guitarist Michael Amott during this year’s 70000 Tons Of Metal cruise.

Here are the comment’s about upcoming Arch Enemy album:

Michael: “The new album is written. It’s partially recorded. Right now, Alissa living in Canada and I’m in Sweden, we’ve been e-mailing files and stuff to each other. I’d send her a demo, and then she’d put vocals on that in her home studio, sends it back, and I say, ‘Great.’ You know, it’s just been kind of like that — working a bit separately. And after this cruise, we’re actually gonna get together in Sweden at some point and… you know, there’s a lot of stuff left to do — all the guitars and vocals and bass.”

Comment’s about the musical direction of the new Arch Enemy material:

Alissa: “It’s hard to say until you hear the final album, I think. ‘Cause you’re so deeply involved with every detail that it’s hard to see the big picture of it until it’s actually all complete. I wouldn’t even know how to approach that question.”

Michael: “It’s very diverse, I think, the material. It’s got a lot of trademark Arch Enemy elements, I guess. I can think a song is really, really different, but then we’re gonna play it, it’s gonna be us playing it, Alissa singing, it’s gonna sound very, very Arch Enemy. So it’s not like a huge departure, but it’s definitely the next… I think we’re more relaxed, maybe, than on the last album… ‘Cause Alissa’s been with us for three years, and it’s not as tense, maybe, as it was the last time around. [Before we released ‘War Eternal‘] we were, like, ‘We don’t even know if people are gonna like this, if people are gonna accept us, Arch Enemy, with a new singer.’ We didn’t really know, which made the songs maybe more… To me, ‘War Eternal’ has a very kind of dark and very angry and claustrophobic feel to it, which is really cool. But I think the new one is gonna be more open and probably more powerful, actually.”

Michael: “Not with the songwriting, but he’s gonna be playing on the album, of course.”

Michael: “Yeah, I don’t wanna confuse people, but what happened was the very first Arch Enemy album featured a completely different lineup, with my brother on guitar, and Johan [Liiva], the original male singer that we had on the first three albums. So it was the twentieth anniversary coming up. That album, and the three albums that we did with Johan, were very successful in Japan at the time, in the ’90s, so we thought we’d do something to commemorate that and have some fun. So what we did is we went over there and played seven shows, a sold-out tour, that did very well for us. And, yeah, one of the nights was recorded. But I think it’s only planned for release in Japan. We’re just keeping it very separate. But that was a lot of fun. It’s always fun to play with my brother, and, of course, it’s great [to play] with Johan as well; it’s fun.”

Alissa: “Yeah, I’m gonna be releasing a solo album in probably early 2018. And the project is just called Alissa, because there’s no band — it’s just me. But I am collaborating with a lot of different musicians that I’m friends with — past and current members of Arch Enemy, people from Kamelot, Doyle [Misfits]. Basically, the goal with this project is just to do music that I love that’s different from what I do with Arch Enemy and do it with people that I love. So far, I really like how it’s going. And it’s just another creative outlet for me. So I’m looking forward to seeing what people think about that.”

On what the music on her debut album sounds like:

Alissa: “It’s hard to describe, again, because, like I said, it’s not finished yet, so I’m not exactly sure. But so far, I would have to say it’s like maybe Opeth meets Muse [laughs], if you can call it that. So I don’t know if I would call it metal or if I would call it rock. There’s clean singing in there, there’s gonna be some interesting covers in there. It’s definitely heavy, it’s definitely emotional, powerful. That’s what I like, that’s the kind of music I like. Other than that, I’m not sure how to label it.”

Arch Enemy will release a new live DVD, “As The Stages Burn!“, on March 31 via Century Media Records. The set contains video of the band’s largest stage production to date from their performance last summer at the Wacken Open Air festival in Wacken, Germany.

Arch Enemy is going to celebrate the release of “As The Stages Burn!“ with a number of European shows with special support from Lacuna Coil and The Haunted.