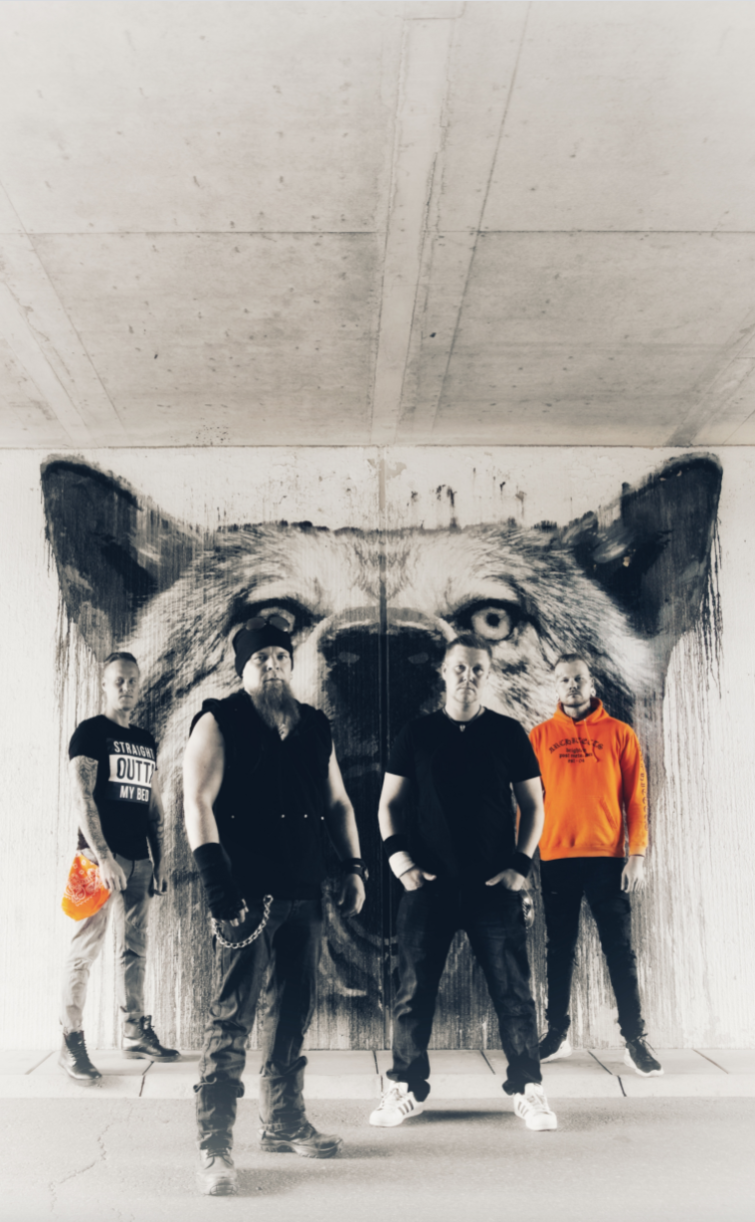 Finnish modern metal masters As I May premieres the official music video for the “Breaking Myself Away”. taken from the new official upcoming record “Karu”, which will be released in 2022, via UPRISING! Records.

This song is one melodic modern entertaining crusher – with such smooth combination of three vocals, drum mastery that can not be heard so often, generic riffs and divine melodic approach, filled with emotions, strong ones in this case. And all of this indicated the complexity of the song, also that melodic approach – that completely dominated every second of the song.

Drum set completely carries out the song. Drummer Leevi Räsänen gave it’s best so that this song has that outstanding rhythm section and this is one of the rare moments where one drummer is basically the spine of the whole song. He did an fantastic job, rare drumming and feeling for the rhythm – making the song just unique and powerful.

And the song is also balanced perfectly between the melodies, vocals , growls, drum set and generic riffing. This melodies are pointed out through out the whole song, giving the song that special/unique atmosphere of melodic metal divinity. The rest of the technical parts are fused so skillfully with this melodies -that creates this awesome experience of aural domination.

Three Vocalists Lasse Hiltunen,  Tipi Nokelainen, Jani Valhola in one song and that they manage to sound so coordinated, with-out one messing up the balance, coordination between them. All of them definitely sounded so perfect with each other especially the clean vocal parts passing to growl vocal part, that fusion is arranged in the masterful way. Everything about this song is produced and arranged in amazing way, details pointed out, melodies floating so clean – with clean sound in the song. Riff domination making the song intense and strong and of course the high quality drumming completely demonstrating the power of the it in every songs there is out there and in this one, as well. Showing how the good drummer can totally transform the song into something so great and perfect.

The story of the song is about breaking the weakness inside you, not tolerating to be a looser and to be weak. To raise up and be a man, taking the fight to a another level. Being strong and good for yourself, overcoming weaknesses and win the battle against them . The clean voice Vocalist presented this in such perfect way, emotional – but at the same time in such a strong way. You can hear power in his voice – while he portraits his own personal thoughts regarding lyrics – since we all have some weaknesses that we need to overcome. And this is fused excellently with the whole song- the lyrics and the sweet enchanting melodies – present the very essence of the song.

Their music reminds of In Flames and Amorphis, and also it can heard HIM and The Unguided here, as well. Melodic parts are similar to this three bands, emotional part is similar to HIM and the lyrics remind of In Flames recent work. All of this in one band, surely presents the divine melodic metal, that has every quality to be one. And this song to be a powerful and dominating tune of modern melodic enchantment.

The video is creatively produced and directed, they did an fantastic jobs with neon colors. Since the colors in their essence present the emotions of one human being. And the whole video with this adaptation goes very well – with the whole story of the song and the listeners and viewers will like it very much. The whole video speaks about the struggle within our self, both visually and lyrically, fused with the outstanding melodic metal touch in modern style.

Break the weaknesses, find the power through melodic metal divinity.

“In “Breaking Myself Away” we are using more vocal power with our three vocalists than ever before” “The guys have found their place and space better than before. Also, this song has more rhythm than any song we have ever written. The drums are huge! They sit well together with bass and it has those melodies that we are known for”.

As I May is a four-piece modern melodic metal band from Mikkeli, Finland – formed in 2016. The band combines modern elements, yet keeps focus on the heavier side of the music, and they sound like a modern-day US mixture of In Flames and Amorphis, so almost any metal fan would get a treat from listening to the music of these Finns! It’s a mature band, displaying a truly professional attitude towards the modern sound of heavy metal. The soul of the music lies within the catchy melodies and the big choruses.

The band released their debut album “Speak No Evil” in 2017, and got the attention of lots of fans and from the record label Rockshots Records, who decided to sign As I May for the release of their 2nd album “My Own Creations”, which was released in the summer of 2019. In Asia, the album was released through the label Spiritual Beast.

As I May played a wide array of local Finnish shows and were booked for a European tour, as support for the Brazilian powerhouse-metal act Semblant… and then Covid-19 reared its ugly face, postponing everything for everyone.

The tour is postponed until the spring of 2022 and in the lock-down period, As I May have spend the time, composing and recording their brand-new opus ”Karu” – a venture into more modern and direct in-your-face songs, which caused for UPRISING! Records to sign the band on a worldwide deal.

Check out the official premiere of the music video for the “Breaking Myself Away”, below: