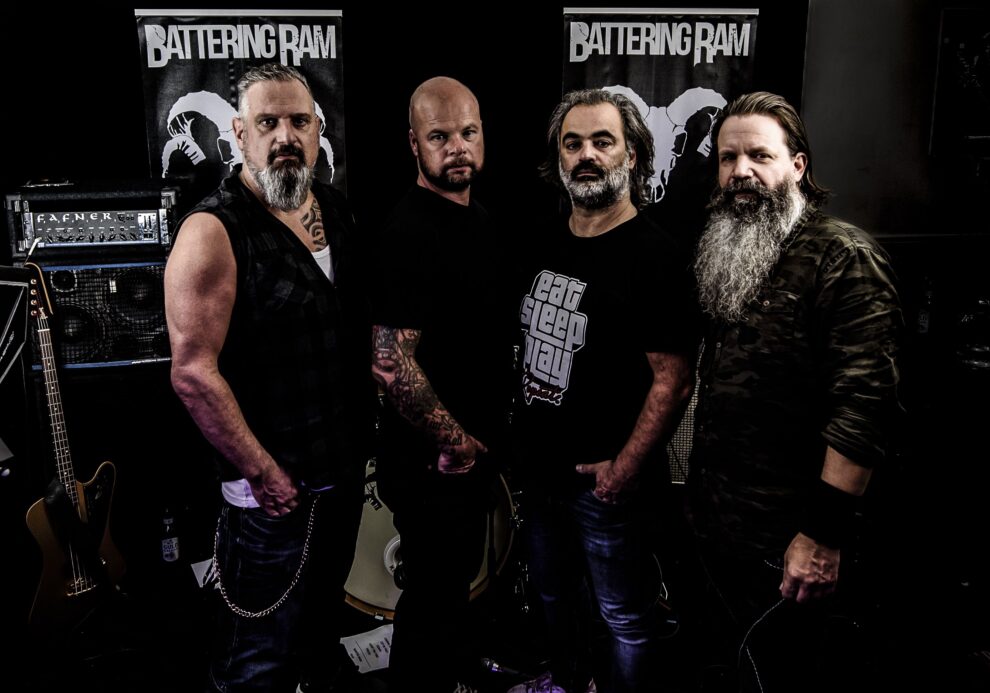 Swedish hard rock masters Battering Ram premieres the new official music video for “Coming Home”, taken from the new official upcoming record – which will be released in 2022, via UPRISING! Records.

From beginning till the end, this song is a catchy and classical rock – filled with some heavy explosive riffs, balanced and coordinated drum and unique/specific vocals arrangements, as well as the vocals by Vocalist Johan Hallström. All of this shows that this is a blasting rock song – with some true rock power to it. It is intense and catchy all way around, it’s intensity is presented by this sharp approach that is delivered by the production part of the song and it is mixed with arrangement’s in amazing way – so that the song can have all of the groove vibe and electricity that needs to have, of course to be catchy as it can be – too. Vocals by Johan are so smooth, he totally carries out the song perfectly – staying in the focus of the song – following in a great way the riff and drum pattern, making it just the awesome and balanced rock song.

The short solo part is just perfect passage in the song, giving the song this special vibe – that forms the structure of song in the right direction. Atmospheric  cheering chorus gave the song it’s symbolical modern rock attribute, just creating this specific rock atmosphere, that the hard rock fans will just live. It just rhythmical, emotional, catchy and intense rock song – for the rock hearts and ears to enjoy. Prefect fusion of atmosphere, rock catchiness  and breadthening melodies – leaves an orthodox good old rock n’ roll influence through the groove and crushing hard rock. The lyrics in the song are about nostalgic times of coming home, how we all want to get back to our origins and our first experiences like in our home, where we grew up.

And of course “There is no place like home” phrase  is very well adapted to lyric part of the song, very emotional – but at the same time powerful and the guys did just outstanding job delivering the atmosphere from lyrics. Amazing video adaptation worked very well for the band, showing even more catchiness from the song in that raw rock style, that suits them very well in the video.

Come Home, remember the good times and who you were -through the glorious sounds of rock n ‘ roll.

Imagine the power of timeless Scandinavian rock, going pair to pair with the uncompromising heaviness of NWOBHM and a few other influences, gathered to shape the best hard rock possible. That’s exactly what you get with “Coming Home”, the new single from Sweden’s hard rock favorites Battering Ram. Fresh from the outstanding reactions to their debut album, and recently signed to UPRISING! Records, the Swedish four-piece is back with a new song from their upcoming album, to be released next year.

Battering Ram comes from a small Swedish mining town – Filipstad. A place you never heard of, a place you’ve never been to and a place you most likely will never visit. Up there north, in the Scandinavian woods, man is still man, life is still easy, and souls are still free. Up there music still rock. Hard. Hard as a rock.

This heavy weight quartet founded in 2017 in the deepest forests of Sweden quickly arouse great interest among rock fans home in Scandinavia, as well as on international ground. Rockers all over the world have realized that there are some heavy pieces of steel casted among gnomes and trolls in the Nordic fairy tale woodlands.

Hard as a rock and harder than hard rock. Heavy as lead but nor just metal. Still, at the end what Battering Ram plays is a plain straightforward rock n’ roll with a lot of weight, power and attitude.

This band stands for everything what old-school rock music once was about. The band is both in sound and quality close to the genre’s heavyweights with its origins in the 1970’s and 80’s. While the solid base of Battering Ram’s sound is genuine and authentic, they still seal their music with their own modern signature.

With their first full length release, Battering Ram unabashed smashed in the doors to the rock scene.  The record included a whole goodie-bag of fast and heavy old school rock classics, like the singles “Scared for My Life”, “The Sign” and “Wanted Man”. And now it is time to tease the Swedish rockers’ long-awaited second album, with the new single “Coming Home”.

Check out the official premiere for the music video of  “Coming Home”, below: