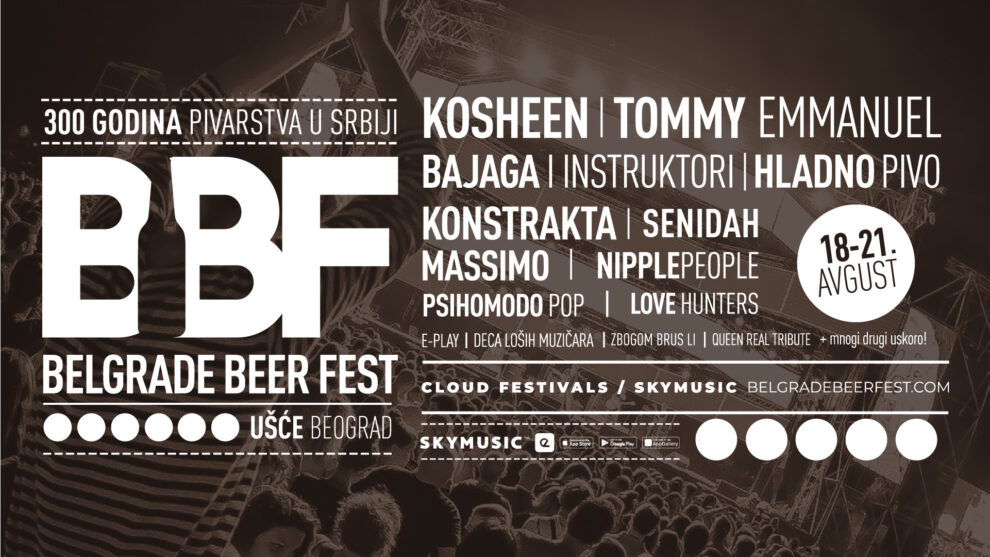 The traditional city manifestation in Belgrade/Serbia is one of the most favorite festivals in Balkan region – it’s called Belgrade Beer Fest – that will be held this week in a new format and with numerous innovations from August 18th to 21st at Usce. The nineteenth edition of Belgrade Beer Fest will mark the jubilee – 300 years of brewing in Serbia, while during the four days of the festival on four stages –  there will be 50 performers on all stages, among them are  Tommy Emanuel, Kosheen, Bajaga i Instructori, Hladno pivo, Konstrakta, Senidah, Massimo Savić, Nipplepeople, Atomsko Sklonište, Blaža i Kljunovi, Psychomodo Pop, Love Hunters, E-play, DLM, Queen Real Tribute and many others. This year, the festival will be divided into two zones: The first one  is “Cloud” zone with numerous contents and attractive programs for all ages, including: Beer market and Craft Beer Land with over 300 beer brands, Moto Platz (with a special stage and music program, wall of death, camp, exhibition of custom and vintage motorcycles, tattoo studio, etc.), Intergalactic Diner Foodland, Silent disco stage, Luna park, panorama balloons, ultimate selfie tower 17m high from which visitors will be able to take the best selfie ever. Electro stage and to the “Concert Zone”, are close to the main stage and performances by the biggest music acts – numerous breweries and a large selection of beers, also there will also be numerous contents and partner zones.

Entrance and price info of Belgrade Beer Fest, below:

Entry to the Cloud Zone —> Free

Entrance to the Concert Zone until 7.30 pm —> Free

Entrance to the Concert Zone from 19:30 —> with the purchase of consumption in the amount of two drinks (590 dinars). 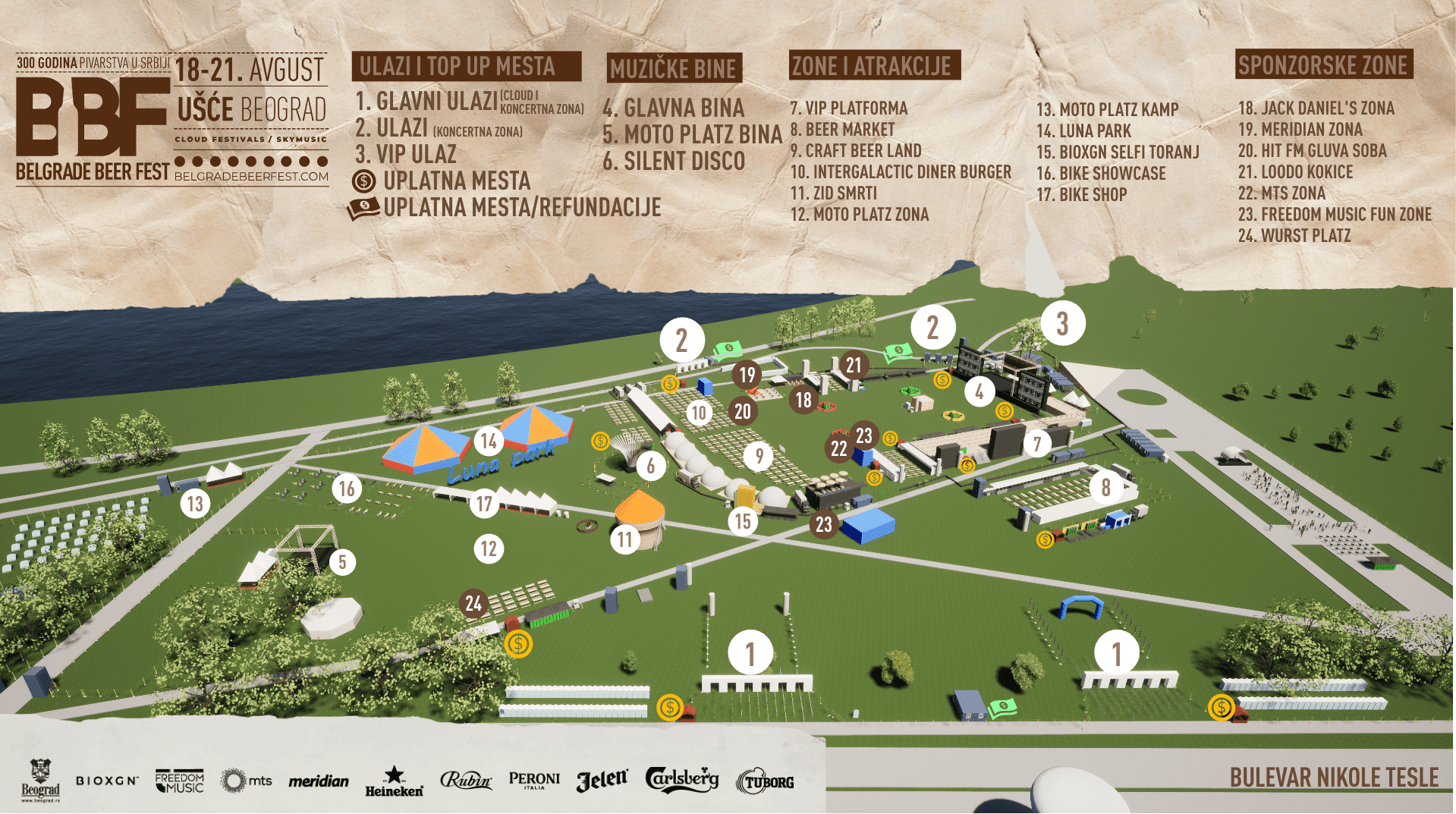 This year the festival will be divided into two zones:

“Cloud zone” with numerous contents and attractive programs for all ages, including: Beer market and Craft Beer Land with over 300 beer labels, Moto Platz (with a special stage and music program, wall of death, camp, old-timer exhibition motorbike, tattoo studio, etc.), Intergalactic Diner Foodland, Silent disco stage, Luna park, Bioxgn selfie tower 17m high, from which visitors will be able to take the best selfies ever. Entrance to this zone is free. This zone can be entered – at the main entrance that is located on Nikola Tesla Boulevard (entrance 1 on the map).

“Concert Zone” that is adapted  to the main stage and the performances of the biggest music acts, will also provide numerous contents and partner zones. Entry to this zone is free until 7:30 p.m., while after 7:30 p.m.  – entry will cost with consumption  590 dinars for two drinks. And visitors will be able to pick up at specially marked counters during the festival. The concert zone can be entered directly, from the side of the river (entrance 2 on the map) or from the ”Cloud zone”. The capacity of the zone is limited, so all visitors are advised to ensure safe entry in time.

Note: one consumption is valid for one day.

Entrance to the VIP zone of the festival will be charged. And current promotional ticket prices are:

Payment for food, drinks and consumption at the festival will take place in two ways:

Install the free eFinity app and get ready for the festival!

During the Belgrade Beer Fest (August 18-21), additional night departures from Novi Beograd station to Novi Sad, Pančevo and Vršac will be introduced, in cooperation with Srbija voz:

This year’s festival celebrates the jubilee of 300 years of brewing in Serbia. And there will be 300 different beer labels – that will be presented at the Beer Fest! In addition to big beer brands, such as Carslberg, Heineken, Apatinska pivara, Peroni, Skopska pivara, Valjevska pivara, BIP, Jagodinska pivara, there will also be present appreciated domestic craft beers, such as Dogma, Gwint, Kabinet, Krugher&Brent, Robocraft, Salto , The Syndicate, The Black Turtle, Tron, The Sum and Brewery. Beer fans will have two specially designed zones at the festival dedicated to them – Beer market and Craft Beer Land.

See you at Beer Fest!

The Noctambulant will tour Europe with Vader, Hate and Thy Disease!
Priorities released two-track compilation for ”Medusa” and ”If I Believed”!