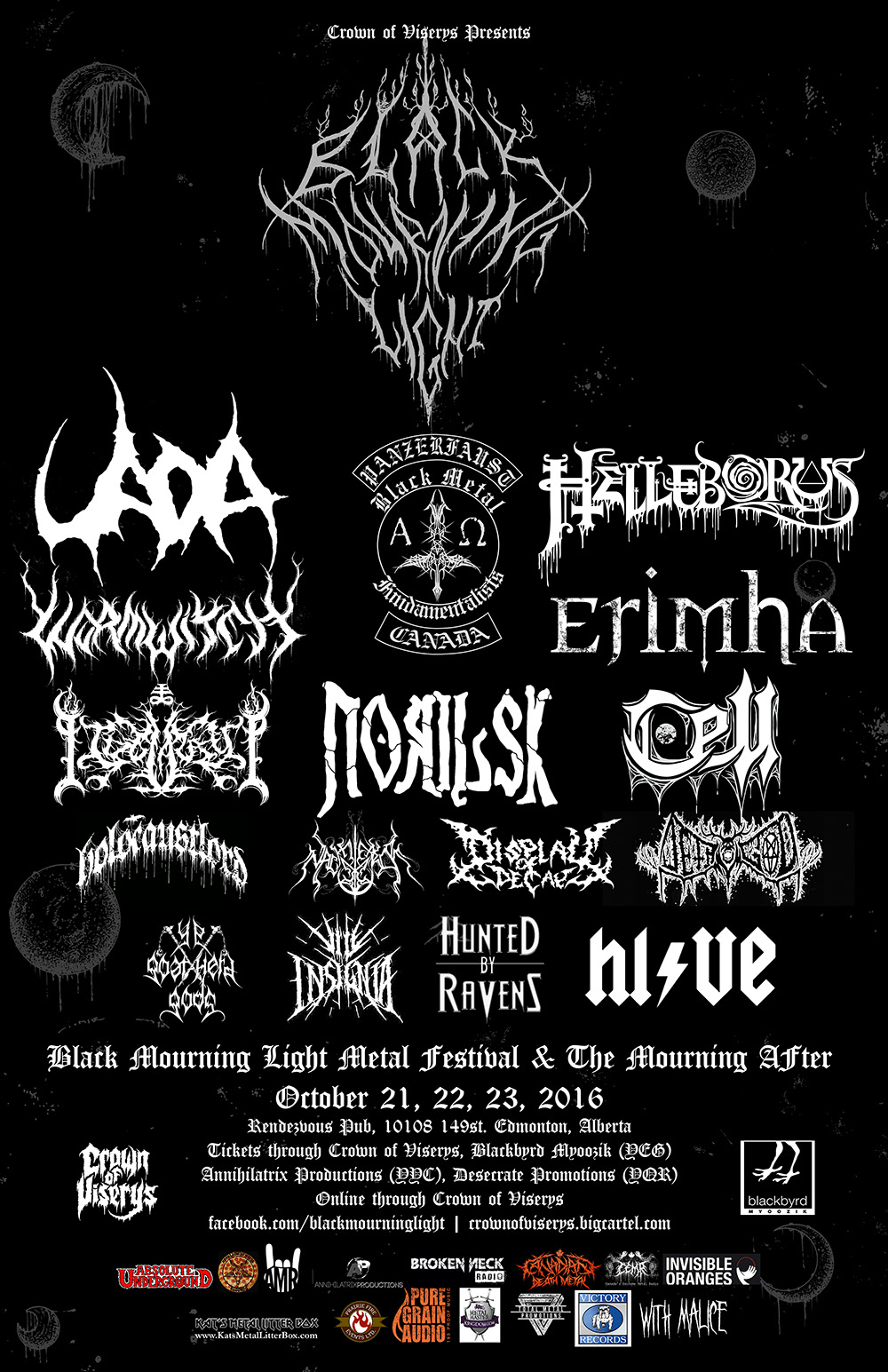 Edmonton, AB based Black Mourning Light Metal Festival, a celebration of black, doom, and dark death metal presented by Crown of Visery’s from October 21st to 23rd is proud to announce their 2016 line-up of bands from across Canada and USA.

Friday, October 21 will be headlined by Toronto’s Panzerfaust, alongside Montreal’s Erimha, and Edmonton’s Idolatry. Display of Decay (Edmonton), the night’s only death metal band, Calgary’s Vile Insignia and Hive will set the tone. Idolatry and Vile Insignia are the only returning bands from Black Mourning Light 2015.
Saturday, October 22 will see Portland, Oregon’s UADA headline with support from Manitou Spring, Colorado’s Helleborus and Vancouver’s Wormwitch. Norilsk (Gatineau, QC), Cell (Winnipeg), Holocaust Lord (Victoria), Nachtterror (Regina), Dethgod (Calgary), Ye Goat-Herd Gods (Calgary) and Hunted By Ravens (Red Deer) will bring a mix of black, death, and doom to set that night’s tone.
Sunday morning, October 23 will not feature bands performing, but rather bands eating. Sunday will be reserved for The Mourning After, the VIP exclusive breakfast with all the bands.

Black Mourning Light is still taking submissions from filmmakers to showcase their work (preferably dark/ horror) at this year’s event. The films will be viewed at The Rendezvous equipped with televisions to showcase films via DVD. Most films will be shown during band performances.

Filmmakers interested in having their work shown at Black Mourning Light 2016, can use the following Filmmaker’s Application, located here.
Watch the video trailer with clips from BML 2015:

Black Mourning Light Metal Festival is the black metal and doom festival founded by Dustin Ekman of Crown of Viserys. Created to fill a void in Edmonton’s black and doom scene.

After a successful debut during Halloween 2015, Black Mourning Light Festival returns for a 2016 edition set from October 21st-23rd. The onslaught will be held at the Rendezvous Pub with a lineup of bands from across Western Canada all in the vein of black and doom metal along with select death styles. Last year’s line up included 11 bands from three provinces such as headliner Idolatry (Edmonton), Altars of Grief (Regina), Noire (Winnipeg), Ossific (Winnipeg), Vile Insignia (Calgary) and more.

Those that attended the 2015 inaugural ritual will not be disappointed by 2016, as they can expect a different while similar experience to that event. Due to the proximity of Samhain, costume prizes will still be awarded to those who wish to dress up early and celebrate the season.