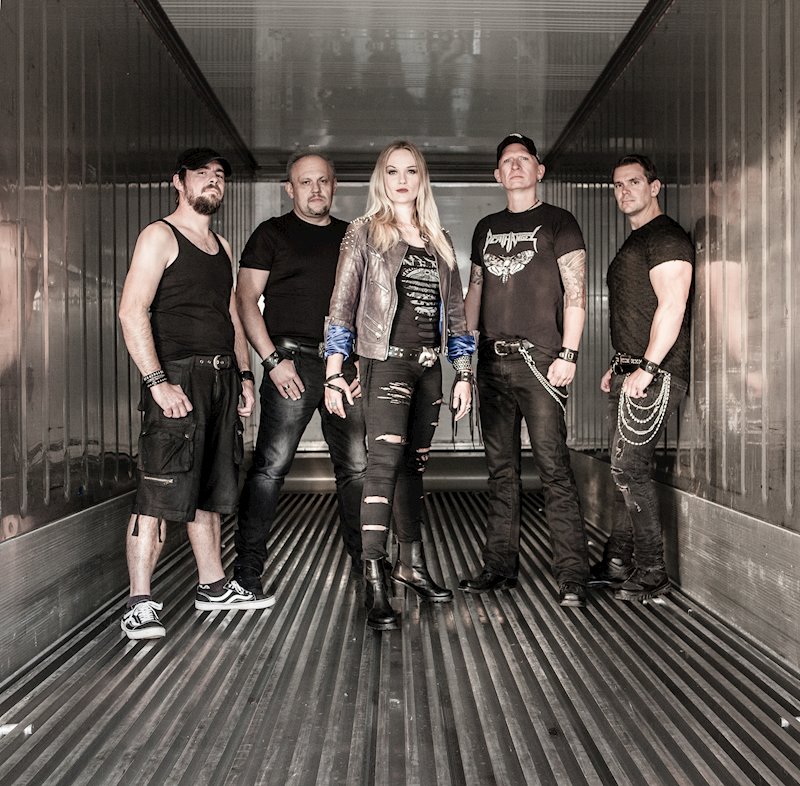 
Blackdraft premieres the song called “Out to the Open Sea”, which is taken from their latest release “The Quest”, which was released last year, via Mighty Music Records.

This song is technically played very well. The thing about the song is that it’s very melodic, it has fast and crushing riffs, that makes this song enjoyable for listening, and it has that euphoric vibe to it, that gave some positive flavor in music style to the song. Solos are very well combined with the riffs, also drums are amazing, the drummer has that perfect felling for the rhythm. Vocals are unique the female Vocalist of the band has that double vocal effect, the one where she sings clean, and the other that is also clean, but not fully clean, it’s more the like a growl. Fast song with great lyrics, that are about the sea and the adventure, and all of this is mixed up with the story, the struggle, the pain in the story everything combined excellent with music, and they did an a great job. Pure rock/metal melodic song that will infect the listeners with the melodic chorus and music, and make them live their dream in melodic paradise.

Statement of the band about the song and the music video:

”The single “Out to the Open Sea” is the fifth chapter from current concept-album “The Quest”. This song describes the journey out on the rough sea during the adventure of the protagonist Runa Ágústsson. It is a cold and stormy day on which this chapter takes place. The songs describe in a musically way the high waves and heavy weather through which the ship must travel on its way out to the sea. It is a struggle with natures forces on the devils back but the song takes the ship save, motivating and significantly strong through the storm.”

The north of Germany, marked by rough weather, sometimes interrupted by hot sunny phases, is the home of Blackdraft. Four northmen and a woman set out from Hamburg, the pearl of the north, to carry their definition of contemporary metal sound into the world. Their coastal origin also finds its way into the 15 songs of the second album “The Quest”. The concept album tells the story of the young researcher Runa Ágústsson from Hamburg, who sets off for Iceland to start a journey into the deep sea from there. Over the course of her adventure she meets strong, strange and eerie characters as well as fantastic deep-sea creatures and takes the listeners into the cold abysses filled with evil secrets.

Musically following this idea, front woman Julia Dorothee Wallenius, guitarist Karsten Wallenius, guitarist Fabian Adler, bassist Tomasz Kolonko and drummer Jan-Hendrik Köbel worked on the realization of this extraordinary work for about two years. Hard guitars meet varied female vocals, sometimes seductively soft, sometimes exuberant and almost aggressive. Karsten Wallenius takes over the vocal counterpart in the form of dark growls. The result is a head cinema full of emotions and contrasts that fascinates the music fans and takes them on an intensive journey which captivates the listenersuntil the last note. Support on the keyboards, which create a special mystical atmosphere, was provided by Niels Löffler from Orden Ogan.

But Blackdraft did not suddenly emerge from the musical void. The individual band members were previously active in local formations before they found each other in 2015 and brought Blackdraft to live. Already in 2016 they released their debut “Recipe Of Pain” on their own initiative on a small label and thus set a first buoy on the big ocean of rock music. Consistently good reviews, nationally and internationally, motivated the quintet to tackle the matter more professionally. On the wall in the rehearsal room, a piece of paper was hung up, clearly visible for everyone, on which the goals to be achieved were written and Blackdraft then gradually worked through them. In 2017 they found a management and while also working on their new album, played various festival shows, several support tours and gigs for Inglorious (GB), Mob Rules (GER) as well as Masterplan (GER/SWE) over the following months. The final stone of the puzzle was laid in September 2018 when Blackdraft, in accordance with their To-Do-list, reached a new home harbor by signing a worldwide deal with Mighty Music, Denmark for the release their coming album “The Quest”on December 14th.

The journey has only just begun and Blackdraft are ready to take all friends of hard yet melodic music on this special musical adventure.

Check out the stream and the premiere of the official music video for the song ”Out to the Open Sea” here, enjoy it:

Black Swamp Water premieres the music video for the song “The End”, a song about the dark side of life, that never looked so black!
Wacken Open Air adds 26 bands to billing!