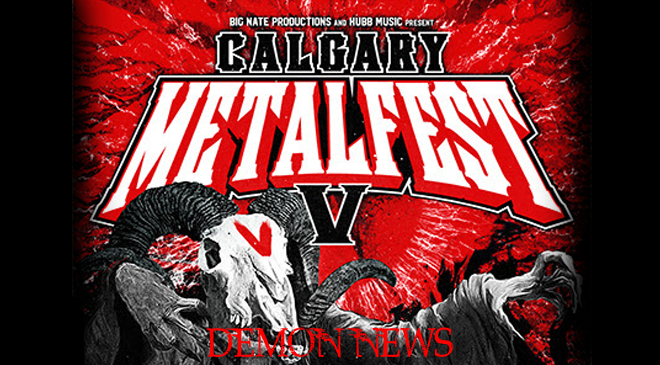 Big Nate Productions and Hubb Music Proudly Present CalgBig Nate Productions ary Metalfest V! A Historic Night of Canadian Metal!
On September 17th, 2016 at Flames Central, international touring act ANNIHILATOR will perform a blistering 75 minute set, their first show in Western Canada since 1993. Also appearing, will be the recently reformed and original lineup of speed/thrash metal pioneers EXCITER, their first Western Canadian performance since 1985. The show will be opened by thrash veterans RAZOR and SACRIFICE. These bands are all hot off the heels of multiple critically acclaimed festival performances in the US, Europe, and South America. Calgary’s GATEKRASHÖR will provide last call entertainment.
Club shows will be held at The Ship and Anchor Pub, Distortion – Live Music Venue, and Dickens Pub, September 14th through 16th. All shows 18+. Full lineups and more to be announced!
Tickets and VIP Passes for September 17th will go on sale Friday May 6th at noon MST through http://getqd.com/calgarymetalfest and Sloth Records in Calgary. More info as it becomes available at http://calgarymetalfest.com and http://bignateproductions.com

Calgary Metalfest, in its fifth annual year, was started in 2012 by festival organizer Nate Reno after his experiences working with Monsters of Rock (2008) and Noctis Metalfest (2008-2013).