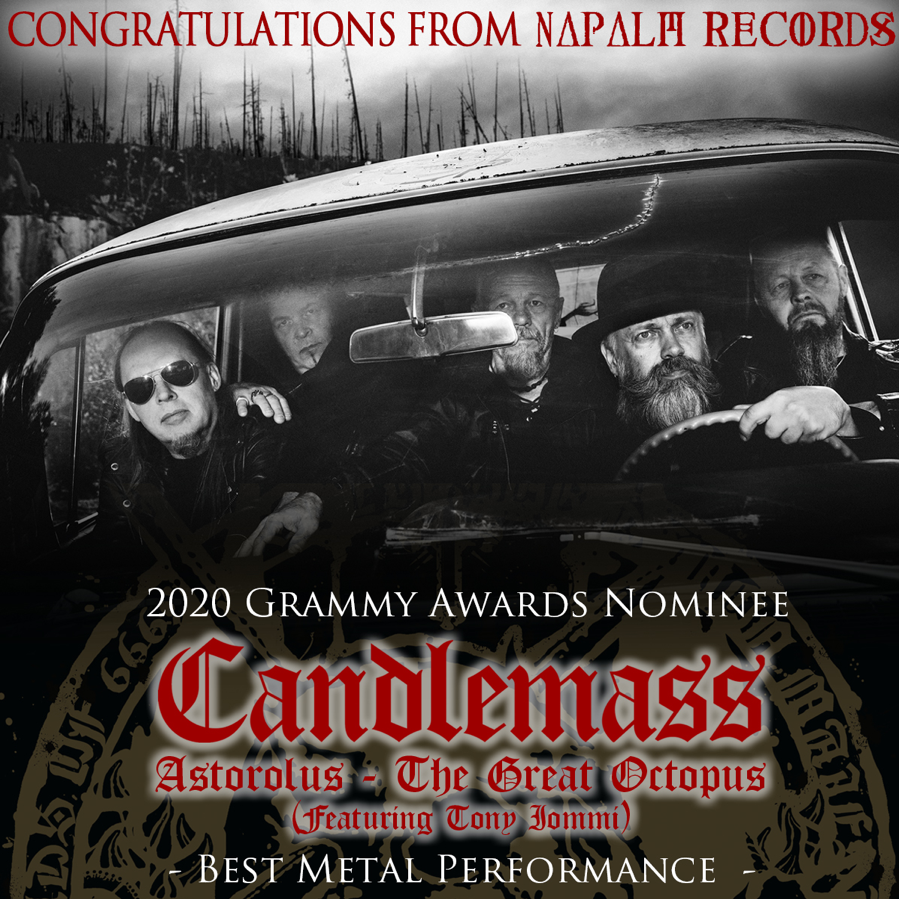 Candlemass are truly the manifestation of pure doom metal! Early 2019 saw the release of their latest album, ”The Door To Doom”, via Napalm Records– an offering that features an unforgettable pairing with legendary Black Sabbath guitarist Tony Iommi on the song “Astorolus – The Great Octopus.” The song has now been nominated for a 2020 Grammy Award in the “Best Metal Performance” category! This is the first nomination for the band and the first nomination for Napalm Records!

The Grammy Awards ceremony will be held on January 26th and broadcast on CBS.

Bassist Leif Edling of Candlemass states this about the nominations:

“We are very proud and honored to be nominated for a Grammy! Actually, a couple years ago, we said that the previous album would be the last one, yet here we are with a new record out plus Grammy talk. Wow! Proves that you should never give up. I must also take my hat off to Tony Iommi, who was kind enough to perform an amazing guitar solo on “Astorolus – The Great Octopus”. Thank you, thank you, thank you! We’re happy, thrilled, excited… and a bit shocked!”

Sebastian Münch, A&R Napalm Records states this about the nomination:

“We are thrilled that Candlemass has been nominated for a Grammy Award for their track “Astorolus – The Great Octopus”, featuring the iconic Tony Iommi. This is the first nomination for them and for Napalm Records, so we couldn’t be more excited. Congratulations, Candlemass!”

”The Door To Doom” unsurprisingly follows the plot line mastermind, songwriter and bass player Leif Edling established in the past years: epic world class doom metal that relies on slow mammoth riffing. With Johan Langquist`s highly dramatic vocal style and the love for details, the band made this an epic album. ”The Door To Doom” was produced by Marcus Jidell.

Check out the music video feat. Tomy Iommi for the “The Great Octopus”, here:

Archspire will play ”Relentless Mutation” in full during European Tech Trek tour, releases Christmas massage for the fans!
Me And That Man featuring Adam “Nergal” Darski Sign with Napalm Records!