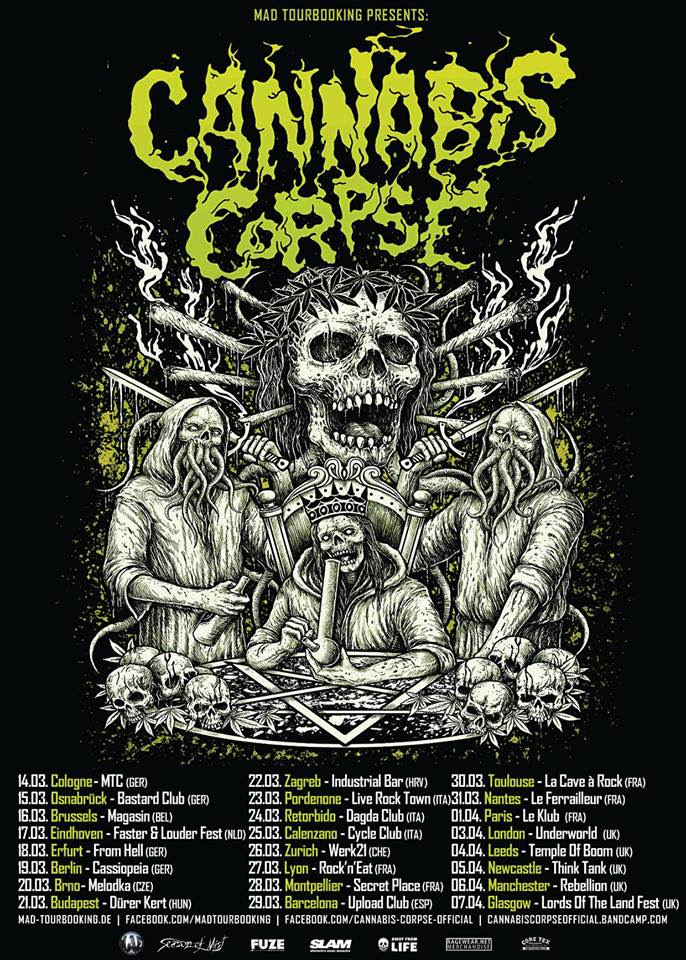 Cannabis Corpse are kicking off their European tour at the MTC in Cologne, Germany today on March 14th. The weedy death metal addicts will be joined on stage by a host of local support bands. Their trek across the old continent will continue to roll and steam through nine more countries before evaporating in the UK with a final inhaling at the Lords of the Land Fest in Glasgow, Scotland on the April 7th. 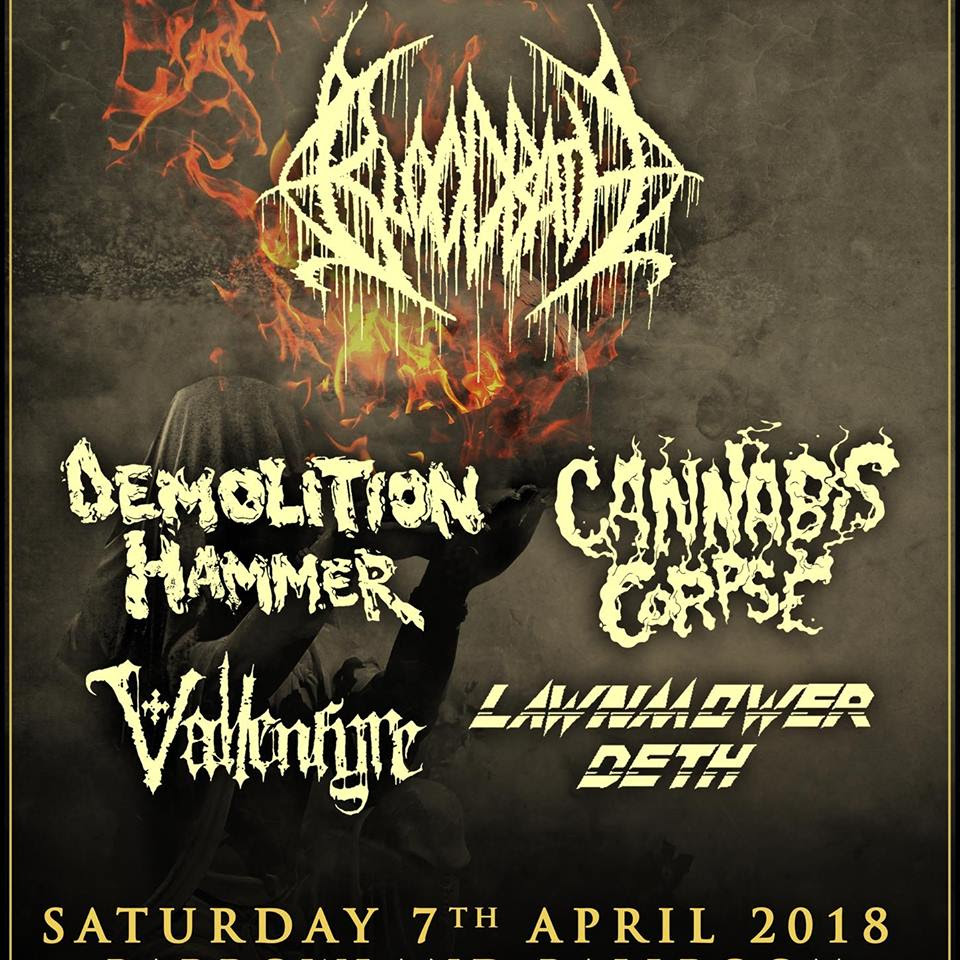 Cannabis Corpse will be touring in support of their smoking hot latest album, ”Left Hand Pass”, which was released on September 8th.

Artwork and tracklist of ”Left Hand Pass” can be viewed below. 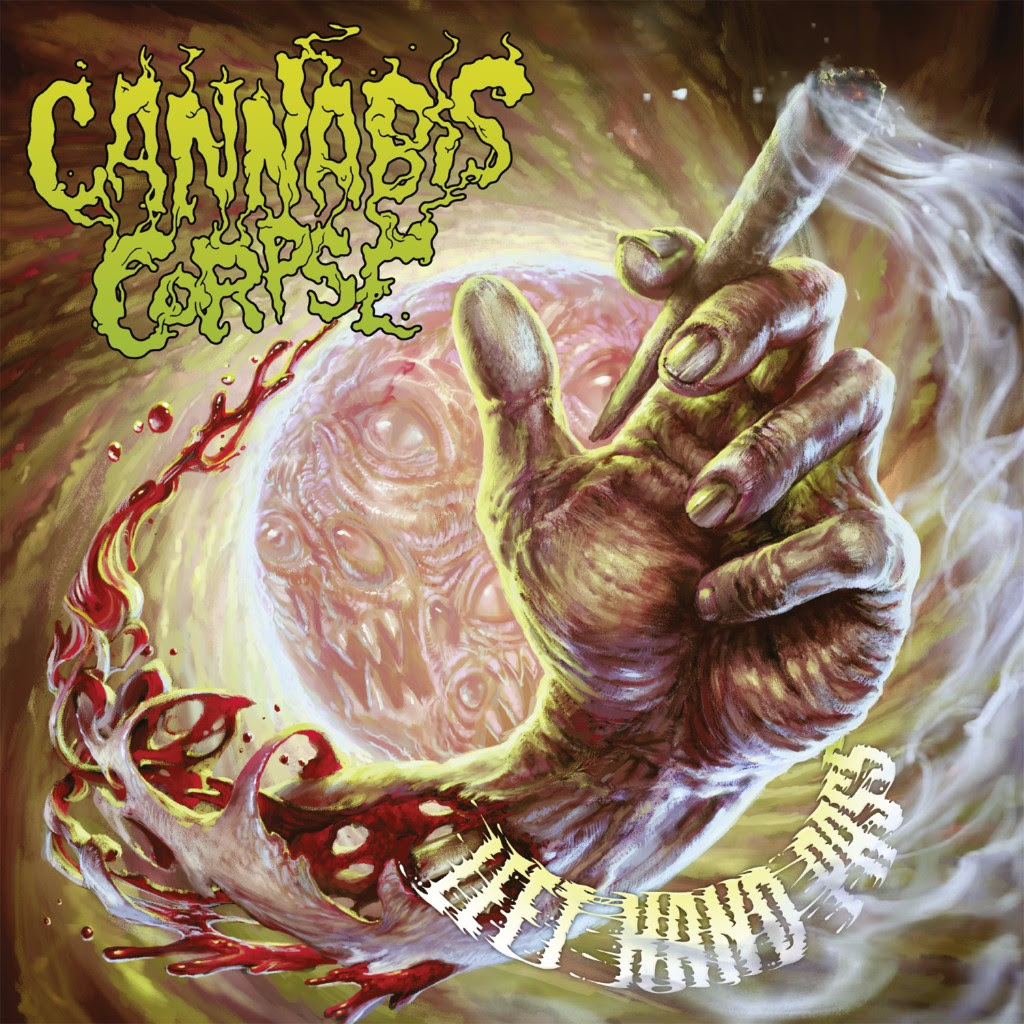 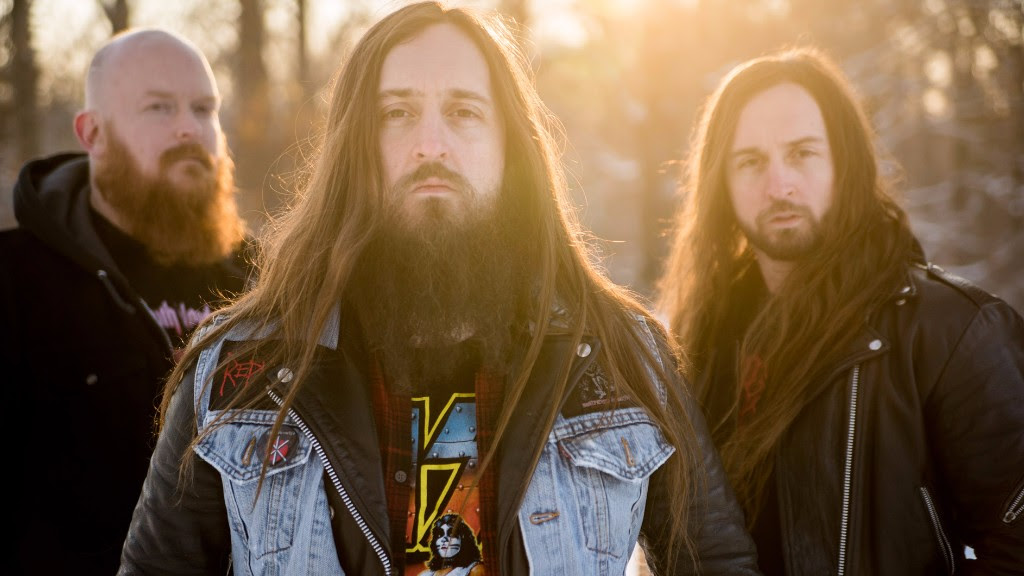 Turning a classic album title such as Entombed’s ”Left Hand Path” into a weedy phrase would normally be punishable by having to listen to the worst of modern talking on a continued play. Yet Cannabis Corpse not only get away with it, but the death metal and pot aficionados are actually doing exactly what their massive following is happily demanding of the Americans.

Cannabis Corpse were conceived out of a passionate love for Floridian death metal shared by Municipal Waste bassist/vocalist Phil “LandPhil” Hall and drummer Josh “Hallhammer” Hall, who created the band in 2006 in Richmond, Virginia.

Sharing a penchant for marijuana, the brothers decided from the start to leave the stereotypical genre subjects of gore, splatter, and horror behind and infuse a green sense of humor into their lyrics. Meanwhile, it has become a badge of honor for many of the Halls’ idols to have one of their titles turned into a tongue-in-cheek parody. And while there can be no doubt about what inspired a verbal monster such as “Papyrus Containing the Spell to Protect Its Possessor Against Attacks from He Who Is in the Bong Water“, the track-list of ”Left Hand Pass” may be read as a death metal quiz for sorts.

Cannabis Corpse immediately hit a nerve with their debut ”Blunted at Birth” (2006), while the following full-length ”Tube of the Resinated” (2008) and the EP ”The Weeding” (2009) demonstrated that the band was a musical match to those that they paid obviously tribute to the likes of Cannibal Corpse, Morbid Angel, Deicide, and Obituary. With ”Beneath Grow Lights Thou Shalt Rise” (2011), the Americans set another benchmark for keeping the old school spirit alive. Before the release of the fourth acclaimed album, ”From Wisdom to Baked”(2014), the spliff lovers’ complete catalog was re-issued on Season of Mist.

Now Cannabis Corpse are doing once again what they are best at and hammer out a perfect death metal album that combines straight-to-the-point songwriting with technical prowess. Time to fly high again with ”Left Hand Pass”!