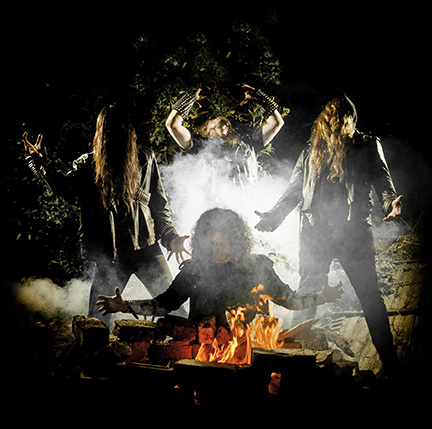 The four-year wait for new Craven Idol material is finally over as the band blasts back with eight tracks of ruthless, first-wave blackened thrash.

“Besides keeping true to our foundations, I wanted to create a much more pissed off and furious record,” said guitarist/vocalist S. Vrath in an exclusive interview with Decibel’s Sean Frasier. “We wanted to draw more on our black/thrash/crust influences such as (Germany’s) Poison, Bathory, and Master’s Hammer rather than Manilla Road, Venom, and Candlemass. I’m not saying those elements are missing, but the former is certainly more prevalent this time ’round.”

The stream and interview are available HERE.

”The Shackles of Mammon” will be released April 14 on LP, CD, and MC via Dark Descent Records.

Order the album now at darkdescentrecords.bandcamp.com.