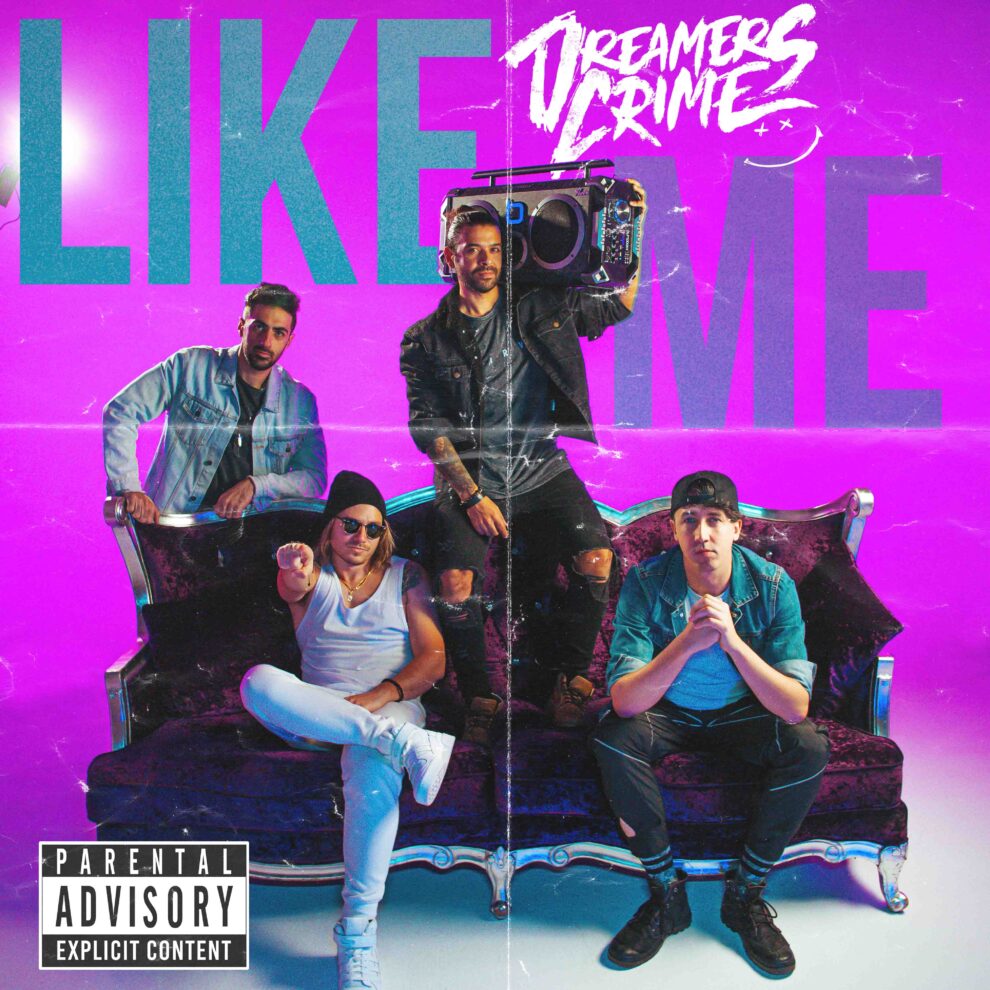 Australian hard rock crew Dreamers Crime premieres music video for “Like Me”. One of a kind rock/hip hop fusion of great spirit – that delivers only fun.

Here it is, the most interesting fusion of pop, hip hop, nu metal and rock. This song has this lively vibe – with pumped up atmosphere that adds only quality to the very core of the song. Since the most important part of the song is the atmosphere and vibe. It is for sure the crucial part and ingredient – that makes this song perfect. It has this catchy riffs – that are incredible adapted to the melodic structure of the song, it is also a part – with awesome hook, that will catch the listeners attention – good start for the beginning of the song. Then after this intro, comes this hip-hop moment with rapping from Vocalist Peter Repousis – that shows how the guys adapted in most smooth way, various sounds from pop melody to hip hop beat, to metal/rock riffing. Fusing it all together and creating this unique sound and special atmosphere. Not to mention that all of the influences by this genres are skillfully and masterfully adapted to each other. Creating this great hybrid that has catchiness to the roof and slams hard at the same time, that draws anyone who listen to it – instantly to listen to.

Every passage is adapted and made to sound so perfect – with outstanding arrangements, that were precisely planned for each part and passage – to create this effect of unusual balance, between various genres and melodies/sounds. This made the song an epic ride of great proportions. Technical side is quite coordinated and balanced – from drum set, riffing, beats, vocals and everything else. Production for this song helped a lot in creating more balance, pointing out the essence and best trades in the song properly. And this guys showed the best trades in their own unique style, bravely fusing three to four genres – showing how it is possible to create one flawless hybrid fusion – that has this intriguing groove and epicenes to offer. The best part of the song is chorus – that has this cheerfulness to it , followed by some smoothness, spicing up the entire song to the maximum – adding this cool flavor of explosive vibe . And of course followed by some background riff slamming that adds this effect of life to it, presenting this lively effect of non stopping energy from the band.

The most surprising and epic moment is a twist from all of the pop, hip hop and rock moments to this guitar shredding – like a culmination of the story itself, but the song, as well.  It completely catches off guard. And the band capability to transform from all of the influences to just – high class rock moment is priceless.  This shows the talent and dedication from this guys to their music. And of course the whole song shows the authenticity of this guys – to do their own thing in their own special and unique way. The song itself is quite authentic, showing the best sides of all four genres, pointing out only the best, only the priceless moments – that are powerful vision of the artists themselves.

Peter vocals can be described as an fast and furious ride – through epicenes of this song. The second most surprising thing in this song – is that he can shout, he can sing and rap all in one – in this song. He is versatile,  creative and original in his performance and quite good Vocalist, one more thing to add to. It is even hard to maintain one vocal range and scale, especially to have three vocal approaches in the song, but he presented it – with an ease and classy style to it. He is for sure the highlight of the song, just himself as it is. It is like watching some worldwide superstar dominating – with his attitude and presence. Peter lift up the song to the next level, staying in the mood all of the time – showing some real quality as a Vocalist, bringing up the beat greatly. Carrying the song in such magnificent way – that shows he’s talent and trades as Vocalist in most amusing and perfect way, there is.

The story of the song is about leaving Covid behind, entering the world of fun – not worrying. Living the life in fast lane, not falling down in toxic traps – just enjoying life and partying, since we all have this one to do it, not multiple lives  to waste. The video by Dave Hunter, shows visual mastery – that presents the essence of story in most quality way. Dave gave the life to this song visually, showing the bride side of the life in it and following the emotions of the song and it’s intensity – very professionally and creative.

Twists from slower parts to faster are astonishingly done by the band. It is just a perfect slide – that points out arrangement mastery, that shows this professional and quality approach on highest level. Especially this approach and perfect adaptation is showed in this three part/passage injection. From pop to hip hop and rock passages, everything is precisely and skillfully arrangement, but it not stands out from each other  – it basically blends in perfectly into one another.  Which makes this song one great sonic experience of heated up atmosphere, explosion of tasty sounds and melodies – wrapped in the spirit of all the genres that are in the song – that presents only the positive and rebellious essence to witness and consume – with your ears. It is dynamic song of epic proportions and people, doing the right thing and making even more greater music to listen to. It is a roller-coaster of  perfect experience in the world where fun lives – followed by high quality music and talented people – that offer quality and fun, as their trademark for a better tomorrow, followed by the powerful sonic sounds of enjoyment.

Embrace fun and freedom, you have no excuse – through the power of hard rock/hip hop mastery.

“Like Me” is special because we are completely ourselves with this. “We felt free to be ourselves coming out on the other side of covid lockdowns. Everything you hear or see with this track artistically represents the four of us authentically – we love to groove, dance, go out to nightclubs, party and have fun. “Like Me” motivates listeners to move on from struggles we’ve lived through, the crap we get consumed by and get back to what’s important.“

Hailing from Sydney/Australia Dreamers Crime are a four piece that continue to leave their own mark on the music scene, by treading the line between metal and rock they create hard hitting and explosive, anthemic tracks.

Co-founders Peter Repousis (lead vocalist) and Simon Kapsis (guitarist), together with Adam Plimmer (bassist) and Felipe Martelo (drummer), dance on the line between metal and rock to create hard hitting and explosive anthemic songs. 2021 saw the band release their record ”Here We Are” – with flagship singles “Silence” .

”Dreaming” and title song ”Here We Are”, which have become well known crowd favorites and showcase the band’s talent for huge and catchy choruses. In 2022 Dreamers Crime released a set of remixes of songs from the record, which has seen the band experiment with EDM style, leading up to their next song ”Like Me”. Here the band are furthering their sonic spectrum, taking influences from 90’s and 2000’s nu-metal and hip hop to evolve and create a fresh sound for themselves. Their journey through 2022 continues as they forge their name on the Australian and international music scene.

And with over 90,000+ Spotify streams, 68,000+ YouTube views, an EP, an record & various standalone songs. Having established themselves as one of the nations premier hard-rock acts, Dreamers Crime have shared stages with Trapt (US), Hybrid Theory (Portugal), Slapshock (PH), as well as securing slots at NRL, ANZ stadium for the Canterbury Bulldogs and touring South East Asia twice.

Earlier this year, the group unveiled a set of remixes from their debut record ” Here We Are” – which saw the band experiment with EDM style in the lead up to the release of ”Like Me”. And with more new music on the horizon combined with a ravenous hunger to utilize every weapon in their arsenal to deliver songs that are a true representation of the band, we can’t wait to see the new era of Dreamers Crime unfold.

Check out premiere for music video of “Like Me”, below: