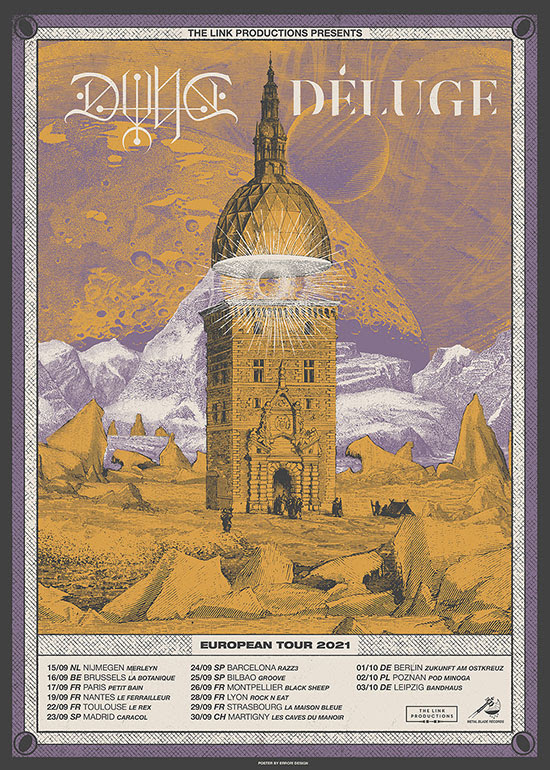 After releasing their sophomore album, Etemen Ænka, earlier this year – and landing on the worldwide charts for their efforts (#43 in Germany, #65 on the UK Indie Charts!) – Dvne has now announced a European co-headlining tour with labelmates Déluge. Kicking off in September, this will be the first run of shows in support of Etemen Ænka, before the band heads to the UK for an appearance at Damnation Fest, followed by a trek with Bossk in the winter.

Dvne are a band of great contrasts, weaving titanic heaviness and intricate gentleness together, complex lyrical ideas with engaging storylines, and this has only been expanded upon and concentrated on second album ”Etemen Ænka” (produced once again by Graeme Young in Edinburgh’s Chamber Studio). Exploring everything in greater depth in every way, it is a profound step forward from 2017’s Asheran, starting an exciting new chapter in the existence of one of the most thrilling and imaginative metal bands active today.

Guitarist, Vocalist and Keyboardist Victor Vicart states this about the new record:

“We knew we wanted to include keys and synths in the equation. We wanted to be able to add new textures and new sounds that weren’t on our previous releases, and we felt that this was something that will give us more options creatively. Looking back, that was a great decision because we’ve used synths for everything, with ambient sounds, heavy subs and actual leads, which really added a new dynamic to this album. We’ve also kept this balance between down-tuned heavy riffs and clean movements, which were already present in ”Asheran”, but we really wanted to make sure we could capture more details and subtleties once recorded.“

Synths are in fact so present, and at times so unapologetically 80s, that they sound like the soundtrack to a classic sci-fi, which may well surprise fans, the band confident in every step they took musically. The record also features guest vocals courtesy of Lissa Robertson, who sings on “Omega Severer” and “Asphodel” and contributes spoken word on “Weighing Of The Heart” – her voice adding yet another depth to the heavily layered collection.

A new Bandcamp exclusive vinyl edition of ”Etemen Ænka” – white with black dust (featuring a gatefold jacket, 2-sided insert, and poster) – can be pre-ordered now at: songs-of-arrakis.bandcamp.com. Limited to 200 copies, this vinyl will be released on August 13th, 2021 – reserve your copy now!

See below for all dates! Purchase your tickets now at: songsofarrakis.com/tour

Dvne with Déluge  2021 tour dates Presented by The Link Productions: