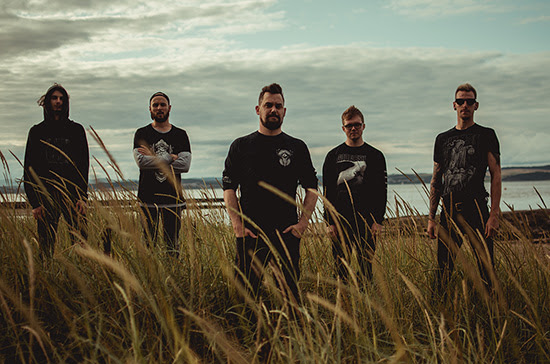 Metal Blade Records is proud to welcome Dvne to its worldwide roster! Founded in 2013, Dvne is a 5-piece progressive rock/metal band from Edinburgh, Scotland. With highly dynamic compositions venturing from delicate and intricate melodies to crushing and brutal soundscapes, Dvne‘s music takes its listeners through a deeply emotional journey filled with dystonia thematic, grand narrative, and other-worldly landscapes. Fans can expect their upcoming 2nd full-length album – and Metal Blade debut – in 2020.

“We are over the moon to announce that we have joined forces with Metal Blade Records. Working with such a legendary label and being among so many bands that have inspired us throughout the years is a huge honor.
Having just finished recording our next album, we are beyond thrilled on how far we’ve pushed our music and ourselves, and can’t wait to unveil it to you all with the support of one of the most iconic record labels in heavy music.”

To date, Dvne has released one studio album and two EPs. They emerged within the UK scene with their first EP ”Progenitor” (2013 – Wasted State Records), shortly followed by a second EP, Aurora Majesty (2014 – Sea of Corruption Records). At their releases, both EPs received very favorable receptions, with reviewers calling their releases “Progressive metal at its best” (This Is Not A Scene – US) and “Stunning and majestic” (Nine Hertz – UK).

Dvne quickly began to make a name for themselves in the UK and around Europe, with various shows throughout these territories alongside the likes of Eyehategod, Crowbar, Dragged Into Sunlight, among others. The band’s sound at the time was already crossing over different music styles, including post-metal, progressive rock and sludge metal, but it is with their first full-length album, Asheran (Wasted State Records), that the band further established their unique blend of heavy music. Released in August 2017 ”Asheran” was overwhelmingly praised by the press and was listed on many “best album of the year” lists.

Since Asheran’s release, Dvne has toured all over the UK, Europe and North America, appearing at prestigious festivals such as Psycho Las Vegas, Desert-fest London and Inferno Festival Norway. Not content to repeat their previous releases and always looking to push their sound forward, Dvne recently finished recording their 2nd album at Chamber Studio with producer Graeme Young. This new 10 track journey will be released worldwide via Metal Blade Records in 2020. Stay tuned for more news coming soon!