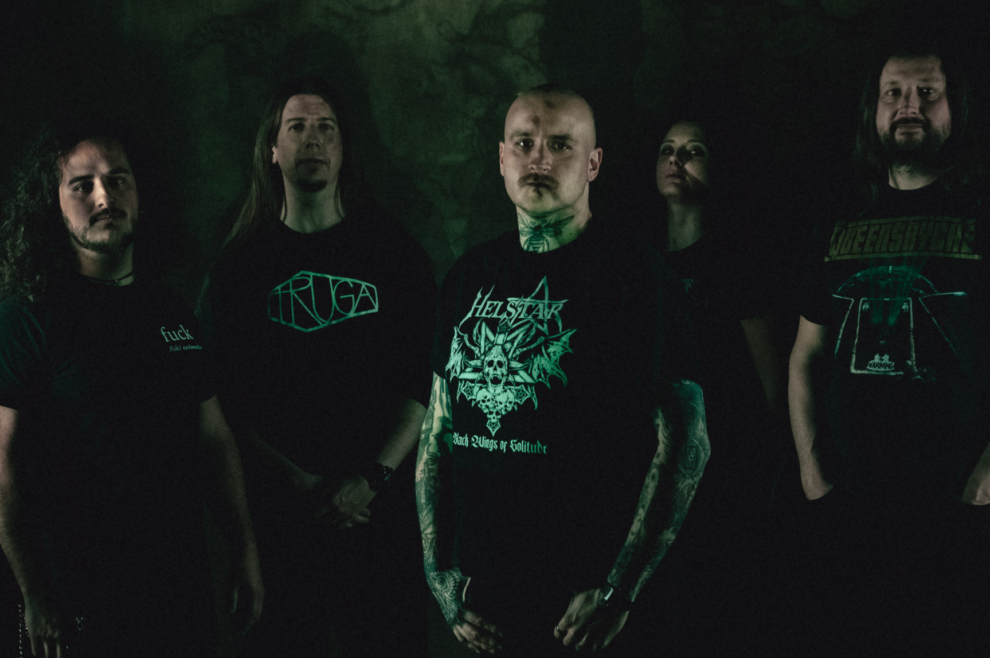 Slovenian thrashers Eruption premieres music video for “Worms”, taken from the upcoming record ”Tellurian Rupture”, which will be released on August 19th, via From The Vaults Records.

This song is an explosion of thrash metal assault, wrapped in speed metal raging  earthquake and powered by classical heavy metal domination. From the start, until the very end – this is one fast and crushing tune of uncompromising attack of high quality metal approach. It is coordinated and balanced in such smooth way – from flawless riffs, insanely good drum set and perfect vocal that have some true quality to it, all of this things are fused and balanced in this hypnotic synchronization, that works very well. Every detail of the song is precisely coordinated and arranged, so that this intensity and catchiness can be heard properly. And of course in technical terms, this guys did an outstanding job – showing their great musical skills and of course to show how should metal sound, it’s essence and hardness to the core, they surely did that – with this song.

It is fast and furious song, that has amazing arrangement’s to every passage of the song. Arrangement’s are completely and fully adapted to the song, every passage and part – has this unique adaptation – followed by sliding intense effect, from one passage to another. And it presents perfect atmosphere of groundbreaking and powerful sounds.

The best example of bands skillful approach is presented in drum set parts and guitar shredding in some parts of the song. This parts showed the true metal spirit of the song, also they are influenced by old school metal, which the guys fused in a great way – with good production. Pointing out this intense and crushing assault in best way – filled with some tasty metal sounds.

Then there are vocals by Vocalist Klemen Kalin, that added more of badass effect to the song. Klemen has a great voice, but also he has a awesome singing technique, that he mastered completely. That is also rare, since for this to happen – you need to practice and practice a lot. This worked out for him and he demonstrated – this perfect balance of his vocals through out the song and also the high range singing – he adapted perfectly with such coordinated approach in some parts of the song.

He showed his skillful vocal adaptation -to every passage and part of the song. He has completely control of his voice, every tone of his voice is precisely and skillfully adapted to the raging atmosphere of the song. His strong vocals and blasting energy go – with the songs structure in such remarkable way. It is not ease to follow up this song – since it is fast and ruthless,  it is hard to follow – but Klemen apparently did this – which such ease, showing how great Vocalist he really is. And presenting the true essence of old school metal and it’s best trades to max. His approach reminds of Rob Halford’s from Judas Priest – with his vocal technique – which is another great thing by Klemen, that he has this attitude and appearance in singing manner like Rob.  This shows that this band, wanted to show all of the best and orthodox side of metal. They did that for sure, it is blasting and unique experience of mightiness.

Eruption delivers only the eruption of blasting, raging and great metal music. Definitely eruption goes – with the bands character, it suits them very well.  This song is also an explosion of erupting hard hitting power – wrapped in culmination of metal quality. Ready to erupt, to consume everything in supersonic metal manner. It is everything that one metal song is, it is true metal song of old school domination.

Wake up, through the true eruption followed by glorious metal sounds of destruction.

Apocalypse is not necessarily a bad thing. The actual meaning of the word is ‘revelation’. And through the ages it was shown over and over again that ‘to reveal something’ is to ‘face something bad’. Of course, we could go on and on by asking ‘But what does bad actually mean?’ Let’s face it – doom or delight is in the eye of the beholder.

The apocalyptic concept behind the upcoming Eruption’s fourth studio record “Tellurian Rupture” is about bleak, dark, and heavy things. At least for civilizations, that is. Yet with a fall of an empire comes rebirth. Forged under the grey skies ridden with Covid-winds, when every prognosis seemed hopeless and induced despair, “Tellurian Rupture” was not an easy undertaking. Through perseverance, blood, sweat, and tears a behemoth of power-infused thrash metal was born.

“Tellurian Rupture” is Eruption’s most ambitious record to date. It’s epic, dark and technical, explosive at one time and brooding the next minute – yet it still maintains the foundation on which every Eruption’s record is filled – with catchy melodies, sharp riffing and memorable vocal hooks. The record is a gargantuan listening voyage, an emotional rollercoaster of anger, despair, fear, but also hope.  As the planet’s crust ruptures and ancient titans rise once more witness the destruction, embrace chaos, and welcome rebirth!

Formed in late 2004 – Eruption is a thrash metal band from Ljubljana, Slovenia. Throughout the years, the band has always kept fast, guitar-based and infectiously melodic metal as their mission statement, culminating in the releases of “Lifeless Paradise” in 2009, “Tenses Collide” in 2012 and “Cloaks of Oblivion” in 2017. All three full-lengths, accompanied by 2014’s “Live Transmissions” EP, saw the band explore classic machine gun thrash riffing accompanied by the soaring melodic vocals and sci-fi musings of vocalist Klemen Kalin. The energetic blend of influences allowed the band to present its music in a dynamic, furious stage show that saw Eruption share the stage with names such as Warbringer, Nuclear Assault, D.R.I, Iced Earth, perform on the main stage of festivals such as MetalDays and Underwall as well as garner excellent live responses from around Europe.

“Tellurian Rupture” will be released on digital, CD and LP (black/gold vinyl, limited to 300 units).

Check out the premiere for music video of “Worms”, below: