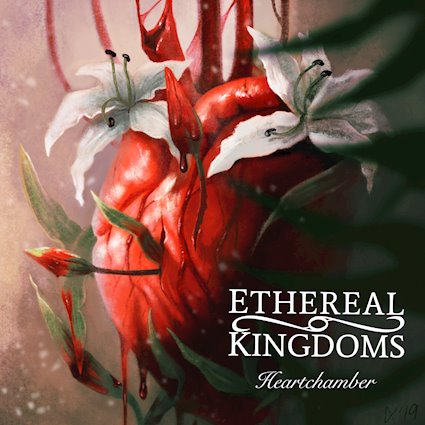 Ethereal Kingdoms premieres the music video for the song ”Heartchamber” and it will be officially released at May 3rd on Friday, it is taken from the upcoming new release which will be released in August this year, via Mighty Music Records.

When someone want’s to hear beautiful violin sounds, that are melt with some angelic voice into it, making the soul warm, this is the song for those kind of people, that like soft tones, with some melodic paradise power to it.

Why is this song so unique? It has that influence of the most known symphonic gothic bands like Nightwish, Epica ,Within Temptation.

It just has that pure romantic gothic essence to it, and it has also that technical divine balance between all the guitar parts and the melodic parts of the songs, and also the vocals are adjusted so well with the melodic parts, with the angelic tone and melodic divine sound, this song has all the gothic metal qualities with some amazing musical harmony to it, which will take a listener for a ride trough a beautiful story about love, but at the end, with not  such a happy end, because in life sadly nothing turns out the way it’s suppose to be, the two are broken and sad, and the love is gone, but the bound between them stays strong in their souls and mind forever, leaving the tragic story of love with some hope and faith in it.

It grows inside their chests, and they will remain in each other’s hearts for ages  sometimes for better, but often for worse. Like lost ghosts, they will walk inside the chambers of each other’s hearts, even if they are the cause of each other’s misery. Despite the bond being broken. We bleed because we loved. Somehow, it is beautiful in all its destructive glory. A beautifully bittersweet glistening tale of love and loss. The story draws on connections to the tales told in the band’s 2018 dual songs “Beginnings” and “Endings”, and the voice of the wrongdoer is embodied by Sofia Schmidt’s emotional vocals, featuring award-winning singer-songwriter Amalie Skriver on backing vocals.

Check out the premieres the music video for the song called “Heartchamber” here, enjoy it: