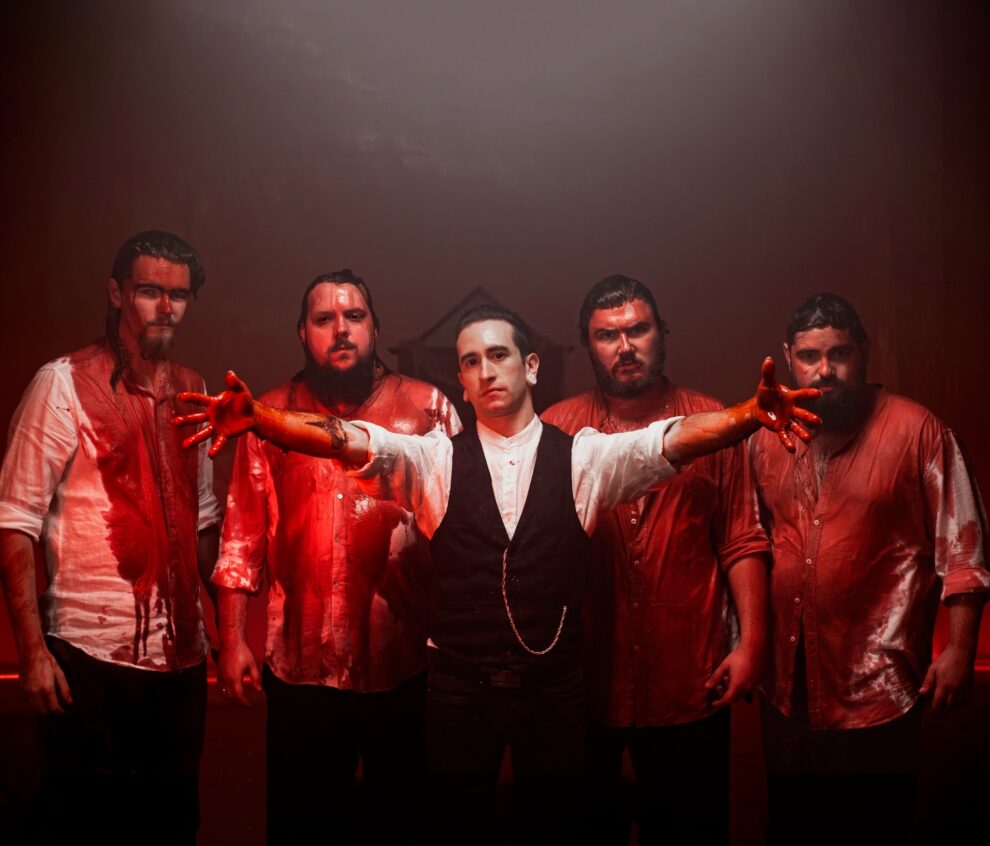 Australian progressive death metal/deathcore crushers Eviscerate The Crown premieres the music video for “Betrayer//Deceiver”. This is a dynamic blasting death metal crusher – that delivers the true essence of extreme metal form in the most original way.

This is one powerful death/deathcore demolisher – that has all of the best aural layers supported by the genres, that the band presents. It is also a complex one – with the variety of sounds and melodies, that are arranged perfectly to go with the crushing rhythm and brutal structure of the song. The complexity of the song, shows different aspects of it – with aural structure to the story one, making it a high quality extreme metal song. It is the seven minute song – that has a lot to offer, to give and show aurally and visually, as well. And also that unique experience and fusion of sound and imagery, that is done very well by the band – to occupy the listeners and viewers in the right way, not to lose their interest and attention for it.  The whole foundation from the riffs, generic riffs, drum set, vocals by  Liam Carroll are done so precise and coordinated – with the insane balance.

That means that every passage has this clean coordination, so that the other ones don’t sound like they are apart of the other songs. The passages are smoothly sliding into another, so that it can’t be heard that they are some small differences in them. Which shows that this guys payed attention to every detail of the song, shaping it and creating this greatly arranged song, that has this unreal synchronization – pointing out the mastery and professional approach by the band. Every passage brings the new experience, chancing the atmosphere through out the song. Giving something fresh and unique to experience, but not sounding different – making the whole aural concept and atmosphere of the song – into something special that has the strong and high quality structure to it. The best and most interesting parts are this melodic alien/piano pattern and the other one with the alien melody structure, as well – that sounded so trippy in every way – that had this cosmic progressive vibe to it, making the atmosphere of the song authentic – with the special vibe to it. Uniquely fused with riffs – that gave the riff foundation, this insanely melodic, loud and fierce effect, that catches off guard – from the start. And it made it progressive on a whole new level of progressivity, it’s just brutally good progressivity, wrapped in this loud and colorful aural pallet of the song – in the most outstanding way. The influences of the band for the song are basically from Rings of Saturn, Thy Art Is Murder, Periphery. Greatly and cleverly adapted influences created this vortex of brutality that shows the best sides of death metal/deathcore.

Liam for sure is a high quality growler, he shifts his vocal range and scale – for seven minutes to eight. Not to mention that he is doing it so coordinated and skillfully, staying in the focus through out the song, which is very hard even in studio to maintain and keep in balance – showing how awesome he is as a Vocalist. He’s shifting from deep growls to the screaming parts – is just something so powerful, showing he’s strong voice – with the perfect vocal skills, that he is presenting so smoothly and greatly.  And his vocals added more brutality and quality – since he’s precise and skillful approach gave the song this powerful and brutal quality, that it needs. The most special and amusing moment of the song is this atmospheric one – where Liam whispers. It sounds so haunting and unique  – with all of the haunting vibe that goes with the story perfectly. It also gave the song this incredible experience of something haunting, but it is also the best shift in the song, from this insane fierce and brutal atmosphere – to cold and calming/funeral sounds and melodies – adding more greatly adapted uniqueness to the song.

The story is inspired by the one of the famous vampires Nosferatu. Since he is deceptive and powerful entity – that is very dangerous and not to be trusted.  And you never know in chess – when you are becoming pray or you become a hunter, like in life. This is Nosferatu as well, deceiver, betrayer that deceives and betrays – for his personal dark needs. To win in this chess game – we call life, to gain more blood – with blood more power, he becomes stronger in the chess game. The guys from the band dedicated this song also to themselves, experiencing betrayal and deception from the closest people around them. You never know, when you are going to be betrayed – there are no rules in life, even the loved ones can hurt you the most. The guys presented this message in their own masterful and powerful way. Through Nosferatu they showed the evil nature of human beings. How they can be cruel and bad, even the closest people around you. The video is produced in a great way – goes along with the whole concept of the story, it is one more unique experience to embrace in visual way. The story is in outstanding way fused with the whole song, showing this message in the right way – that is wrapped in the brutal essence of the song greatly. This is a brutal crusher, that awakes extreme senses – followed by the best sides and trades of extreme metal domination and power – that shows the true strength and brutality of death metal /deathcore genres.

Follow the betrayer and deceiver into the path of darkness in death metal/deathcore essence.

Vocalist Liam Carroll states this about the new music video/song:

“Betrayer // Deceiver” is The Rook piece, and is known for his many betrayals and powerful deceptions. Inspired by the tale of Nosferatu, cursed for eternity, left longing to quench his undying thirst, this track is structured as three movements, throughout which Nosferatu exposes his different faces. This track represents the betrayals band members have experienced by those closest to them. A wolf may hide in sheep’s skins, but eventually through time they are revealed for who they are.”

No strangers to low-tunings, soaring screams and hooky melodies, the New South Wales natives have cemented their place as one of the country’s fastest-rising metal acts  with their signature livid intensity. Making an impressive debut with their EP ”The End Of Suffering” and follow-up single ‘‘The Abyss”. Eviscerate The Crown have been garnering coverage nationwide, as well as amassing 20,000+ Spotify streams with 9,000+ streams on ”The Abyss” alone. Forging full steam ahead, they toured Japan alongside The Faceless (USA), Suffocation (USA) and Aversions Crown (AU), followed by sold-out shows in their hometown of NSW at the height of the pandemic.

Taking advantage of the recent lockdowns, the group has been plugging away on new soundscapes of fear, theater, and grandiosity with their most mature material yet. This progressive death metal unit has created intense yet vibrant atmospheres, full of moments that take the listener on a sonic journey, rewarding them with intense payoffs by incorporating influences such as Periphery, Leprous, Northlane, Thy Art Is Murder and Karnivool. And with the release of ”Betrayer // Deceiver”, Eviscerate The Crown are sure to reach new heights in the heavy music realm within Australia and beyond.

Check out the premiere for music video of “Betrayer // Deceiver”, below: