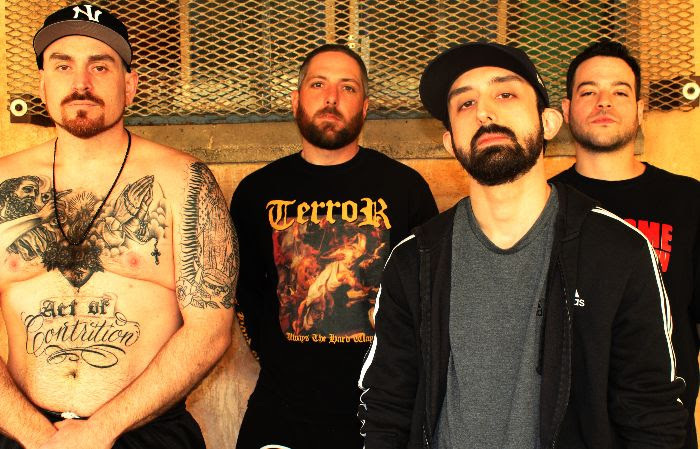 Releasing on June 10th – New Jersey based Eye Of The Destroyer are kicking off a new era – with the explosive song “What Goes Around Comes Around”.

The band states this about the upcoming song:

“It is really crazy the way this all kind of lined up. Before the pandemic we were going through some line-up changes and the chemistry with the other members was never really there. When the world started to open back up we reunited with our long time friend and original drummer Dave Mericle. It really changed things for us. It made making music fun again. This line-up has a ton of energy, attitude and I don’t think people will be expecting this from Eye Of The Destroyer.”

Initially formed in 2013, by Joe Randazza and Chris Halpin. The band spent five years touring the US pre-pandemic, and their first full-length ”Baptized in Pain” released in 2019. Now in 2022, reunited with original drummer Dave Mericle, “What Goes Around Comes Around” sees the band’s unyielding drive continue. Musically the new release leans significantly into the New York Hardcore influence of Biohazard and Madball while still showcasing the huge influence of Suffocation in the quartet’s sound. Eye Of The Destroyer recreate the anticipation and thrill of the mosh pit through deliciously distorted guitars, punchy percussion and unrelenting energy.

What are you waiting for? Dive straight in to this fierce, invigorating offering. Eye Of The Destroyer showcase a new direction in their journey through “What Goes Around Comes Around” and it’s one you won’t want to miss.

Album Credits:
Recorded at the Soap Factory in Roselle Park, NJ
Produced by Eye of the Destroyer
Mixed and Mastered by Joe Randazza

Check out the teaser for the upcoming song “What Goes Around Comes Around”, below: