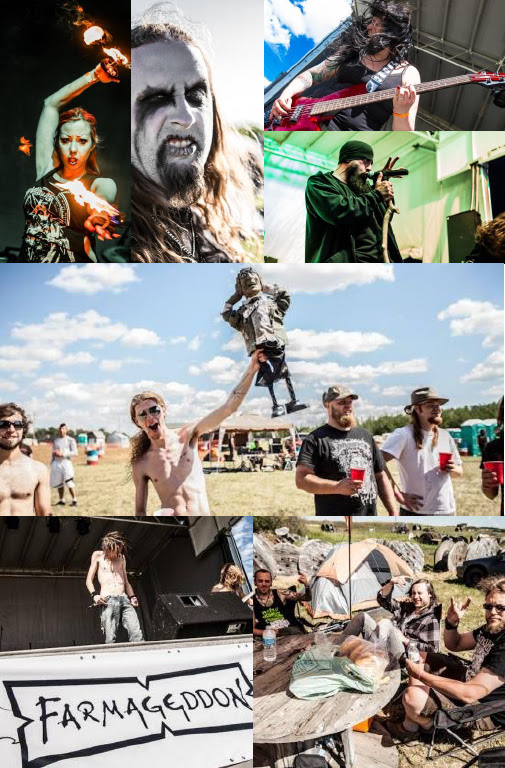 One of Western Canada’s loudest outdoor metal festivals Farmageddon Open Air organized by Prairie Fire Events Ltd. has launched a Go Fund Me campaign in support of their next event to be held in 2018. Prairie Fire Events Ltd. organized last year’s 2015 fest that saw headliners Grim Reaper from the UK, American bands Pallbearer and Incantation plus Canadian bands Into Eternity and Archspire along with many more from Western Canada metal scene for its third edition in Ryley, AB (80 KM East of Edmonton) from June 11-14. Plus Earlier this year, Prairie Events Ltd. held their first indoor metal fest and conference, ShrEdmonton with headliners Dying Fetus, Acacia Strain, Jungle Rot, Black Crown Initiate, Goatwhore, Finnish power metallers Thunderstone along with some of Western Canada’s best including Disciples of Power, Planet Eater, Scythia, Tylor Dory Trio, Every Hour Kills among many more.

Main coordinator Prairie Fire Events Ltd. Tyson Travnik issued the following statement along with a video explaining the Go Fund Me campaign for Farmageddon 2018 that will run until 2019.

By now, I’m sure most are aware that Praire Fire Events Ltd. is the not-for-profit incorporation responsible for forming the Farmageddon Open Air and Shredmonton metal festivals in the Edmonton, AB area. We are proud to bring these to you and have heard nothing, but great feedback since we started the first Farmageddon in 2013.

For our fifth festival, we are planning to bring you something HUGE in 2018. We are looking to dwarf anything we’ve done to date. It will take at least 2 years to fund raise for the event, apply for needed grants, etc, which we have already started to do. We are proud to host these events for the Canadian metal community and want to continue to do so.
That said, we are unfortunately struggling from a large financial hit due to the growing pains from the past few years, specifically Farmageddon Open Air 2015. A lot of variables came into play with the foul weather being a large part of it. This resulted in a large debt with one of our main investors. With deadlines set for payments and the downturn in the economy and job markets affecting us personally, we are struggling to make sure we don’t fall short of our payment deadlines.
We have quite a few fundraisers in the works over the next few months with some that require time to set up and promote properly. With this go-fund-me campaign, we are reaching out towards everyone that can help contribute to try to bring us back out of debt as fast as possible so we can start forming the backbone for the 2018 festival.
Every little bit helps, and goes a long way. We don’t forget our supporters, and you will be on top of our minds when it comes time to launch our next event. We want to bring western Canada a festival that will make the central Alberta heavy metal culture known worldwide for its professionalism, sense of community and belonging, and its rapport.
If you have never been to one of our festivals, (and even if you have), I encourage you to check out the Farmageddon Open Air 2015 promo video, brought to you by Prairie Fire Events Ltd. and Fade Back Productions. It’s a great demonstration of the caliber of events that we are proud to host.
Enjoy!
Cheers, and thank you for any and all your help!
Tyson Travnik
President

ShrEdmonton featured over 20 bands over the course of 3 days from May 4-6 at The Starlite Room and The Brixx Bar and Grill (same building), as well as a multi-room industry based conference located at the Shaw Conference Center. The full line up consisted of an ultra heavy hitting bill that included headliners Dying Fetus, Acacia Strain, Jungle Rot, Black Crown Initiate, Goatwhore, Finnish power metallers Thunderstone along with some of Western Canada’s best including Disciples of Power, Planet Eater, Scythia, Tylor Dory Trio, Every Hour Kills among many more! Plus there were clinics by Tylor Dory (Tylor Dory Trio) and panels at the Shaw Conference Center on recording, photography, video production, publicity, media relations, journalism, and concert promotion / talent buying for festivals / venues with music industry professionals from across Canada (full conference schedule and list of industry reps here).