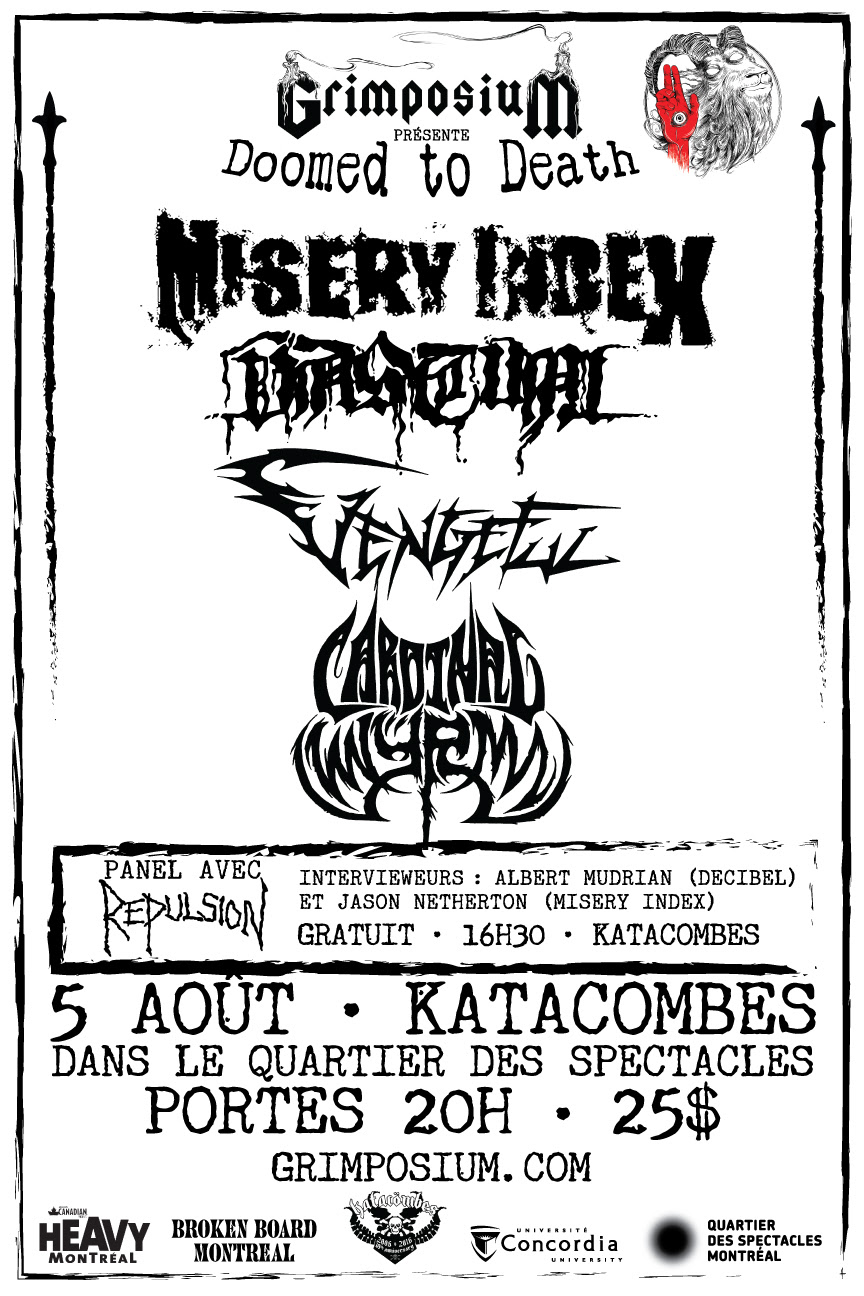 And on August 4, Grimposium will host the Canadian premiere screening of Death by Metal – the biopic of Chuck Schuldiner, late frontman of the legendary extreme metal bands Death and Control Denied – as well as a death metal vocal workshop, an industry panel on the economics of extreme metal and an academic symposium, all hosted at Concordia University (VA114 Cinema, 1395 Rene-Levesque Ouest).

All information about the festival is available on http://grimposium.com/doomed-to-death

The Misery Index, Vastum, Vengeful, and Cardinal Wyrm performance will take place at 20h00 on August 5 at Co-op Katacombes; tickets are $25 (Facebook event here; tickets on sale here). Jason Netherton, singer and bassist for Misery Index, says that the band “… is looking very much forward to Doomed to Death! TheGrimposium events are notably fantastic contributions to the extreme metal underground, and we are honored to be able to participate in this stellar event alongside such a ferocious mix of bands! Revel in Flesh!” Pranjal Tiwari, drummer and vocalist for Cardinal Wyrm states: “We can’t wait to return to Montreal, one of our favourite cities, and we have an album’s worth of new songs since the last time we played there. The bill that Grimposium has put together is a varied and interesting one with a bunch of stellar bands from different subgenres – we are very excited to bring the audience down into the belly of doom metal during our set, and lay a pall of heaviness over the evening’s proceedings.”

The live interview with Repulsion is at 16h30 at Co-op Katacombes; it is free and open to the public. Scott Carlson and Matt Olivo, founding members of Repulsion will be interviewed by Albert Mudrian of DecibelMagazine and Jason Netherton from Misery Index about their role in the development of the genres of death metal and grindcore, and the influence that Repulsion has had on the global extreme metal scene.

The Death by Metal screening is free to the public and will take place at 19h00 on August 4 at the VA114 cinemaat Concordia University (Facebook event here). There will also be a post-screening Q&A with director Felipe Belalcazar. The screening will be preceded by a death metal vocal workshop led by Marie-Hélène Landry ofObsolete Mankind and Sébastien Croteau of Necrotic Mutation. In addition, the event includes a bilingualpanel on the Economics of Extreme Metal with Jason Netherton and Mark Kloeppel (Misery Index),Michael Berberian (Season of Mist), and Michelle Ayoub (Broken Board Montreal).

Finally, the Doomed to Death Academic Symposium will be held from 12h00 – 14h30 on August 4 atConcordia University’s Department of Education (FG 5.345, 1610 Rue Ste Catherine). For the first time since its inaugural event, Grimposium will feature a symposium featuring the academic and professional work of members of Misery Index and Vastum. Daniel Butler from Vastum, as well as Jason Netherton and Mark Kloeppel from Misery Index will explore the intersection of psychoanalysis, media studies and tourism management in the domain of extreme metal music studies and showcase their respective graduate research and professional projects (abstracts and more information are available here). The session will be moderated byConcordia University’s Lee Mellor, a SSHRC doctoral fellow, and a PhD Candidate in the Individualised program. The event is open to the public and refreshments will be served.

Grimposium is an international touring festival and conference which brings together musicians, visual artists, journalists, writers and record label executives in the global extreme metal scene. Created in 2014 by metal studies scholar Vivek Venkatesh from Concordia University in Québec, Canada, Grimposium has hosted editions of its festivals and conferences in Montréal, Canada (April 2014, August 2015 with Heavy Montreal, April 2016 and July 2016), Bergen, Norway (November 2015), Bay Area, California (January 2016), Brooklyn, New York (April 2016) and Philadelphia, Pennsylvania (April 2016 – with Decibel Magazine). We have upcoming events in Montréal on 4th and5th of August 2016 with Heavy Montreal, and the New York by Norse events in December 2016. Follow us atFacebook to get the latest news. Our team consists of Vivek Venkatesh (creator), Kathryn Urbaniak (manager), Jason Wallin (partner) and David Hall (partner). Our logo and Baphomet was designed by Filip Ivanovic, and Alex Pelchat-White is our graphic designer.