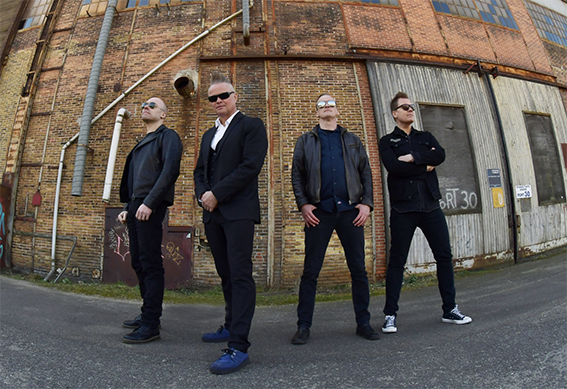 Grumpynators premieres the third song and music video “Dream Girl” from their upcoming record “Still Alive”, which will be released in August 28th, via Mighty Music Records.

If you dig punk/rock majestic sounds of true punk madness, you are at the right place. After the successful videos for the songs “Blood and Bones” and “Still Alive”, here it is the “Dream Girl” a cheerful song about teenage crush that has influences from the bands Green Day, The Ramones and from Elvis Presley, as well – that are very well adapted into this song, making it a one truly catchy/relaxing and outgoing song, that will make this summer for the listeners even better in this strange times that we are all in.

The fans of the punk genre and the fans of the band will for sure love the positive and cheerful vibe of this song, that will make they day better, also to remember their high school crush maybe, remembering those sweet innocent times of happiness. This song has that true 50’s  and 60’s spirit, as well as the punk one, which made this song with all of it’s positive and out going attitude, the true summer song that will rock someone world.

Get your dream girl through the sounds of the punk-rock glory.

Drummer Per Fisker states this about the new music video/song:

“Get ready for a feel-good summer song. It is a happy, careless, uptempo rock-song that takes the listener back to the sound of the ’50s mixed up with punk rock inspired by bands like Green Day and the Ramones”“It’s the story about the teenage obsession of a girl, and how boys feel at that age when the hormones kick in. When Michael Poulsen from Volbeat heard the forthcoming album, “Still Alive”, he pointed out “Dream Girl” as his absolute favorite. Give it a spin and see if you agree with him.“

Four guys from Copenhagen with very diverse backgrounds – two guys come from the rockabilly scene, one guy from classic heavy metal, and one guy from hard rock. Imagine a mix of Social Distortion, Motörhead, and Stray Cats supercharged with adrenaline and testosterone, and then you get Grumpynators.

A hard-working Danish act, who already has played a lot of concerts everywhere in Europe from Northern Norway and Northern Finland to Germany, Holland, Austria, and Switzerland. They have supported Danish heroes Magtens Korridorer and have also been the only Danish act to support Volbeat, on a tour in the last ten years. In 2020 they release their 3rd album, “Still Alive”, in collaboration with Mighty Music Records, with the pure intention of taking over the rest of the world.

The album “Still Alive” will be released as a CD, digital, and in three different vinyl formats (black, orange cloud, and red/blue).

Check out the premiere for the official music video for “Dream Girl”, here: