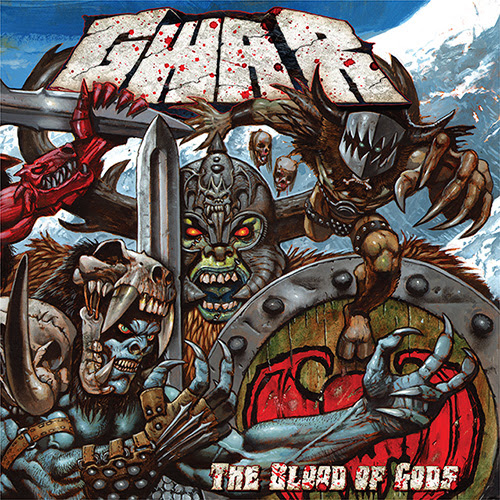 The time has come, your Lords and Masters GWAR have unveiled the details of their latest masterpiece “The Blood of Gods“. Today the first single “Fuck This Place” is available for audio and video streaming. Check out the song and pre-order your copy of “The Blood of Gods” at metalblade.com/gwar! Your Intergalactic Overlords demand it! Digital pre-orders include an instant gratification download of “Fuck This Place“. Limited edition special bundle packs are available for pre-order as well.

“The Blood of Gods“, produced, recorded, mixed and mastered by Ronan Chris “Lord God” Murphy, will be released October 20th via Metal Blade Records. The album will be available in Standard CD, 2LP Colored Vinyl and Digital formats.

The Berserker Blothar stated this about the song ”Fuck This Place”:
“Fuck This Place,” the name says it all. Look around you. Your life sucks. Your planet is dying. You want to kill yourself and everyone you meet. So do it. You’ve drenched yourselves in gasoline, and now GWAR offers you a light. The finish line of the human race is at last within reach. Scream it now at the top of your lungs…”Fuck This Place!”

“The Blood of Gods” is nothing less than a sacred text chronicling the rise of humanity against their makers, and the massive battle between GWAR and the forces of all that is uptight and wrong with the world. Along the way, the band challenges the sins of their great mistake, from politics, pollution, and organized religion, to fast food, and factory farming. Humans are shown as what they are; a parasitic disease that must be eradicated before they suck the planet dry.

Sleazy P. stated this about “The Blood of Gods”:
“Sorry scoffers, you thought GWAR was finished? You’re the one who’s finished when GWAR starts their fall tour after dropping their heaviest album yet. “The Blood of the Gods” will be the soundtrack that covers up your pathetic cries for mercy. So go ahead and scream all you want. Just make sure your in key or your death will be excruciating beyond comprehension.”

Check out the live music video for the ”Fuck This Place” here, enjoy it: