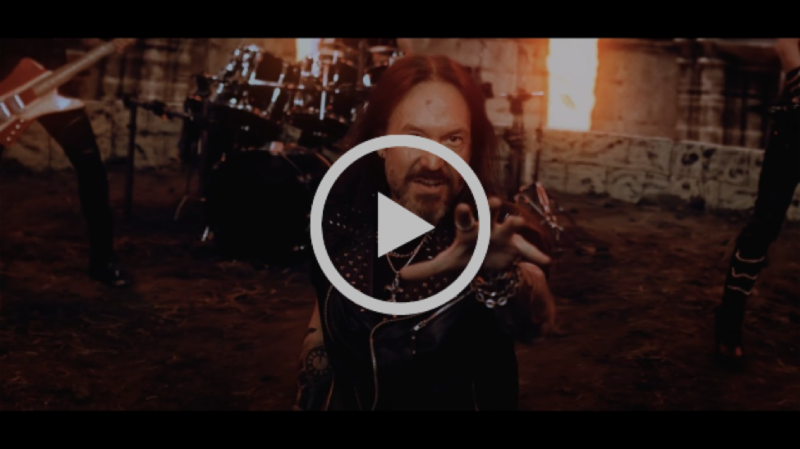 Hammerfall return with their new smashing single to continue their dominion of the world. ”Welcome to Pandemonium, the Capital of Hell.”

Hammerfall release their third song and title track “Dominion” off their new album ”Dominion” and accompany that release with a breath-taking new official video, which was officially premiered on legendary Wacken Open Air festival in front of 75 000 screaming heavy metal Templars of Steel! Finding inspiration in the great poem Paradise Lost, ”Dominion” is about the archangel Lucifer’s fall from the Heavens, down to the pit, and how a warrior shaped demon lord came to conquer them all. Be prepared for heavy riffs and epic vocals.

Vocalist Joacim Cans states this about the new song and music video:

”After the great success with the “(We Make) Sweden Rock” video, we needed to take the “Dominion” clip to a whole new level. Since it was impossible to take it higher – we decided to descend to Pandemonium, the Capital of Hell!
With great CGI effects the storyline walks hand in hand with the lyrical theme and never before have we had so much fun recording a video.”

Oscar Dronjak states this about the music video and the song:
“The riff and the most part of the first half of the song was written and conceived on a family vacation in Florida. The rest was completed on tour with HammerFall, which is a first for me as a song writer; I’ve never written anything at all while on the road before. The massive guitars and the pounding drums gets us started, but it’s really in the verses and choruses where the song really comes into bloom. You will not be able to get the chorus out of your head, and in this case it’s a good thing”
“Dominion” is Hammerfall’s eleventh studio album, and second with Napalm Records. “Dominion” is available as CD, Vinyl, and a limited edition Deluxe Box Set consisting of a digipack, limited 7” light blue vinyl, limited cassette, cover art print, photo cards, patch and sticker.
For “Dominion,” Hammerfall re-teamed with James Michael to do vocals at Red Level Three studios, and Fredrik Nordström of Studio Fredman at Castle Black Studios for the instruments on the powerful 12 song
collection.
The band states this about the new song and the music video:
“Good is not good enough; it has to be great. This is the mantra we have applied to every aspect of making this album, from the song writing and rehearsals to the production and the performance of each member. The result is “Dominion,” a powerful force of nature that cannot be stopped. Once you hear it, you will understand.”
Tour dates:
10.08.19 ES – Valencia / Leyendas Del Rock
16.08.19 DE – Dinkelsbühl / Summer Breeze Open Air
17.08.19 AT – Graz / Metal On The Hill
29.08.19 CO – Bogotá / Royal center
31.08.19 CO – Pereira / C.E. Prestige
01.09.19 CO – Cali / Teatro Jorge Isaacs
02.09.19 CO – Pasto / tba
04.09.19 CO – Medellín / Teatro Universidad de Medellín
05.09.19 CO – Bucaramanga / Auditorio Luis A. Calvo
07.09.19 US – West Hollywood, CA / Whisky A Go Go
08.09.19 US – San Diego, CA / Brick By Brick
10.09.19 US – Brooklyn, NY / Brooklyn Bazaar
15.09.19 JP – Tokyo / Zepp DiverCity