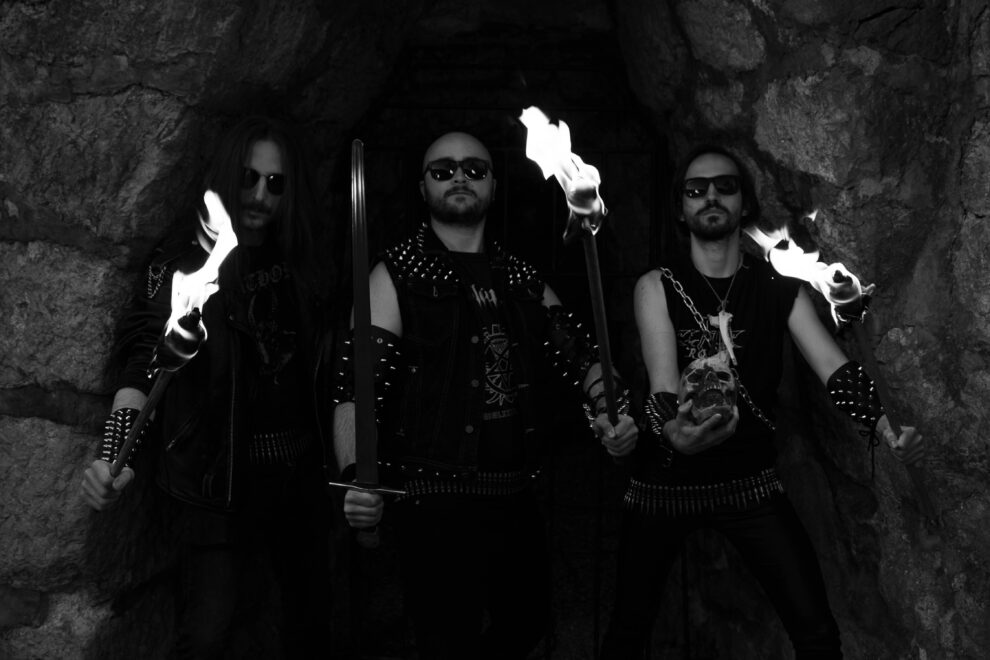 Slovenian black metal masters Hellsword premieres the new official song ”Chains of Mortality”, taken from the new official upcoming record “Cold Is The Grave”, which will be released on 24th September, via Emanzipation Productions.

Like every first wave black metal classic, followed by classical heavy metal influence – it shows how the orthodox black metal, the first form of it – is so powerful and dominating. This song is a perfect example of it – presenting the best side of the first wave of black metal, the best way possible. The song starts with this smooth drum set, catchy crushing riffs – continuing in fast and furious manner –  that is very well adapted to the screams and growls in the song. All of this is so very well adapted to the whole song, staying true the whole genre and cult of it. It is just one big dominating badass trip to black metal eternity.

Basically influenced by the very best of the first black metal wave. The band delivers with the production- the old school sound, that haunted atmosphere that has that true and orthodox dominating power of the genre. And the guys just did a flawless work, reminding all of the extreme metal fans, how it all begin and also about the true metal essence. It is so refreshing to hear this kind of sound, approach to music, “take it or leave it approach” – that was present at the times. And the extreme metal fans, especially the black and thrash metal fans will like this song.

Even with the old approach of not re-producing the song to much. The band made this outstanding balance between riffs, drum set and vocals by Ironfist. The arrangements are done so perfectly that you can actually listen to the parts of the song perfectly, that can be heard probably – but at the same time it is old school black metal song, it didn’t lost it’s essence. It is improved with the small details in the song, not changing the whole structure of the genre, to be something else and that is the most awesome thing about it – it’s wildness and toughness.

There are variety of influences in this song, from heavy metal, thrash, speed metal and black metal. Since black metal was in it’s beginning closer to this genres. And they portrait this influences perfectly, not changing the genre, just showing it like it is – the whole concept and the main point of it. This song is just the vortex of domination and wickedness of true orthodox black metal, that takes the black metal to a whole new level.

Time for the debut Hellsword album is drawing closer and today a new song from “Cold Is The Grave” gets unleashed. “Chains Of Mortality” captures perfectly the spirit of the Slovenian trio: it’s raw, it’s heavy and it summons the spirit of the greatest bands of all time: Hellhammer, Venom and Bulldozer!

Slovenia’s answer to the first wave of black metal, Hellsword’s goal has always been to exhume the most ancient blackened speed metal out of the crypt it had been unrightfully interred into. Formed in 2009, the band has developed a cult following after the release of their demo ”Blasphemy Unchained”.

Drawing influence from early black metal pioneers such as Venom, Bathory  and Hellhammer as well as newer bands like Destroyer 666 and Nifelheim with an added touch of heavy metal, the trio comprised of Mark Massakre, Mike Manslaughter, and Ironfist now returns with their first full-length album, “Cold Is The Grave” to be released in September via Emanzipation Productions. It builds upon the band’s previous work with nine tracks ranging from face-melting speed to slower paces and dealing with topics such as devil worship, the end of the world, death, desolation, mortality, and the absurdity of human existence.

Ever since its formation, the trio has been dedicating themselves to the pursuit of bringing back the sound, feel, and atmosphere of the first wave of black metal. The band has, besides the now cult demo “Blasphemy Unchained” also released the “Sounding the Seventh Bell” EP and has played numerous shows both in Slovenia and abroad.

Check out the premiere of the new official song “Chains of Morality”, below: