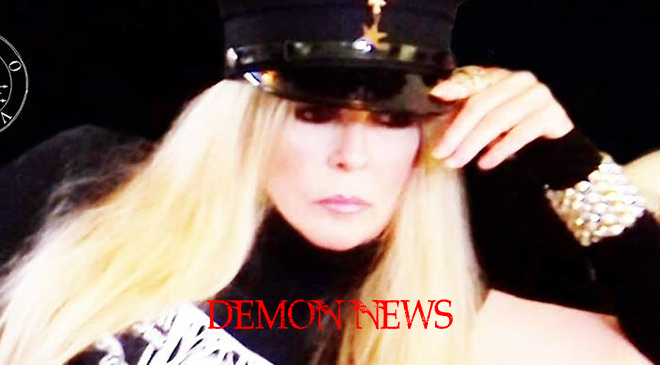 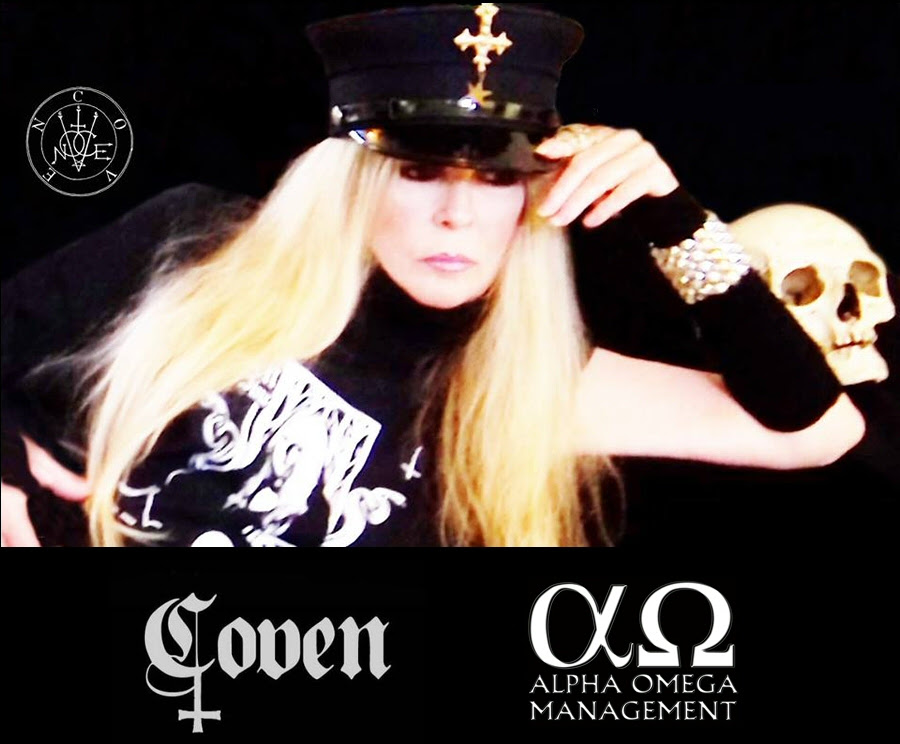 Only few women are as essential and enigmatic for the world of rock as High Priestess of Occult, JINX DAWSON – forming the Almighty COVEN in the late 1960s – creating so the bedrock for a real iconography, the significant landmark for the establishment of the foundation of “how to” and “when” the occult were introduced into music. JINX DAWSON is the idol, role model, paragon and the “reason to be” for many great names out there, as Black Sabbath, Black Widow, King Diamond and many more!

The major parts of today’s “Satanistic bands” (like Behemoth, Deicide, Venom etc) have taken inspiration from COVEN. Furthermore, not known by many is the fact that Jinx Dawson was the first ever to use the “sign of the horns” on stage, starting in early 1968.

Jinx Dawson, High Priestess Magus and lead singer of The Coven announces her pleasure that the band hath forged an alliance with Alpha Omega Management:
“We look forward to working together in Magick and Musick… And we are wickedly excited to perform for our Cherished Friends at future concerts…\m/”

ALPHA OMEGA Management adds:
“With our deepest honor and pleasure we announce that Jinx Dawson and Coven have entered the building! We look forward to bring forward the Magick of Occult with the upcoming rituals by the one-and-only Metal Goth Queen and Her Court! May this legacy be strong and alive until the times to come! \m/”

Jinx and Coven conclude:
“Meanwhile, after having discussions with numerous talent managers and record labels, Coven is happy to announce a partnership with Alpha Omega Management, whom they feel is a world class organization with enough industry muscle to protect the band’s interests and assure that Coven returns to the forefront of the industry, both live and on record, in a way that serves to both enhance and protect the legacy created decades ago.”

Recently in the COVEN’s Universe:

2013 saw the return of Coven to the forefront of the music world with the release of Jinx, the first new album of music in almost twenty years. A collection of rock, pop, psychedelic, and metal anthems with contributions from Chicago metal/industrial supergroup Wolfpack 44 and avant-garde Indianapolis stalwarts We Are Hex, as well as a number of unreleased Coven hymns given a re-work in the studio, the Jinx album proved that the test of time had not faded Coven’s luster one bit and served to reassert enigmatic frontwoman Jinx Dawson’s dominance as THE occult rock Queen, a standard she had set decades earlier with the 1969 release of the now-fabled Coven classic ‘Witchcraft: Destroys Minds And Reaps Souls.’ And with the epic photos on that album, being the band pictured that first introduced the  “Sign of the Horns” to rock, metal and pop culture.

Says Wolfpack 44 guitarist Ricktor Ravensbrück: “I’d contacted Jinx about creating a sigil for my band, and we slowly became friends and eventually co-conspirators. My band was recording in Chicago and because Jinx and I started conversing, I thought it might be great to record a cover of Coven’s classic “Wicked Woman”, and dared to hope against hope that I could convince Jinx to lend her vocals to our version of her epic song. I sent her the rough mix of the track, and another I’d written – which would end up becoming “To The Devil…A Daughter”, versions of which appeared on both the Jinx album as well as my own. She must have liked what she heard because much to my delight, she agreed not only to reprise her vocal on the Coven song, but also wrote lyrics for and sang on the other track as well!” As a result of this perhaps predestined collaboration, Jinx travelled to Chicago several times to record some vocals and finalize the last tracks that would comprise the Jinx album, which was unleashed upon the world on Halloween of 2013, to virtually unanimous acclaim, from both critics and fans alike. Coven was back!

As great reviews started to accumulate, so did the offers worldwide for live performance. Proving itself a timely process, Dawson and Ravensbrück – who’d offered his services as Coven’s live guitarist – began holding auditions in 2015, a process still incomplete at the time of this writing. However, the two determined that if the right players could be found, and a proper team assembled to represent the interests of the band, then Coven would indeed return to the live stage.

Walpurgis of 2016 saw Coven release the two song EP “Light The Fire” which only served to whet the whistle of rabid fans worldwide, and was planned as merely a teaser until a new full-length Coven album could be recorded. Pre-production has begun, although no timetable for said release has been established.

Meanwhile, after having discussions with numerous talent managers and record labels, Coven is happy to announce a partnership with Alpha Omega Management, whom they feel is a world class organization with enough industry muscle to protect the band’s interests and assure that Coven returns to the forefront of the industry, both live and on record, in a way that serves to both enhance and protect the legacy created decades ago.

“As exciting and fulfilling as it’s been to work with Jinx & Coven, a band I’ve idolized since discovering that first record back in high school, the thought of sharing the stage with her is even more so. I can say with authority that Jinx has lost none of the vocal power and allure that has elevated her to legendary status
today. Occult rock has seen a resurgence of late, and today’s purveyors of the form most certainly owe a debt of gratitude to Jinx. I hear and see her influence everywhere, and the time is right for the band to reassert their dominance. And with Alpha Omega steering the ship, I feel confident that we’ll be in qualified, capable hands. Which frees us to pursue what matters most: the music” says Ravensbrück. So mote it be!

Watch the video teaser for the latest release from Coven, “Light The Fire”, out on April 18th, 2016 exclusively from Nevoc Musick

WORMREICH To Tour With KHAOTIKA!
“Guerrila” docummentary about Dorsal Atlantica will be exhibited in an independent movie festival